This is Marie, whose usual contribution to the blog is to order something my husband didn’t so he can get menu envy, or to describe some experiment that made it to the dinner table and turned out well. This time I am departing from tradition to describe our pre-anniversary dinner at Farm Burger, a locally owned burger joint that uses meat from animals that didn’t spend their lives in a box or being force-fed things they probably wouldn’t eat otherwise. We found out about the place from an AJC review, and from David, who gave us a glowing recommendation.

Now, regarding how animals were treated before coming to the table, I am quite willing to spend three times as much on animal products from humane sources. Farmer’s market eggs are a particularly good example, because they taste so much better than the plastic they sell in egg cartons at the grocery store. In this case, however, this good quality stuff is fairly comparable in price to the midrange ordinary. It was about $16 for the two of us to have a burger each and a nice-sized bucket of fries to share. How great is that?

The place was busy when we got there Saturday night around 8. All the tables full and only a couple of seats free along the side bar. We only waited about ten minutes to get to the counter and entertained ourselves by inspecting the menu, which contained topping options such as arugula and bone marrow along with the usual suspects–except ketchup. You can get that at the table, but it is not something they appear to believe ought to be on a burger. The ladies ahead of us in line asked the cashier if it was always this busy, and were told that this was slow.

After admitting this was our first time, we were asked about our doneness preferences and medium was suggested. This is something I’d read in comments before about grass-fed burgers–that you can’t let them get too done or they lose the special something that makes them so great. There was a table outside sitting empty when we carried our drinks and order number away to find a seat, and it was lovely weather so we braved the risk of smokers to enjoy the fresh air.

The food arrived quite promptly in little wire baskets lined with brown paper, and the fries were in a little tin bucket of the type that usually contains a mosquito repellent candle, also lined with brown paper. My burger had cheese and tomato, and Grant got one with tomatoes, red onions, chipotle mayo and mustard which he says was wonderful. (The general consensus is that despite the full menu of wild toppings, it is very easy to overwhelm the flavor of this beef, and keeping it simple is probably the ideal way to do it.)

They’re lower in fat than feedlot beef, although you’d never know it, as they were also incredibly juicy. That first bite was just wonderful. The rest were, too, but we’d had a steak recently that was pretty decent, and it didn’t have as much flavor as this burger did. And they were more filling, too.

We have a favored local burger joint whose meat patties are as large and whose buns are more substantial, and who have much bigger fries portions, but the meals we eat there aren’t as filling as these Farm Burger selections. Maybe it was that we’d had a substantial lunch that day, but I like to think that the food tasted so good it slowed us down, made us savor it more, and was as a result just more intrinsically satisfying. We’ll definitely be going back.

(Update): In 2011, Farm Burger opened a second location in Buckhead. With our baby in tow, we stopped by this location a week before Christmas, confirming that these are among the best burgers in the city. They are certainly Marie’s favorite. They’re in the strip mall across from the Disco Kroger, downstairs from a Ru San’s. 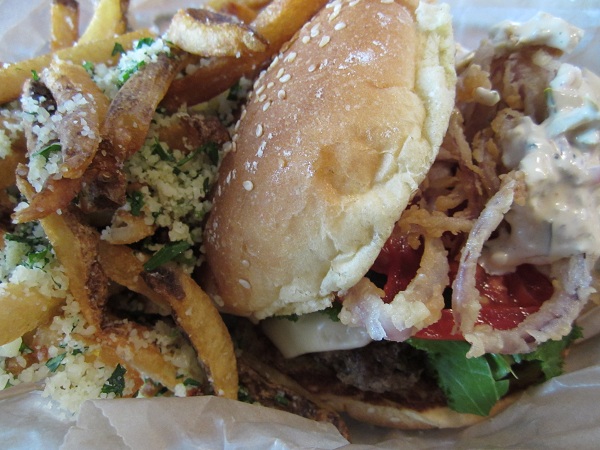 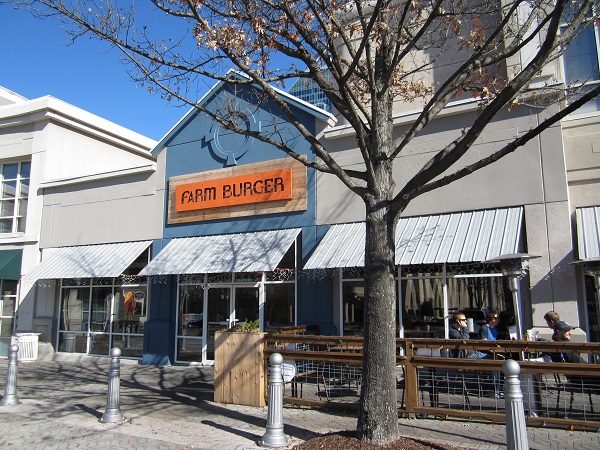 Pictured is a daily special, a beef burger with pepper jack cheese, mustard greens, tomatoes, fried onions and FB sauce, along with a pile of very good fries buried under garlic and parmesan. Marie had her burger with beets, goat cheese and arugula. The food, the service and even the music were all excellent. Marie really enjoyed being introduced to a singer named Mike Snow. We really do like this place a heck of a lot.

Other blog posts, among many, about Farm Burger: