“Oooh, there’s a barbecue place,” I said. Four years ago. Well, you might have thought that I teased Marie enough two chapters previously. But this place, good grief. It took something like a dozen trips down here for Marie to finally add Southern Soul Barbeque to our island to-do list. She then began kicking herself for waiting so darn long. I just had to shake my head a little as she made happy faces and happy noises over the excellent pulled pork here. My silly, silly wife, waiting so long for a trip here.

And it isn’t like I mentioned it just the once and let it sit. Even back home, when I didn’t have the opportunity to be driven around that godawful traffic circle where the restaurant sits and point it out – really, up in Boston, they’ve somehow developed these idiotic intersections that are like traffic triangles and even those make more sense than this brain-dead, zero-visibility, criminally-engineered thing – I occasionally found mentions of Southern Soul in the media that made it necessary to remind Marie that there appeared to be some good eating down on Saint Simons.

I read that the building, an old gas station, had been destroyed by fire but that they hoped to rebuild. I read that they set up temporary quarters at a concession stand down on the Coast Guard beach. I read that they were being featured on Food Network’s Diners, Drive-Ins and Dives. I read that the original building reopened, to applause and congratulations and good wishes. I started getting comments from readers telling me how I needed to try this place. And I looked at the Chinese Zodiac placemat at some damn fool Golden-This-Happy-That place and wondered what in the name of creation was taking so long. 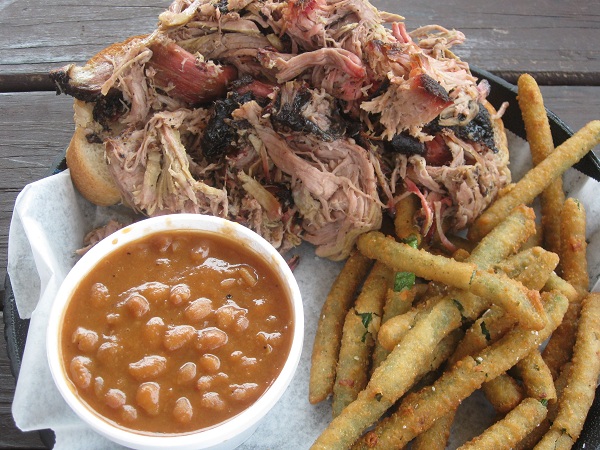 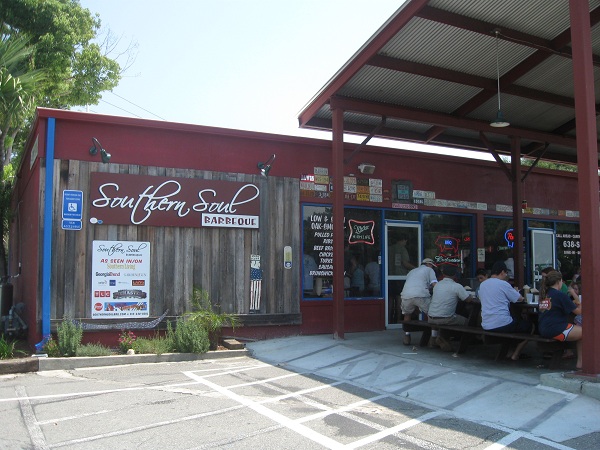 After navigating that terrible traffic circle and fighting for a place to park, guests should be ready to sit outside. There’s not a lot of interior seating. This place is very loud and very hot and very wonderful. We had to wait a little bit at the counter, and I think that just about the only strike I “realistically” have against Southern Soul is that they have a very dense menu and everything looks incredibly good. We had such a hard time trying to balance the staples of a barbecue lunch with all the additional things that Southern Soul is said to do well.

Marie went with pulled pork and they served her up a simply massive pile of it, with tasty fried green beans. The pork was tender, moist, sweet and smoky. This is really good stuff and genuinely deserves its reputation. I went with burnt ends and hand-cut fries and while I have only had this dish a few times, these were the best I’ve had, even better than the wonderful ones at Woodstock’s Bub-Ba-Q.

The sauces – we tried four – were all quite good, though the meat really didn’t need a one of them. The restaurant has them bottled for purchase, and I think that I enjoyed best a few drops of the mustard sauce on Marie’s pork. It also made a super dip for the fries. We should have taken some of this along for use on inferior barbecue elsewhere.

At any rate, it was far too hot to stay, and far too busy to converse with any of the staff, but I’m optimistic that we can get back again sometime and try a few other things under less mad, sweltering and rushed conditions. We’ll be back on Saint Simons in a couple of months, and maybe now that Marie knows just how excellent this place is, we can brave that stupid traffic circle and give ’em some more business.