I first visited Armstrong’s in early November, 2001. The Reverend Howard Finster had died shortly before, and so I took my children to pay our respects at his Paradise Gardens in Summerville, a town in northwest Georgia. While there, I remember blowing a tire, necessitating a trip to a nearby shop, and also having a really inexpensive meal at Armstrong’s. According to notes that I made at the time for my old Geocities page, theirs was among the cheapest barbecue plates of any restaurant in Georgia. A princely $3.99, then, would get you sliced pork with two sides. Today, that plate costs only $6.25, which is still among the lowest prices I can imagine for this much food.

In August, Armstrong’s was the first stop on what I termed our “Bama BBQ Tour,” about which I’ll be reporting through the next three chapters. I had been considering this trip for months, but added Armstrong’s to our list of places to visit when I was reminded of it in June. Then, I had done a little research about gone but not forgotten barbecue joints, and was glad to read that Armstrong’s was still with us.

The restaurant opened in 1965 and is still run by the family. The original owner’s grandson is in charge today, still serving the community and keeping quiet on the secret of the sauce. That would cause a little consternation at our table. 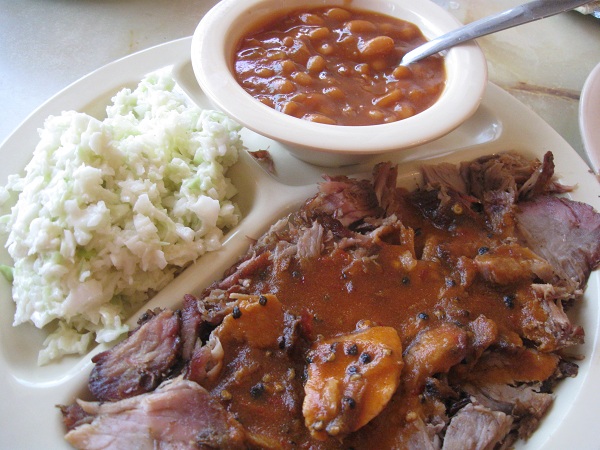 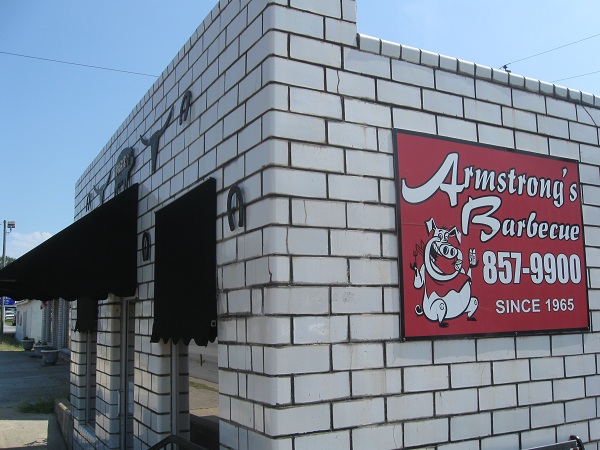 I asked my mother to join us on this trip, thinking that she would enjoy some time with her newest grandchild and that she could tell us a little bit about the communities around Lookout Mountain where we were visiting. She had been back to her stomping grounds of Fort Payne just a few weeks previously – she joined a cousin to sell in that World’s Longest Garage Sale thing – but she hadn’t been to Fort Payne via the Summerville road in a really long time. Mom was a bit amused by this whole business of visiting four restaurants in a day, even with the disclaimer that we eat light, share portions and, if possible, attempt to get some exercise between meals.

Unfortunately, my daughter decided to take offense at some already-forgotten slight and was a real joy while the rest of us were learning about Armstrong’s and looking forward to some good food. Our server has been there for 33 years, long enough to remember when the staff wore those sort of pillbox white “restaurant” hats. When Armstrong’s retired those and allowed its staff to wear baseball caps with the business’s logo, it was a big enough story to make the local paper.

The pork here is sliced and comes out already sauced. Disconcertingly, I forgot to ask for it dry – and I have been doing so well! – but I got a few tastes of the meat without it. It’s nicely smoked, but not particularly moist. I think it’s very good, and the sauce goes very well with it. This stuff is quite a mystery to me. It’s obvious that there’s some tomatoes and pepper in this light brown mix, and possibly onions, but the only thing that I could get the woman working the register to confirm was that there wasn’t much vinegar in it. The closest comparison that I can make is with Dreamland‘s sauce, but it’s not quite the same. Marie and I each liked it a lot, but my mother didn’t at all, finding it far too spicy.

In what would emerge as a hallmark of this strange trip, full of contradictions and unusual meals, my daughter and Marie disagreed sharply on the Brunswick stew. I thought it was quite nice and oniony, with lots of stringy meat and a thick consistency. More Virginia Brunswick than Georgia Brunswick, if you will. My daughter pronounced it the worst stew that she’d ever had. Marie really liked it and later said it was the best thing that she ate, the whole day. My mom said it was pretty good, but she prefers the stew at Smyrna’s Old South. The only real consensus was that Armstrong’s was a fun little curiosity and while it wasn’t superb, I am certainly glad that we came by for a visit.