When Marie and I go out to eat, we like to think of ourselves as being pretty unobtrusive. Forgettable, even. We don’t want to draw any attention to ourselves, particularly when we start photographing food. I sort of like to think that, should a restaurant’s owner or staff Google their way to our writeup down the line, they won’t necessarily connect the chapter that we have written to the faces that were in their store some time previously. Our trip to Amos’s, however, well, that was kind of unforgettable. We have no doubt that, should anybody on the staff of Amos’s ever read this entry, then one or two of them will nod and say, “Oh, yes. I remember them. They had that baby. And that accident.”

We first noticed Amos’s on a Sunday seven months ago, before the baby was around to cause trouble. I took Marie out for a Sunday Valentine’s Day date that included a drive through Cherokee and Forsyth Counties up GA-372. We noticed Amos’s then, grumbled that it was closed on Sunday, and made our way to the Poole’s Mill Covered Bridge Park.

It has been on my to-do list ever since, of course. You just don’t drive past a barbecue joint without telling yourself you’ll try and get back sometime. Well, a few Saturdays ago, we had planned to go to Columbus and Phenix City to visit friends, but that was a very, very, very trying week – we had daycare problems of the sort I wouldn’t wish on anybody and that stress left us exhausted enough to catch mild colds – and we knew we were just going to want to sleep in on Saturday and not mess with a road trip. We put it off a week, and I’ll tell you about it in a few days. So we slept in and woke refreshed and had a late breakfast over at Stilesboro Biscuits. By the time noon rolled around, we were thinking lazily about lunch. I was all for getting at least a little ways out of town. The last three plates of barbecue I’d had were all overpriced and I just wanted to see something other than suburban sprawl getting there. That’s why we drove up to northern Cherokee to find Amos’s.

I rang Melissa, who lives not far away from the place, and invited her to join us. She was not free. This turned out to be for the best. She missed a fantastic little meal – oh, this place really, really is good – but as we drove away, laughing off the embarrassment, I reflected how if she had been able to come, we could have followed her back around these crazy mountain roads to her place, wherever it is, and maybe Marie could have taken a shower. 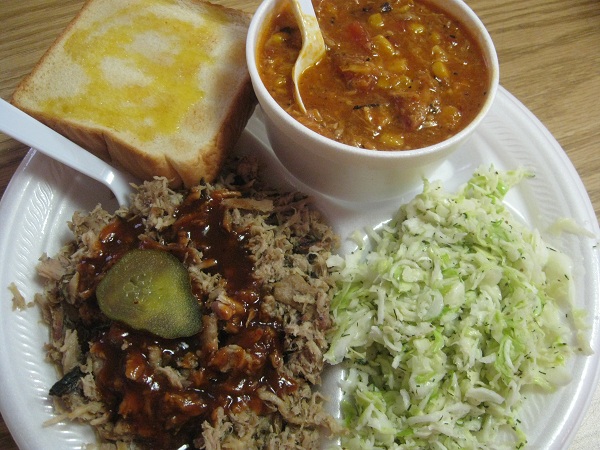 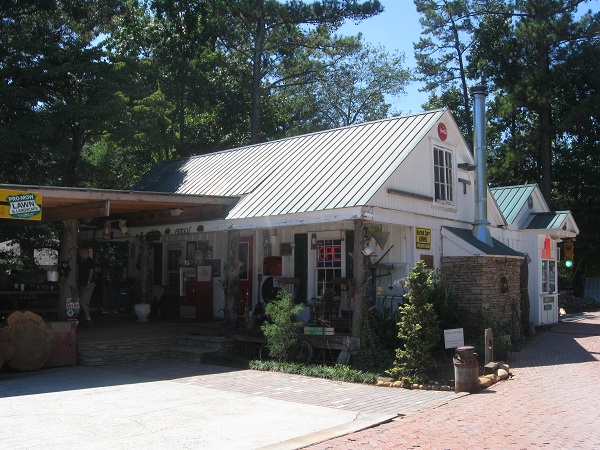 Amos’s is actually in a really neat old two-story house that had been located in the Dunwoody area back when that was all woods in the late 1800s. The building was relocated to the mountain foothills about forty years ago, and has been used as a restaurant for the last several years. It’s actually a little easy to miss. The sign is not quite as visible as the gigantic wall of logs. It looks less like the fuel for their smoker and more like a spectacular perimeter fence. The property is gorgeously landscaped and features a really attractive brick and gravel lot. There’s a huge front porch, shaded on one side by trees. Three or four degrees cooler and we would have sat outside.

The food here is simply excellent. After several underwhelming and stupidly expensive Atlanta takes on barbecue over the last couple of weeks, it was so nice to get out in the country and taste some chopped pork that feels, smells and tastes just right. The fries are hand-cut, the Brunswick stew was tangy, soupy and had just the right kick of spice, and the slaw was a nice, green, vinegar-based recipe. Everything was totally delicious. They have two sauces, a traditional brown ketchup-based sauce that goes just perfectly with the meat, and an orange habanero sauce that doesn’t quite nail it, but clears sinuses all the same. My daughter begged off to visit with friends at the mall. Kid missed out, big time. This was an excellent meal, the best I’d had in some time, and considerably better than the last three barbecue places in the city that I visited. Even the best of those three – Community Q, which I liked – was not a patch on this.

Marie had finished about half of her sandwich when the baby, sitting on her lap, had an accident. Not just a small one. This is my third baby; I have seen something like this only once before, and I have told myself ever since that I must surely have been exaggerating. This is going to be held over this kid’s head on every date he ever brings home to meet us. Sometime in the 2030s, I will, indeed, be telling my future daughter-in-law about how epic the failure of this diaper was, leaving Marie in a mad, fruitless dash for the restroom.

Parents of younguns should always, always have emergency changes of clothes for themselves in the trunks of their cars. We hadn’t quite got around to that yet. Oh, the baby’s diaper bag had about four outfits for him, just nothing for a mother on the receiving end of that kind of eruption to wear. Marie, peeking her head out, asked whether Amos’s happened to sell T-shirts. They do not, but a kind server went upstairs, where the restaurant keeps some storage, and retrieved an emergency cleaning shirt for Marie to wear. There came a point where I couldn’t help, and resumed my meal. Marie had to take half her sandwich home, having understandably lost a little interest in eating, but she added a few dollars to the tip jar on the counter for the shirt, and finished stripping off in the car.

Returning home, we didn’t get to stop by that barbecue trailer parked outside a knicknack and antique store about four miles back along GA-20 on the way back to I-575. Marie, half-naked and giggling, told me not to dare stop. Well, I was also going to swing by that Best Buy in Canton and get a new iPod adapter for the car. “Home,” she ordered. Now, of course, we’ve got a barbecue trailer on the side of 20 that we need to try some other day. You just don’t drive past a barbecue joint without telling yourself you’ll try and get back sometime.