When Marie and I visited Athens a couple of weeks ago, we had more on our mind – honestly! – than just driving around eating. In fact, we really just enjoyed our barbecue lunch, and, several hours later, a nice supper, although we did have a few snacks between them, and enjoyed some driving and visiting. After going to Hot Thomas, we popped just up the road to the Elder Covered Bridge. Unlike Watson Mill, which is about twenty-five or so miles away, this bridge doesn’t have a park built around it, and neither of us were dressed to tackle the steep grade down to the creek below it, but we enjoyed looking at the flowers and taking photos, and getting out of the way of other people driving through it.

Going back to Athens, we took a little detour to visit one of Marie’s friends, who lives outside Watkinsville, and her two gigantic hounds. As part of our decluttering, Marie has disposed of three crates of back issues of Scientific American. I suppose that I should be doubly happy that, apart from marrying a super-intelligent soul who enjoys such things, she has friends who enjoy reading this stuff enough to take it off our hands. The killer animals failed to maul me much, and we drove on into Athens and had a milkshake snack at Clocked, on Washington Street. 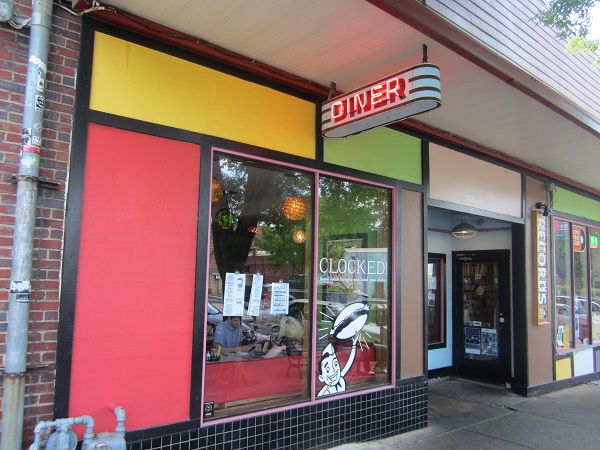 Marie, who wrote a chapter about this place late last year, figured that I would want to come visit because she saw something on the menu that she knew I’d like to try: a Cheerwine-flavored milkshake. I’ve often spoken longingly of the Budwine milkshakes that you used to be able to get from an area Dairy Queen, and reproduced the taste in the story linked to here. It does my heart proud to see that you can again get this in Athens, even if, for some dumb reason, I neglected to shoot the lovely desserts when they brought them to our table. Yeah, the unphotogenic fries and Marie’s grilled cheese sandwich, those I shot, but the gorgeous Cheerwine and blackberry milkshakes, brightly colored in tall glasses, you good readers will just have to imagine.

I like Clocked, which has a small interior but one lovingly decorated with fantastic movie posters from other countries of such drive-in classics as Inframan and Godzilla vs. Megalon, with subtitled Ultraman episodes playing on the TV above the bar. If I designed a restaurant, it would probably look a little like this. I’ll definitely have to come back sometime and try one of their burgers on a day.

After this snack, we stopped by the record shop next door, Low Yo-Yo, and I bought an old Byrds album. Readers of my Hipster Dad’s Bookshelf blog know that I’ve been going through a hippie music phase. I make no apologies, and I wish this particular live album had “You Ain’t Going Nowhere” on it. From there, we went to Jackson Street Books, and then to Bizarro Wuxtry and had a good chat with our old friend Robert, and then we bumped into Devlin and Mandy and Diego, a fellow I had not seen in years, and then we popped by the downtown Taco Stand to indulge my craving for one taco. I wasn’t even thinking in terms of photographing and writing it up for the blog – between the Alpharetta location and two of the others in Athens, this small, beloved chain has inches enough already, and there’s a search box somewhere on the bottom of the page on the right – I was just indulging the craving.

I did take the opportunity to snap a picture of King of Pops’ little cart on Clayton and College. Marie first told me, a year ago, that she had seen that the cart at the Marietta Square Farmers Market sold Arnold Palmer popsicles, prompting me to pay attention to these guys and look over their menu whenever and wherever I saw them, hoping to find this neat treat. A half-dozen or more stops by their cart in Marietta or in Poncey-Highlands didn’t net me any Arnold Palmer, although I did enjoy that sea salt caramel. Finally I find the darn things in Athens. Had to come eighty miles for one. And wait for the Masters to start back up, I suppose. That, too. 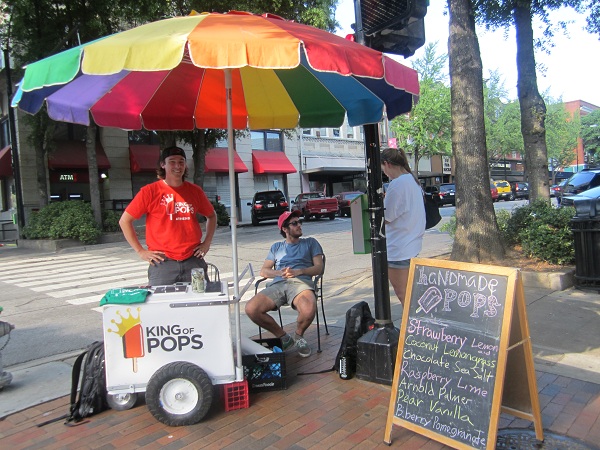 It was pretty good, although the novelty was, perhaps, more exciting than the reality.

So a little while after that, Marie and I did a little more shopping and had supper, about which see the next chapter, and then started for home to pick up the baby. Before we got too far out of town, though, we stopped by the Sonic on the other side of the mall. The Sonic closest to us, by the Big Chicken, has closed, depriving Marie of one of her guilty pleasures, the grape-flavored Slush. I don’t see that this little craving of Marie’s has been noted here before, so, for the record, she excuses it by saying that if I can make an exception in my diet for Del Taco (formerly Krystal), then she can have grape Slushes. She certainly can; she deserves all the grape Slushes in the world.

But not, perhaps, their “Route-44” size. A morning of barbecue, an afternoon of snacks and a nice supper meant that we couldn’t finish 44 ounces of slush between us!