On the Sunday of our too-short visit to Memphis, the four of us started the morning at that city’s children’s museum, about which more in a later chapter, and then we dropped Marie and the baby off with her sister. My daughter and I then took off for Arkansas and a lot of barbecue. We soon turned around, because the first stop on our planned tour was, weirdly, closed, despite my phoning the day before to confirm they’d be open. Still, we crossed the Mississippi on the fantastic I-40 bridge and returned via the slightly less awesome I-55 bridge, which is how everybody should go to Arkansas and back.

Longtime readers have read before of trips that we’ve taken where we start the day with the best meal at the best place, and the rest of the day pales in comparison. This was one of those days. Don’t get me wrong: the least of the meals that we had was memorable. I’ve now had barbecue at six places in Memphis, and the town is six-for-six. But the really amazing thing was that Leonard’s was even better than the mighty Bar-B-Q Shop, which I visited with Marie’s brother and sister last June, and which I thought could not be beat. Man alive.

Longtime readers have also seen me apologize for the poor photography in our blog a time or ten. This example is particularly egregious; unfortunately, we were seated in a room with bright pink neon track lighting, and even if I did find some camera skill or other somewhere, I doubt anybody’s equipment could make food look appetizing under these conditions. 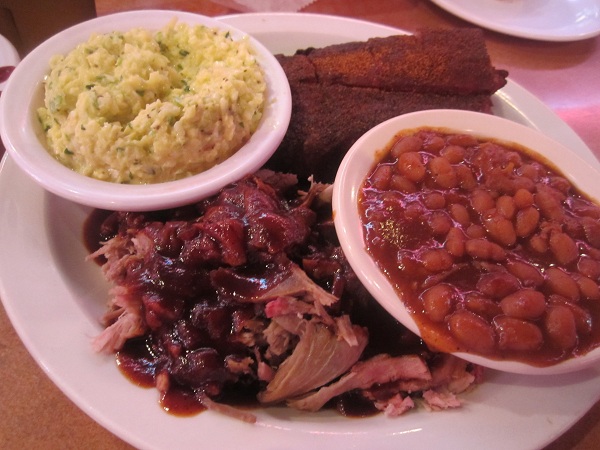 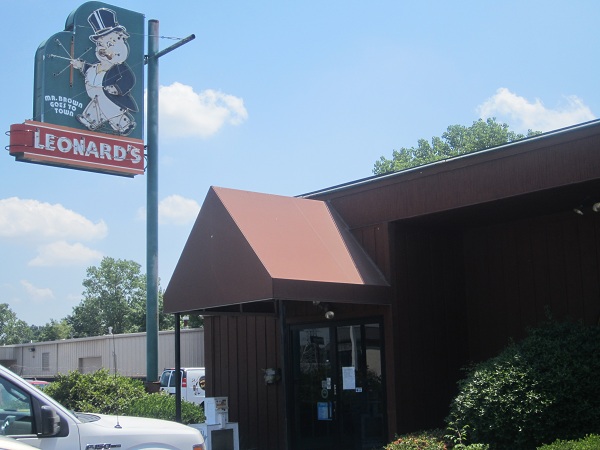 This is one of the oldest businesses we have visited. According to the official history, Leonard Heuberger started the restaurant as a little five-stool lunch counter in 1922. It moved, ten years later, to a store on South Bellevue. Fifty-five years later, this second store on Fox Plaza Drive, near Mt. Moriah just south of the perimeter, opened. The original store closed four years later, and, in 1993, after thirty years of employment at Leonard’s, Dan Brown bought the restaurant. He still owns it and is still wowing his guests.

Honestly, any store this old can make some bold claims about being the first to do something, and not many people can object. Leonard’s boasts that the tradition of serving slaw on a chopped pork sandwich is theirs’. Since I ordered the combination “BBQ & Ribs” plate, I didn’t get the authentic effect of their sandwich, but I faked it with a bite of pork and slaw in a dinner roll. I still prefer the tastes to be separate, especially when the tastes are as unique and powerful as these.

I can find little to add beyond these facts: I have not enjoyed anybody’s chopped pork so much in months. I liked it almost as much as I did Brick Pit in Mobile. They make mustard slaw here, which is my favorite variety, and I really liked it. But it’s with the ribs that we sing goodnight Vienna. These are the best ribs that I have ever enjoyed, anywhere. I urge guests to order them dry and see what I’m talking about, for no sauce is in any way necessary. They are a good bit drier, and less messy, than any ribs that I have had before. The meat is tender, underneath a tough and peppery bark that is covered with a seasoning rub that’s principally made of brown sugar. Oh, this was heavenly stuff. Cooked over hickory and over charcoal, they are perfect.

One important note that’s apparently worth making: looking around, I see comments that the lunch buffet here is not so good. Well, no kidding. It’s a buffet. Those aren’t good. I’m telling you: order the Ribs & BBQ combo. It costs the same as the buffet, it’s more food than you can eat anyway – I passed my beans, which were wonderful, over to my daughter to enjoy with her BBQ spaghetti – and it is completely delicious.

My daughter and I enjoyed some good food after this, but we’d have done as well to just go back to the hotel and call it a day. Between Gus’s the night before and Leonard’s, this trip more than met my expectations.