If our previous chapters about Atlanta’s food trucks have suggested that I’m still a little confused by them, that’s reasonable. As much as I wish to like the idea of them, something about the way they’re wrangled and rodeoed in Atlanta has left me stumped. It doesn’t help that not a month goes by without some bizarre bit of weird press, usually related to the city of Atlanta or one of the properties upon which the trucks park finding some new reason to inconvenience the trucks’ owners with some new permit or requirement.

The other problem is my own: if I’m going to drive to a place to get food, then I’d like for there to be a reason to visit that place beyond it is possible that the food that I wish to eat might be available. So while the city of Atlanta and one or two places that host trucks find a new way, every five weeks or so, to make the frustration level higher than the enjoyment of actually eating the good food available, the city of Smyrna told the trucks to come on outside the perimeter, and, every Tuesday night, this suburb hosts a great big and family-friendly event at Taylor-Brawner Park. Here’s your reason to visit: hundreds of families of all sizes and ages are having a blast, picnicking, kicking back and running around. In its first couple of months, the Tuesday evening event has become a great focal point for the community to get everybody together, with mobs of people getting out and enjoying the sunshine and a little exercise, with some really good food. In other words, wake up, Atlanta. While you’ve been issuing citations and regulating the fun out of everybody, one of your suburbs has just kicked your butt.

Marie and I had the opportunity to swing by a couple of Tuesdays ago. My mother, who lives in Smyrna, was watching the baby and showing him off to friends that evening, so we allowed her some extra grandparenting time and went by to see what was up with the festival. We parked at the church next door and enjoyed a nice walk to where the trucks were lined up. The park is a really nice one. It’s designed around what had been Brawner Hospital.

If you’ll indulge an even greater digression than usual, Brawner was an active psychiatric facility at precisely that time in a boy’s life – age eleven to thirteen – when those places – insane asylums – were simultaneously the coolest and most terrifying places in the world. And, when you were a middle school metal maniac like I was (maaaaaan), LPs like Quiet Riot’s Metal Health or whatever Iron Maiden released that year just beat it into your head. Screaming, straitjackets, long dark corridors, you name it. Brawner fascinated and repulsed me in equal measure, even once I was old enough to know better, leaving a decades-long shadow on my memory, and then the blasted place was shut down and left locked up for years, increasing its freakiness quotient beyond measure. There’s an abandoned mental hospital in my home town. They make terrible TV programs about people spending the night in those. Then the city repaired and refurbished the old building, turned it into a quite amazing space for hosting events, and built a beautiful park around it. Probably not any old ghosts of serial killers dragging chains through the corridors late at night when you really think about it, actually. 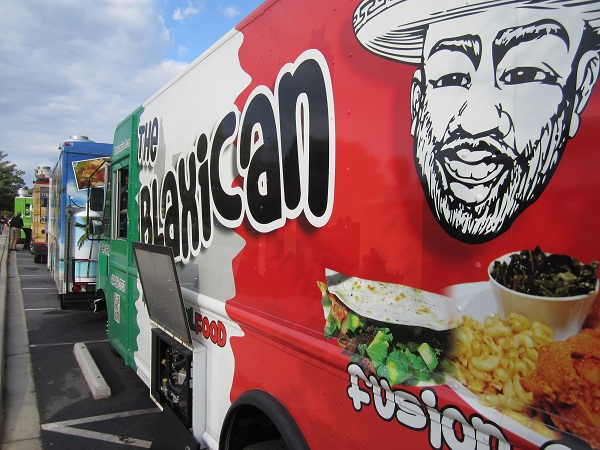 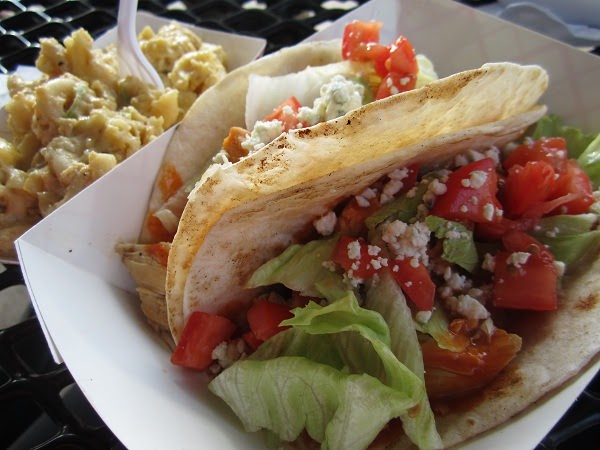 Anyway, so any given Tuesday, there are a dozen or so trucks lined up to feed the mobs who’ve come to enjoy the fresh air and rampaging elementary school kids. One of these is the Blaxican, which I had been hoping for some time to stumble across. It certainly did not disappoint! Will Turner, a Boston native who’s lived in Atlanta for twenty years, was laid off from his job at a religious non-profit and decided to follow his dream and come up with some awesome home cooking. The theme is Mexican soul food, and the unusual name – I confess my eyebrows raised – apparently derives from Los Angeles, and is used there to describe the interracial children of Mexicans and African-Americans.

Turner has come up with some downright stunning recipes. The special was buffalo chicken tacos, which were completely amazing, but I was most blown away by the jalapeno mac and cheese. Now, just a few weeks ago, I had some nice things to say about Bone Lick BBQ, but was somewhat baffled by their take on jalapeno mac and cheese, which was not bad, but it certainly lacked the pizzazz that Turner puts into his. Rather than two random slices of pepper, this is all mixed up together into a gooey and spicy mess. All of the flavors really lingered and they were very welcome to do so. This was, by any definition, an awesome meal. 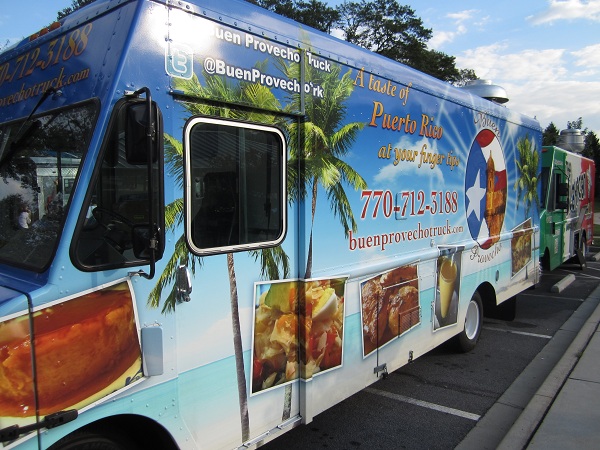 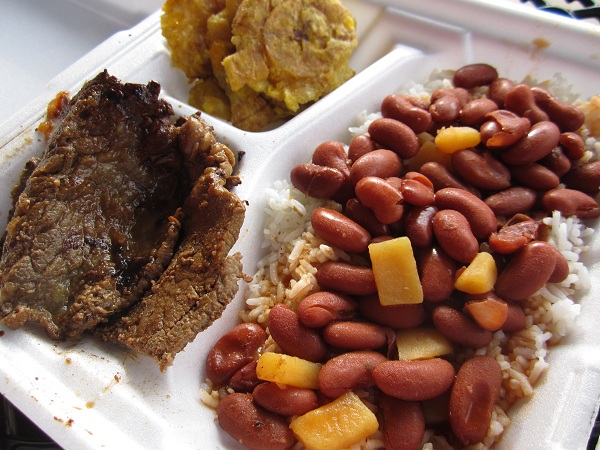 Marie, meanwhile, enjoyed some red beans and rice with pineapple beef and plantains from the good people at Buen Provecho, which serves up Puerto Rican-styled dishes. The beef was just a little tougher than what a guest with a plastic knife would like to spend time carving, but it was also tasty and satisfying. We thought about second courses or additional indulgences, but decided in the end to be pleased with what we’d had and move on. Ibiza Bites, W.O.W., the Mobile Marlay and other popular trucks are out here regularly, and we might come back again to try them out. Our toddler is still a bit too small to join the bigger kids in rampaging around unsupervised, much as he’d like to believe otherwise, so coming here with him might be a bit of a challenge, but maybe before too much longer. 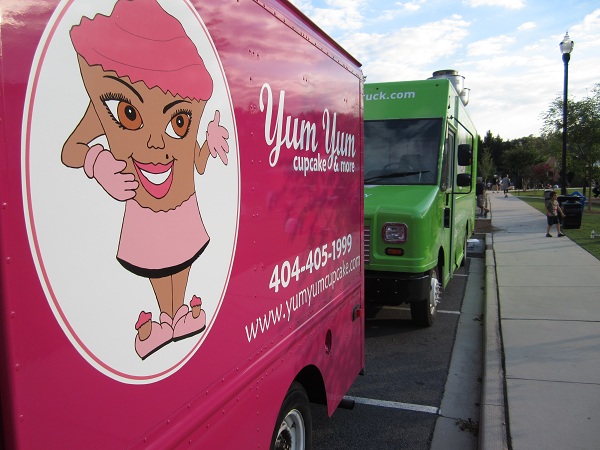 We did make one stop at the Yum Yum Cupcakes truck for a Willow, which is a delicious vanilla cake with raspberry filling and a drizzle, before moving on, as people were looking for seats. It’s best to come with folding chairs or a blanket, as benches and tables are at a premium, and parking is certainly an issue, even with the neighboring church kindly lending out its large lot. Nevertheless, it is definitely worth coming out and enjoying a nice evening outdoors. Especially if you work in some licensing bureau downtown or for the Atlantic Station events department, and you’re wondering how in the dickens you let one of the suburbs totally punk you.