Anybody looking to our blog for coverage of beer is bound to be disappointed. Barbecue we’re pretty good about, and Buford Highway we’re getting better with, but since only one of us drinks, and only occasionally at that, we are scattershot journalists at best. But this visit to Kickbacks wasn’t about getting better coverage for our blog, it was because I wanted to marvel at their selection and try something new for myself. I crossed my fingers that I might leave with a new favorite, hoping that Kickbacks’ reputation might show off something new and neat.

For lunch, I intended to simply have beer. We followed Chris over to this restaurant’s neighborhood, which really amused us, as we drive the same make and model of car, only in different colors. We blew it at the end, though, as Chris uses GPS and we used Google Maps and said, “Naw, it’s this way,” and had a silly ol’ ten minute detour. So, with beer in my mind, Marie ordered a burger and enjoyed it very much, and Chris was pleased with his fried green beans, and I looked over their chalkboards of available drafts and their telephone directory full of bottles – presently 680 strong – and said to myself that I’d never heard of a cherry stout before. That sounded interesting. Bell’s Brewery is based in Kalamazoo, Michigan and Kickbacks has quite a few of their beers. So I had a Bell’s Cherry Stout and indeed left with a new favorite. 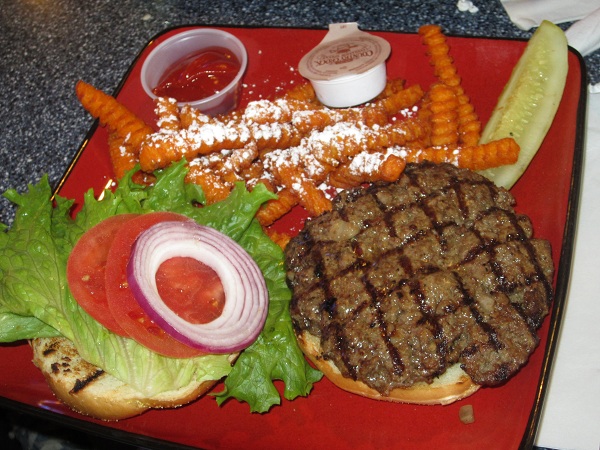 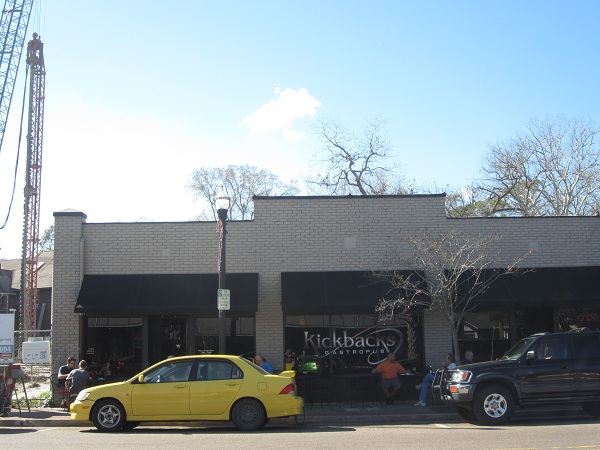 Interestingly, I seem to have lucked out to have found this at all. A few hours later, once we had returned to Saint Simons, I texted my brother to ask about this stuff, as a craving slowly rose. This just hit every note for me; it was deep, rich, flavorful and unmistakably cherry. I wanted bottles and bottles of it, pronto. My brother works for the best package store in the Atlanta area, has a remarkable understanding of small, craft breweries and unusual labels, and knows everything about beer. If he were to write a beer blog, then it would be, hands down, the best beer blog on the internet. Period. I asked him whether they carry it, knowing that, with his store’s reputation, surely the answer would be yes.

He texted back instantly. The answer was no.

Apparently, Bell’s had difficulty sourcing the cherries that they needed this season, owing to a poor harvest, and if any bottled cherry stout had made its way to the Atlanta area in the last four months, it was news to him. I rushed to Bell’s web site and used their brand finder feature. He wasn’t joking. Cherry Stout’s not available in Atlanta. Of course, their brand finder doesn’t show it in Jacksonville, either, leading my brother to consider whether Kickbacks might be finishing off the last of the previous season’s batch.

I am so disappointed! As regular readers know, I prefer a nice glass of iced tea to any beverage, even more than some of the wonderful small-label sodas that I really enjoy, but this was just so good! And no sooner do I discover it than it vanishes right from underneath me? Heck, I wouldn’t have followed that with a pint of Terrapin’s Milk Stout had I known this would happen. I think the world of Terrapin, and their Milk Stout is just fine, but heck, I can get that anywhere. Anywhere decent, that is.

Seriously, readers, if you are within a hundred miles of Jacksonville, give Kickbacks a call and see whether they’ve still got some of this ambrosia – I mean, cherry stout – in the keg and gas up your tank and go. Kickbacks is open for 21 hours every day, shuttering only in the middle of the night to clean and restock. Parking is an aggravation, but there are a million things to look at inside, and the food is good, too. Marie was very pleased with her burger. For the rest of us, for pity’s sake, cross your fingers and pray for those good cherry farmers up in Michigan to have the most bountiful harvest ever next time. Bell’s has just got to get bottles of this stuff down to Georgia next winter.

Other blog posts about Kickbacks: