Consider this entry a prologue of sorts to something that I hope to come back to sometime in the summer. I have protested many times before that the occasionally great state of Georgia just has not had the attention paid to its barbecue that it deserves. In April, I took a drive out to Carrollton with Matt and Kelley to see a bookstore that turned out to be really quite wonderful. The road took us directly past one barbecue joint that I featured here some time back – Briar Patch – and, had we gone from the Marietta Square instead of my house, it would have been two, as we would have passed the excellent Dave Poe’s.

The road – well, technically two roads, GA-120 and then GA-61 – also took us past an amazing seven other places that I’d never heard of before. I looked them up when I got home and saw that the first of these, Merle’s, was covered once by Andy at Burgers, Barbecue, and Everything Else. The other six – Happy Hawg, Evans, J & V, Jones, J Bo’s, and Sam’s Memphis Blues House – are all just waiting to be visited and documented by an appreciative blogger with a camera.

Our road ended on the south side of Carrollton, the home of the University of West Georgia and a place where The Rocky Horror Show is still freaking out local government, and a really good barbecue joint called Billy Bob’s. Bob Green and his son Bill opened this place in what appears to be a former Kentucky Fried Chicken building in 1997. It was a wet and rainy lunchtime – we arrived at noon – and the place was packed with happy eaters. 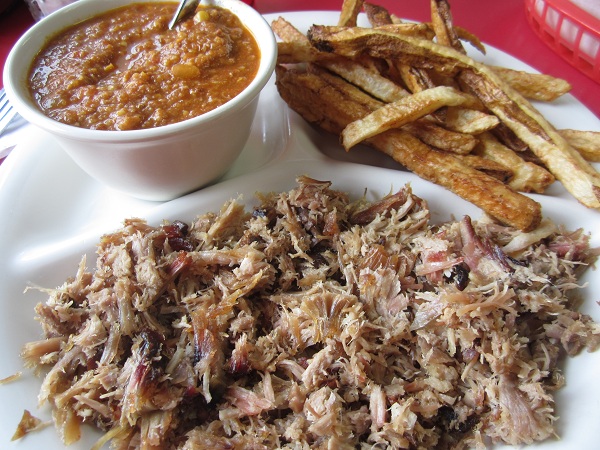 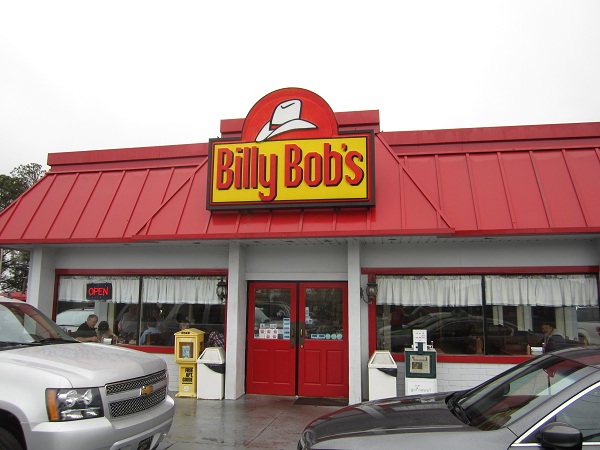 Bob Green holds court here from a chair by the fast food counter, which is where patrons line up after eating to pay. He’s an older fellow and kind of reminds me of my dad. He told us that he’s owned restaurants before and worked in country clubs and golf courses, but barbecue is where he’s happiest. He smokes overnight over hickory, and the chopped pork is dark and smoky. It is usually served wet, pre-drenched with either a tomato-based or thick vinegar-and-tomato-based sauce. I note that it is thick because it is not quite like the western Georgia Hudson’s-style sauce that I have referenced before and will do again in the next chapter, although most of the restaurant’s other presentation is similar. By that I mean the hand-cut fries, the thick Brunswick stew and the inclusion of the incredibly hot mustard sauce on the table.

Each of the restaurants that I have visited to use Hudson’s-style sauce have also had this mustard and cayenne blend on the table, as does Kennesaw’s Barbecue Street. There are plenty of different mustard sauces around the south, from the gold yellows in South Carolina to the honey orange in Columbus and Opelika. But this is the seventh place that we’ve found in this west-to-north arc around Atlanta that has this unmistakable and very mean stuff on the table and I have not seen or tasted anything like it anywhere else. You’ll know it when you see it. It is dark yellow freckled with red and will bring that “fine line between pleasure and pain” that the late Christina Amphlett of the Divinyls told us about crashing down on your poor and helpless tongue. It also makes a terrific fry sauce and I brought some home with me. Bob told us that they have a long-term hope to one day bottle this sauce and sell it in grocery stores, but the cost estimates they’ve made to acquire shelf space are a little high for them at this time.

We thanked the Greens for our meal and went back downtown to visit Underground Books, an excellent shop that didn’t have anything that I needed on this visit, and got dessert back up the road at a little place called Vogelsberg’s Bakery. We saw the original store in Carrollton, which no doubt caters to the college kids there. They opened a second location in Villa Rica north of I-20, closed it, and reopened it some months later at this new location. The woman there said that she thinks it is still a Villa Rica address, but it’s really halfway between the two towns. The isolated and quite rural Villa Rica is considered part of Urbanspoon Atlanta, like the similarly distant Taylorsville and Euharlee to the north. This still baffles me. 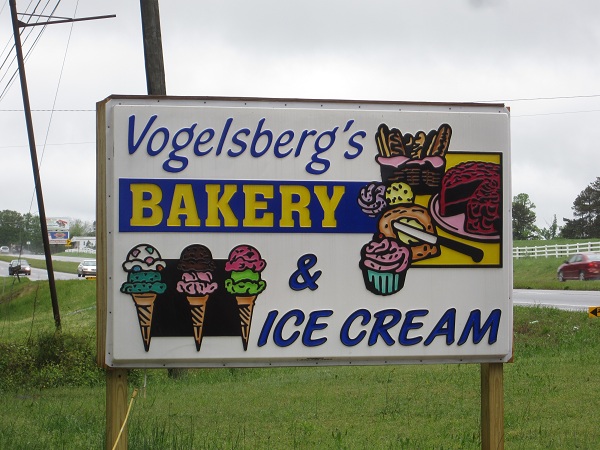 Apart from a few coolers of ice cream, they make danishes, fried pies, pastries, and eclairs and things here, from a storefront that, when we visited, had been serving up for a month but looked like it was still six months away from being open to the public. It was quite charming in its ridiculous way to see all the flotsam and clutter in the back. The baked goods were pretty tasty. They could stand to order in some little sample spoons from their supplier, though. Some Blue Bell flavors are a little unusual, and guests aren’t wrong for wishing to try a bite before going in for a scoop. We’ll draw a polite veil over the customer service portion of the experience and say that the eclairs are not bad.