In May of last year (as mentioned in passing in this story), Marie and I went to see Katie Herzig at a terrific venue called Terminal West, and enjoyed a couple of bottles of Fentiman’s soda before and during the show. We did not really pay attention to where we obtained the drinks. It turns out that the space adjacent to Terminal West is a small restaurant called Stationside. It’s open for lunch, and also for dinner during shows.

With executive chef Dan Brown in charge of the “very small” kitchen, they opened in 2013 and have been doing pretty good lunch business for the companies in the area, but it’s simply not a place that people are talking about, so their PR company reached out to some local media to come try their sandwiches and appetizers and, a couple of weeks ago, I joined a large and diverse group to sample their food. And a couple more bottles of Fentiman’s. I love their ginger beer! 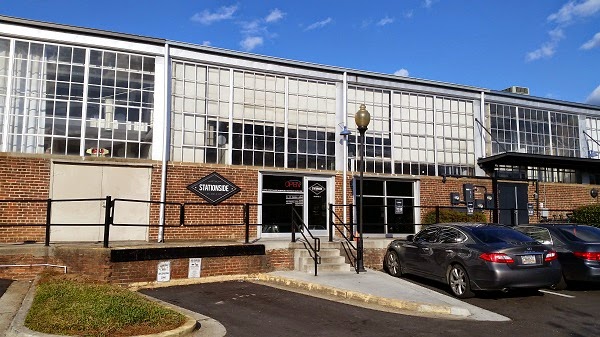 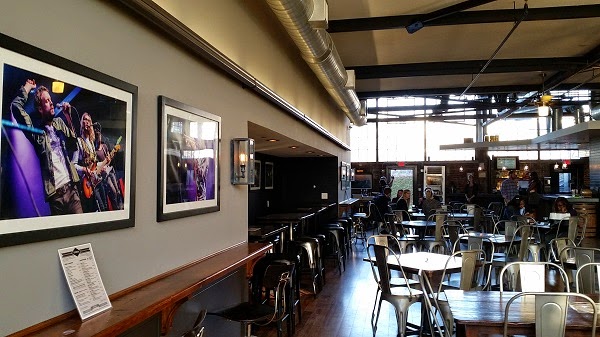 Chef Brown, who previously worked locally in the kitchens at 5 Seasons Brewing in Alpharetta and at The Porter Beer Bar in Little Five Points, told us that they were looking for bar food, but something a little different from the standard chicken tenders and “frozen onion rings,” he said with a slight shudder. I think that he has done a really nice job. The menu is really eclectic, with several vegetarian and vegan offerings, and, for the gluten-free among you, they can make almost everything to fit your needs.

There are three salads on the menu and we tried two of them. There was no consensus favorite at my table, which I shared with my fellow bloggers Friday Date Night, Eating With Erica, and Belly of the Feast. I think that I enjoyed the kale salad, with avocado, candied ginger, spiced pecans, and dried cranberries, a little more, but the Compressed Granny Smith apple salad also had some strong support. It had very thinly sliced apples, Cabot cheddar cheese, and pistachios. 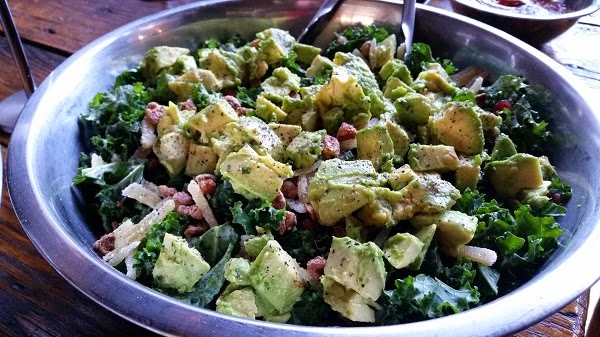 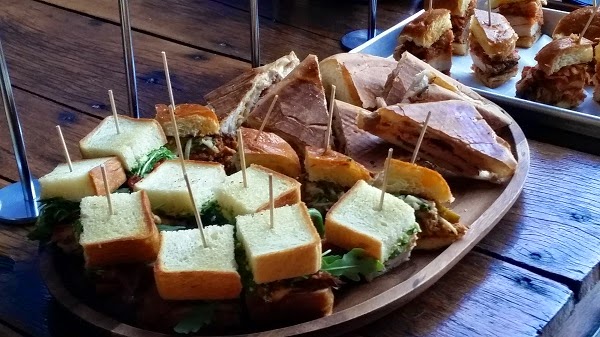 Taking the place of those unwelcome onion rings, Stationside offers some quite neat snacks, including some pretty amazing tempura-battered avocado slices, served with a sweet chili sauce. These were a huge hit, and several people wondered aloud how tricky it must have been to perfect the recipe. I don’t know that I’ve ever seen deep-fried avocado before, actually.

We also enjoyed samples of five of the sandwiches. I confess that I was not really wild about the Chickpea Burger, which I found to be too dry, and would not order again, but other people seemed to like it. On the other hand, both the Turkey Sandy and the BBQ Pork, served with jalapenos and fennel-apple slaw, were quite good and I liked both of those. I really, really enjoyed their Cuban, called La Cubana, which is a very pleasant surprise and easily as good as what you can get at Havana on Buford Highway. Best of all is the Korean Fried Chicken, which reminded me of the awesome Odd Job at the dearly-missed restaurant Villains. Actually, with its fun variety of sandwiches, commitment to locally-sourced ingredients wherever possible, and upbeat staff, this whole place sort of reminds me of Villains in a nice way.

Stationside is a very good lunch choice for people in the area, and also for anybody coming to see a show at Terminal West. Since we live in the ‘burbs with kids and have to rise before the dawn, we almost never get to go see live music anymore – we missed Juliana Hatfield there just a couple of weeks ago – but I absolutely love the venue, especially since it’s smoke-free! Next time, though, next time somebody we want to see is playing there, that Korean Fried Chicken is on the agenda, and a bottle or twelve of Fentiman’s Ginger Beer.