This old Georgia-based chain is continuing to shrink, but we found that the location closest to us has actually expanded its Saturday hours. That’s a good sign, isn’t it?

A few months ago, I turned my nose up at another bit of bad restaurant news from Atlanta. That city’s last remaining S & S Cafeteria, on Campbellton Road, shut down. Once upon a time, the chain had grown to 22 locations in three states. They’re down to just six now.

The original S & S opened in Columbus GA in 1936. At one time, there were as many as four in that city, but there hasn’t been one in Muscogee County in decades. I count three in Georgia (two in Macon and one in Augusta), two in South Carolina (Greenville and Charleston), and this one outpost in Knoxville. I’d been intending to stop by for ages, but hearing about Atlanta’s last S & S closing made me more determined to go.

So this weekend, we took a day trip to Knoxville, about ninety minutes up the road from us. We started with a terrific lunch at one of our favorite places, the legendary Pizza Palace. We did some shopping at Book Eddy, Comics Exchange, and McKay, and enjoyed some rain-soaked time at Ijams Nature Center. Around 5:15, we stopped by the S & S for an early supper. 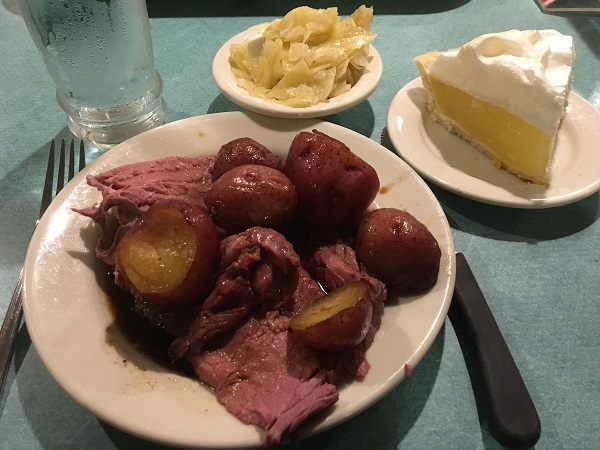 I love how the building is so vast. You enter into a small lobby, with the line door to your left, and from there you walk for just about forever. I can imagine this turns into a long wait during peak times. Eventually there’s a menu board and some trays and it’s off to the races. Most meat-and-two meals are $7.99, with kids’ meals an amazingly low $1.19. And of course there are plenty of a la carte selections, like the desserts and the 39-cent devilled eggs.

We were really happy with the food and the service. Our son even said that the dinner here was his favorite part of the trip, but he’d retract that a bit later in the evening. Marie got roast beef carved for her in the line and some cabbage, and I had lemon pepper chicken with a squash medley and some pretty good mac and cheese. Our kid didn’t feel like being more daring than chicken tenders and mashed potatoes with a great big goblet of blue gelatin for dessert, but he loved it completely.

The crowd at the S & S naturally skews older, which isn’t surprising. The dearly-missed S & S in Tucker GA, which inspired the Magnolia Room, had a mostly AARP-age clientele when we visited. That’s also the case in Knoxville, though there were some families with young kids taking advantage of that killer kids’ meal price. It looked to us like the students at the University of Tennessee don’t know about this place, but then again, classes are probably out for the winter break. I’d like to think that the kids there are being taught to go get plates and plates of good food for a great price.

But while our son’s favorite part of the day was, for a time, his experience here, it got overshadowed a little later. I’d been missing hockey, so I picked a day that the Knoxville Ice Bears would be in town. They were hosting the Quad City Storm before a nearly sellout crowd. We had terrible seats. Well, I say that, but the Knoxville Civic Auditorium is kind of small, and it wouldn’t be fair to call them “nosebleeds.”

Our son just doesn’t much care for sports, and sadly the hockey bored him out of his skull. But the reason the game was so packed and good seats impossible to buy was because this was one of the nights of the wiener dog race. They lined up about two dozen dogs and their handlers alongside one goal and two dozen family members alongside the other and let ’em go, to much confusion, distraction, and, yes, piddling on the blue line.

He really, really didn’t want to stay for the second period. And why should he? All all the dachshunds were done.