Here is a restaurant that has been on our to-do list for a couple of years now. Kelly and Lisa Teal opened Bigun’s Barbeque in a great location on GA-515 between Jasper and Ellijay in 2008. We had actually planned to stop when we were last in the mountains last November, but I got a hankering for Poole’s in Ellijay and that became our second barbecue restaurant of that day instead.

This time, we made our way to Ball Ground to visit with my former boss Melissa, who urban-evacuated herself to the mountains in ’09. It seems that most of the time that I visit, I make my way over to the reliable Two Brothers, but on this trip, we wanted something new. We visited for about half an hour. Melissa owns a little shop in Ball Ground called Backyard Market where Marie bought some fresh eggs, and the toddler gifted a learn-to-walk dinosaur to Melissa’s baby, who won’t be ready for it for a few more months, but our baby has outgrown it. And then we drove up through Jasper for a really good lunch. 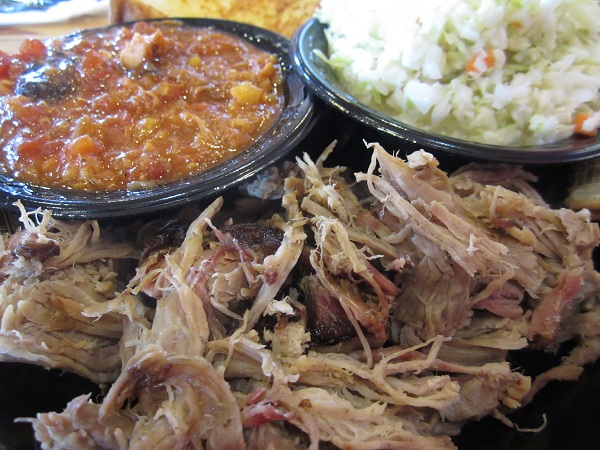 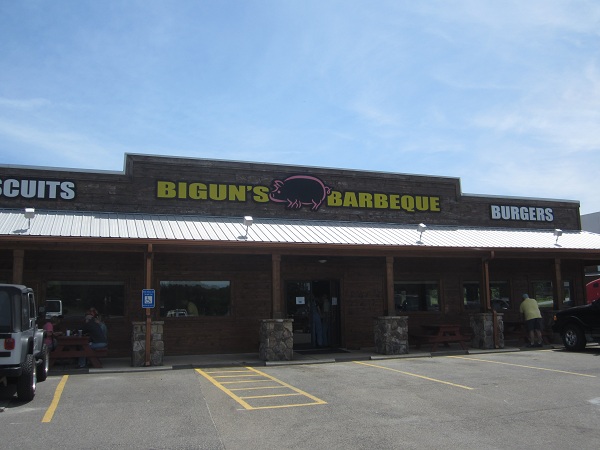 We’ve all seen restaurants that share a building with a gas station, right? Well, despite outward appearances, Bigun’s is not quite like those. This is a large restaurant and convenience store with some gas pumps out front, creating a charming feeling of an old general store. Apparently there had been one in this space, but it burned down around a decade ago. About a third of the retail space is given over to Bigun’s own products, including T-shirts and ball caps, and all five of their sauces. I’m not certain who the company is who actually produces their sauces, but the labels are incredibly, suspiciously similar to the labels that you see on other regional products like Merrililly Gardens and Panorama Orchards. You know the ones, light tan, same font, “packaged exclusively for,” wink wink? Those guys.

Anyway, they make five for Bigun’s and they are all very good. There’s the expected sweet sauce, two markedly different degrees of hot, a “Talking Rock Tangy” ketchup and vinegar mix, and a South Carolina-style mustard base. The sweet and the milder of the hot sauces are on every table; the others are available from pumps next to the Pepsi machine.

We all had pulled pork, which was very good, and a wide variety of sides that were, by consensus, even better. The Brunswick stew, packed full of really flavorful meat and seasoned perfectly, was the standout, but the baked beans, lima beans, slaw, and corn on the cob were also all really good. The baby made a mess out of some mashed potatoes and white gravy. Other sides – and yes, they put so much work into them that they do as much of a trade in veggie plates as they do pork, ribs, chicken or turkey – include broccoli slaw, collard greens, and black-eyed peas. Marie enjoyed everything so much that it’s likely that any future trip up I-575 / GA-515 to visit and document barbecue in Ellijay, Blue Ridge, and Blairsville will most likely include a stop here for her to get more veggies first.

The girlchild and the baby entered into a food coma as I turned the car back toward home. We made one stop along the way for dessert, bringing home some treats from the Woodstock location of Smallcakes. 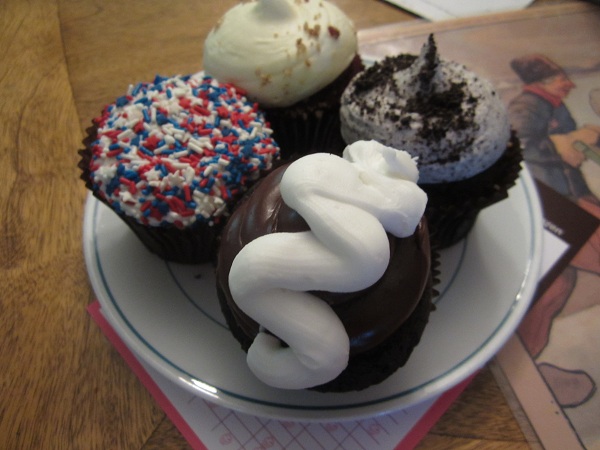 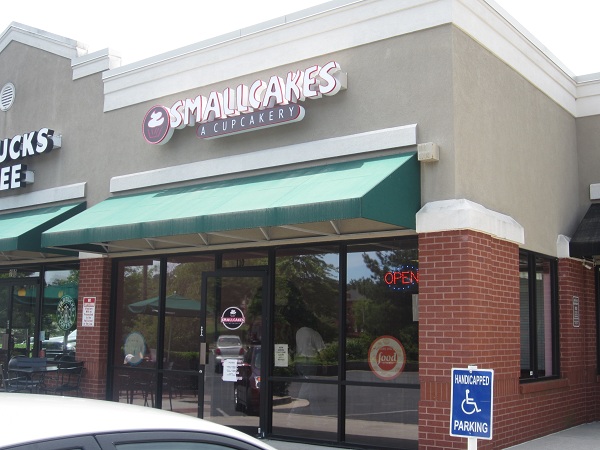 Once we got home and the kids woke, everybody enjoyed their cupcakes. I was surprised that they did not have the little two-bite versions that we’ve enjoyed previously at this store, but rather the conventional $3 ones like you see at Gigi’s or Camicakes. Very tasty, not too much icing, and a splendid little snack before I indulged in an epic nap of my own.