After our lunch in Mississippi, we returned to Memphis, picked up our daughter, took her shopping, and then went to Marie’s sister’s house to spend the afternoon with her. They played Carcasonne – I’m open to most any game, but this one’s appeal has long eluded me – and, several hours later, the convention finished, their brother Karl joined us for some Munchkin, and then we convoyed out east along Poplar Avenue for ages and ages, to the suburb of Germantown.

The building that’s home to the Commissary dates back several decades, most of which was spent as a general store, but since Walker Tyler purchased it in 1981, it’s been one of Memphis’s most celebrated barbecue joints. I think you might could argue that this place, Corky’s, and Charlie Vergo’s Rendezvous, which we’ve not yet visited, are probably equal favorites as far as the public’s idea of who has the best ribs in the city. Having tried these, I’ll agree that they are excellent. I like Leonard’s a little more, but they’re not doing a darn thing wrong here. This is tremendously good barbecue. 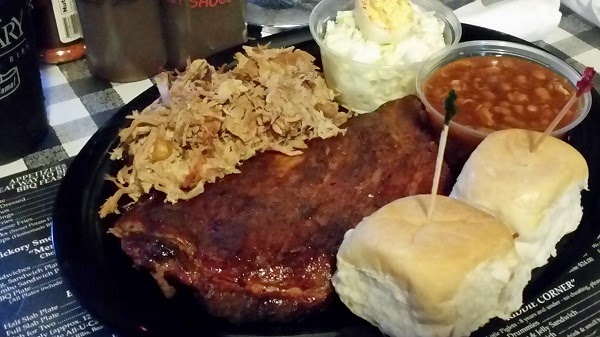 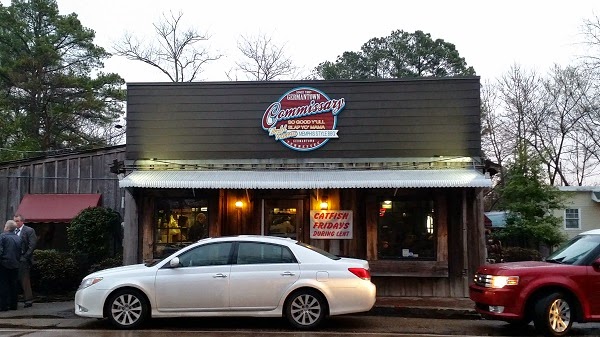 Marie and I shared a combo plate with ribs and chopped pork. We ordered a kids’ meal for the three year-old, knowing that the girlchild would eat most of it, with her slice of pie. Marie’s brother and sister split the Boss Hog Special, which is four meats: chopped pork, ribs, sausage, and chicken. Should the road ever take us back this way, I’m having the ribs and sausage, because it’s completely wonderful. The chopped pork was kind of average, but I liked the sausage best, and then the ribs.

Oddly, though, looking around, the restaurant is best known for two things that we didn’t sample: the barbecue nachos, and the tamales. No, we had the mayo-based slaw – which, honestly, nobody liked – and good baked beans, and a single deviled egg. That’s a cute little addition to the plates; additional deviled eggs are available for forty cents apiece.

We arrived rather late in the day for this place – disagreeably, they close at 7 on Sundays, and the six of us came in right behind a party of ten – and quickly added to the cramped lobby. It was raining a little and all the folk who arrived around 6 pm crowded in to stay dry. This made all the people trying to make it to the register awfully impatient. Well, despite the small lobby, the service was excellent and speedy, and while our opinions of the food ranged from unimpressed all the way to extremely pleased, overall it was a fine little meal.

I actually ate only about a third of our combo plate, though, because a very special burger was waiting for us at our next stop. More on that next time.

Other blog posts about Germantown Commissary: