I figured, incorrectly as it turned out, that stopping by a sandwich shop would make a nice midday snack for Marie and our daughter. I had looked around and learned that Orlando is the home of two small chains of such shops. I flipped a coin and Sobik’s, which is very popular, came up tails. I picked Gabriel’s instead. The original store was opened in 1958 by Paul Gabriel, who passed away in 2013. That business, today in its second location on Edgewater Avenue, is still in family hands. At the chain’s peak in the 1970s, there were almost twenty stores around Florida and Georgia.

We didn’t go by the Edgewater store because it was more convenient for our schedule to stop by the one on Curry Ford Road. This is a franchise run by Martin Williams, an artist from Liverpool. His store, which moved down from one shopping center to the adjacent one in August, is decorated with Williams’ portraits of pop stars and actors, many of them from England. I was really taken with his Beatles portraits on one wall – referenced from the photos that came with the “white album” and given a colorful and Cubist sheen – but curious about a big two page spread from the Liverpool Echo earlier this year in which three great big Cunard cruise ships came into the Mersey docks for a big celebration. 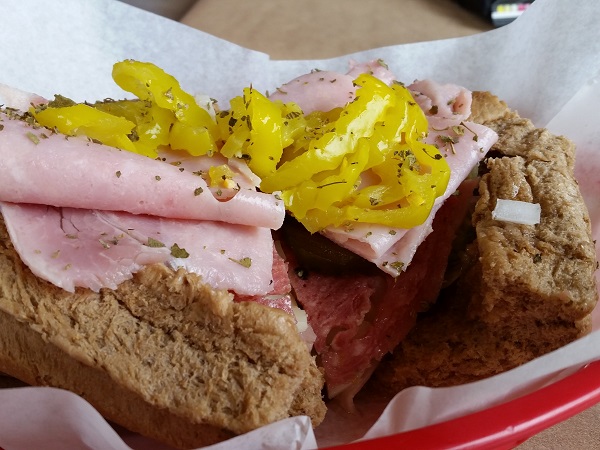 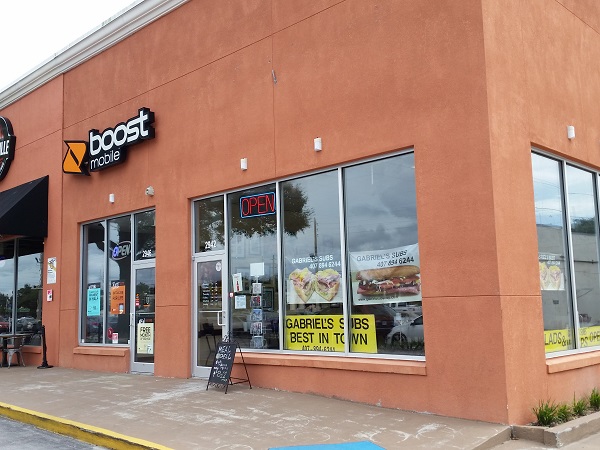 After the three of us shared a single Italian sub – Marie and the girlchild weren’t peckish for their own snacks, as it turned out – I had to ask Williams about the newspaper. It was a huge event from late May in which the Queen Elizabeth, the Queen Victoria and the Queen Mary 2 visited Liverpool for the 175th anniversary of the cruise line, including a synchronized flyover by the RAF Red Arrows. More than a million people turned out to greet the ships. He pointed to a nebulous spot in the photo to show me where he was in the giant crowd. His father had been an engineer on one of the ships. So were lots of people’s dads in Liverpool, i expect; Cunard has been based in Southhampton for the last thirty years, but Liverpool remains the line’s spiritual home.

The sandwich itself was pretty good. I can name many that are better, but certainly not any from any large chains. The bread’s really soft, and they use high quality ingredients. It’s probably not demanding that anybody drive across town to try it, but this would be a perfectly fine lunch for anybody in the area. Normally, we’d want to recommend the original location, but Mr. Williams was such a fine host with such entertaining stories that I’m very glad that we stopped by his store.

But speaking of the Beatles, anybody shopping for music in Orlando is in for a treat. I was very pleased with Park Avenue CDs, a very good shop on Corrine Drive near the airport. They have live events periodically and a great selection of vinyl, CDs, and a fabulous library of music biographies. My vinyl-loving daughter bought the new record by 21 Pilots, and I got a CD by a group called Frightened Rabbit that I’ve been listening to a lot. But while Park Avenue puts about 90% of the record stores I’ve ever visited to shame, it is totally left in the dirt by the astonishing Rock and Roll Heaven on North Orange. Holy anna, what a shop. This is the kind of deep, deep, deep collectibles store that brings old hippies in RVs in with their spiral notebooks full of details about which RCA 45s were pressed in a Nashville plant and which in Los Angeles, because they’re looking for both. The prices can get pretty high, but fairly reflect the scarcity of some of the inventory.

Unfortunately, we did not stay in Rock and Roll Heaven for long, because the place reeks of incense. Marie could handle it for about ninety seconds, and I had to step outside after about eight minutes, but they were eight pretty eye-popping minutes. One day, I’ll go back with a gas mask and a couple of thousand dollars and rebuild my record collection.