For the second stop on our trip, I wanted to visit the last remaining location of C.F. Penn Hamburgers, a very old chain that started selling slugburgers in the 1920s and grew to three or more locations in north central Alabama. A couple of my blogging buddies had visited the old storefront in Decatur, not, I must clarify, with glowingly positive reviews, but vintage places like this just should not be missed.

C.F. Penn opened the original hamburger stand in 1927 in the town of Hartselle, and the Decatur store followed in 1936. A third store, in Cullman, opened thirty years later. These three were all still in business as late as 1988, but only the one in Decatur is still open today. It is not in its original location, however. In 1971, a fire damaged the original building on the corner, and they moved to this site with as much of the signage and fixtures as could be taken. News articles on the walls of this restaurant only name these three stores, although this 2005 story from The Decatur Daily claims that there were two others in the chain, in Birmingham and in Moulton.

The restaurant remained in family hands until 2009, when Franklin Penn, Charles’s grandson, was ready to retire. He sold the restaurant to William Vandiver, who has apparently not changed much of anything about the place. It’s still a delightful, frozen-in-time greasy spoon, with the slugburgers deep-fried and given a dressing of mustard and onions. They’re wrapped in one sheet of wax paper and given to guests atop a second – it saves on buying napkins from a distributor, I suppose – with a shaker of red pepper nearby. Wash one down with a Pepsi, or try to eat ten in an hour and get your name on the wall. 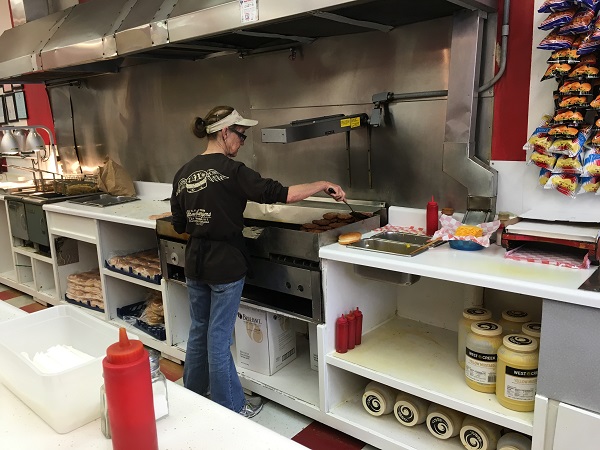 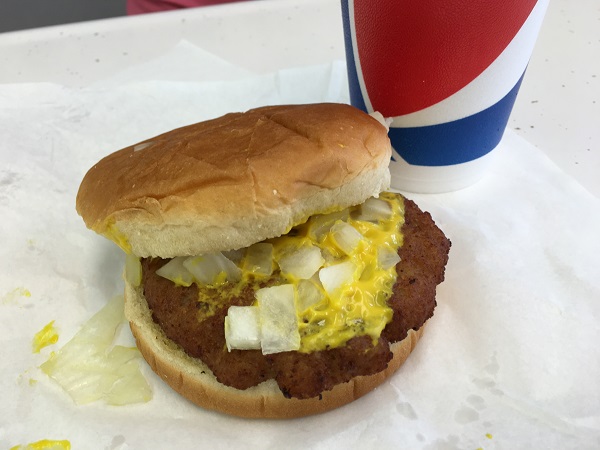 One bites into a slugburger with lowered expectations, but darned if C.F. Penn’s didn’t give me one of the most pleasant surprises I’ve ever had on the road. This thing was really good! I wouldn’t mind having another one of these some day down the line at all. I have never actually enjoyed a slugburger before; I just find them so curious and interesting that I’m keen to try them when I find them, but I liked this a good deal. Perhaps it just needed a generous shake of red pepper. 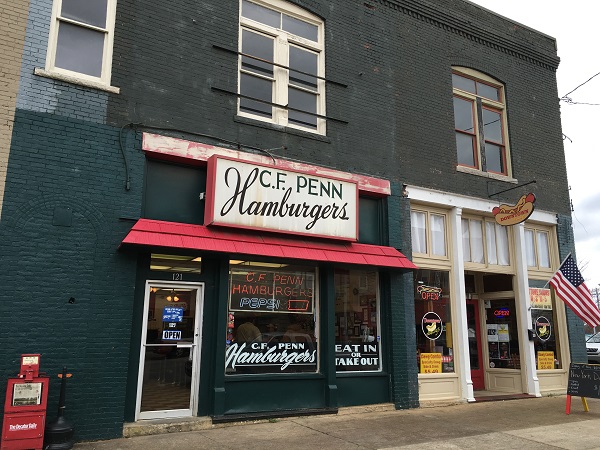 Marie passed on the experience – I kind of knew going into this that she was not going to be interested – but our son enjoyed some fries and a bag of Golden Flake chips. The restaurant was very busy during the lunch hour, although surprisingly quiet. There were perhaps ten other guests there at the same time as us, all eating alone, so our son’s yammering was the dominant sound in the place! Two or three other people came in to place large orders for their offices, but didn’t linger for conversation with the staff, who were incredibly pleasant and nice.

I love looking at old places like this. Even though it’s not truly vintage 1930s because of the fire, if you squint, you can fake it. I would have enjoyed visiting even if I had not liked the burger.