This area can boast at least two barbecue restaurants that date back to the 1940s. One of them, Couch’s, has been in the same place since 1946. The second-oldest in town, however, has moved around a lot, and only recently reopened after taking a few years off.

I had never heard of Sportsman’s BBQ before a small story in one of the local free weeklies, Chattanooga Now, in August. The review was very dismissive of the sides, but raved about the smoked pork to an interesting degree. It’s my experience that writers just don’t often do that about the barbecue around this city. Their stories are tempered by the reality that the best barbecue around here is a bit of a drive from around here, and yet the even-handed review suggested a thoughtful and intelligent critic who wasn’t just hyping stuff up with hot air. So I decided to go have lunch here one day in late August.

A couple of weekends later, I came back with Marie and our son because I wanted a second opinion to back me up. We agree; in a town with so many mediocre options, and where the best of them are, while good, pretty far under the Memphis (or Athens!) average, Sportsman’s is the best we’ve tried so far. This is really moist and smoky pork, incredibly flavorful, better than my previous area favorite, Shuford’s, by leagues.

Sportsman’s is apparently the second-oldest surviving barbecue restaurant in this region. Couch’s in Ooltewah is the oldest (1946), but this place first opened on Highway 58 three years later. Dee Sweeney opened it, using techniques and recipes that he learned somewhere in Alabama. The restaurant has moved around a lot, and expanded to a few satellite locations. In the 1970s, the principal business moved to Signal Mountain, where it stayed until its closure in 2007. During that time, Sweeney passed the restaurant down to his grandson David Johns and his wife Deborah. (Additional background here.) 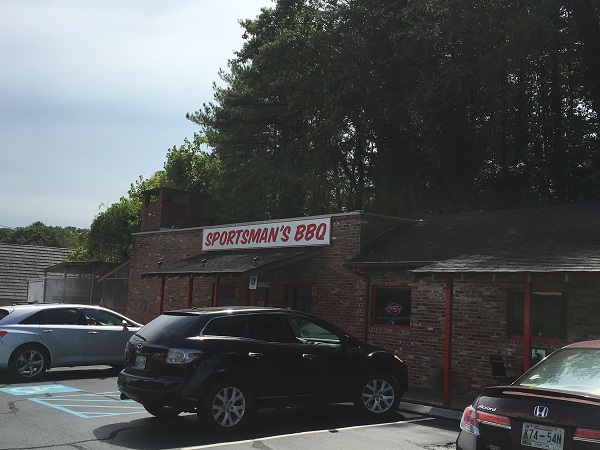 Sportsman’s reopened this summer after a nine-year break, taking over a building that has been home to at least two other barbecue restaurants previously: Henry’s Skinny Pig and Smokin’ Ed’s. I haven’t come at the same time as any big crowds, but I’ve overheard people telling their servers how impressed they are. I’m not mad about the slaw – it’s too dry for my taste – but the baked beans and the deviled eggs are really good.

I’m sold and I’m convinced. I have many, many more places to sample and a lot of hope that we’ll find new and different and better in barbecue around here, but Sportsman’s is by some measure my favorite in town so far. If I’m not feeling adventurous or curious, then I’ll be back here to continue working my way down their menu.

Are you planning a barbecue road trip? You can see all the barbecue restaurants that we have visited for our blog (more than 390 !) on this map, with links back to the original blog posts!