A few weeks ago, Marie and some coworkers visited a popular place on the south side and she found some really good mustard slaw to go with her meal.

My new workplace is particularly fond of food, and one of the office favorites is Clyde’s on Main. It’s a casual place with a bar, games, and often live music, but we only came for the food this time. I’d missed out on some previous excursions there and was glad I’d made it along for this one.

Clyde’s has two locations, Main Street in Chattanooga and Church Street in Nashville, and is owned by the Monen Family Restaurant Group that also owns Milk and Honey, Taco Mamacita, Community Pie, and other favorites of ours, and their professionalism shows. It opened in August of 2014 and they later opened the second branch in Nashville. A Washington, DC company also named Clyde’s objected to the name back in May and asked that the name be changed; not sure where that is going. Given that the place is named after a former auto repair shop in the same location named Clyde’s Auto Glass (love that signage on the bricks), you’d think they have a claim, but should they change their name to add those two words you’ll suspect why. 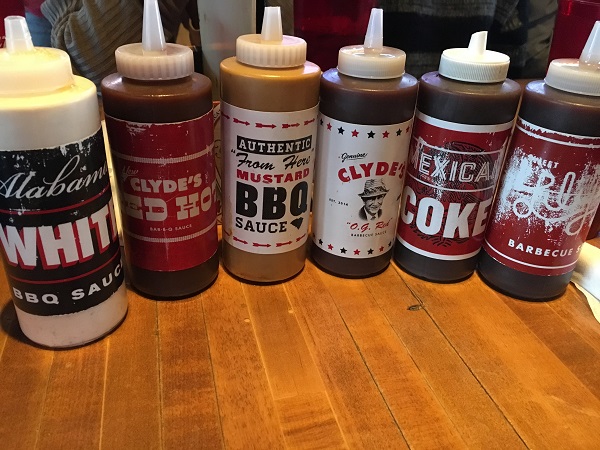 The interior is roomy and has a lot of seating. We got a couple of the high top tables and had a good time. The old glass doors from the auto service are still there and let in a lot of light. 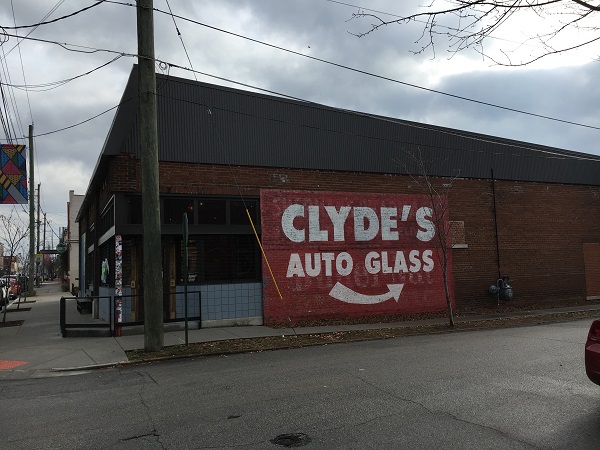 The menu is “New American” and the prices range from about $12-18 for entrees, more for steak, and a few bucks less for the sandwiches. I had the barbecue because Grant and I had recently had a discussion of the dearth of good BBQ in town, and I saw that they smoked over hickory so I had to check it out and report back to him so he could mosey on over there should he so desire. I thought it was better than most of the places in town. The dry rub is good, and the variety of sauces lets you experiment a bit. I wasn’t a huge fan of any of them by themselves, but the mustard and sweet red sauces mixed together worked pretty well for me. You get a choice of mustard or mayo slaw and I picked mustard.

Overall, it’s a pleasant place to sit and eat with friends or coworkers, in a place that’s efficiently run and serves food that is enjoyable. I certainly wouldn’t mind voting for Clyde’s again should it come up as an office suggestion!