Happy blogaversary to us! Today, Marie, Let’s Eat! turns seven years old, and I decided to celebrate by giving a little love to the barbecue in this part of the state, since my pleasure has been somewhat moderated in the last seven months of writing.

I have not been shy in stating that I’ve been disappointed in what I’ve found in eastern Tennessee, but I am also very optimistic and firmly believe that there’s better to be found. I’ll also say that I have not done as good a job in going out and digging deep and spending hours on the road searching like I did in Georgia, but to be honest with you good readers, cash has been a little tighter than we had expected moving here, and we have not been able to justify the indulgence quite yet.

Let me also clarify what I mean by disappointment. Better than three-quarters of the barbecue places we’ve visited (and I count 41 as of today, along with two in you-could-walk-there towns in northwest Georgia) have served up perfectly good plates of barbecue. That’s thirty-odd places where I wouldn’t object to another visit at all. What I have not found, with one exception, are bucket list-quality places that everybody who enjoys driving around and experiencing neat old restaurants with amazing meals need to plan to visit. I think there are a few out there. We’ll keep looking. And what disappoints me is the relative sameness of the chopped pork and sauce. Unlike Georgia, where techniques can change radically within a twenty mile radius, restaurants here are a little more predictable than I’d prefer.

Geography note: I’ve asked many Tennesseans where the line between east and middle lies. About half of them say it’s the time zone line, but I agree with the other half, which say that it is Monteagle. Not that it matters much now, as nothing west of Chattanooga makes this initial list, but who knows what we’ll find later this year? 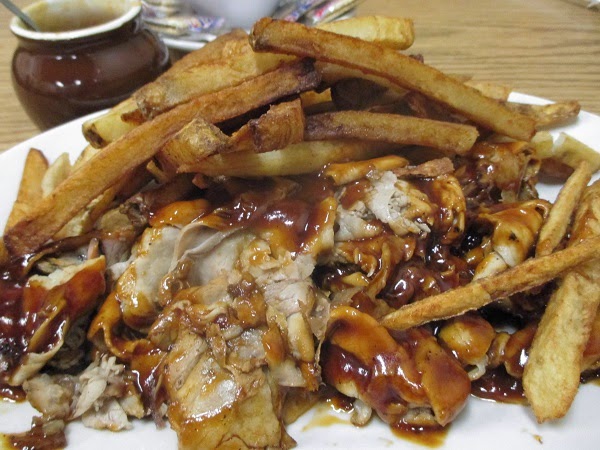 So this is the bucket list entry. Nobody, anywhere, prepares barbecue like Ridgewood. It may not be the best that I’ve ever had, but it’s very, very good and it’s completely unique. I hope that we’ll be back in the Tri-Cities area later this year; we really need to sample more restaurants. The only other barbecue place we’ve visited in that area, Dixie, has closed.

Much closer to our home, there’s this carry-out place that’s been around since the late sixties and serves the best ribs in town, by miles, along with a light brown sauce that’s more like what you’d find around Tuscaloosa AL than anywhere in Tennessee that we’ve yet been.

Spoiler alert! We haven’t served up a story about this place quite yet, but will soon. Incredibly tasty chopped pork and ribs at this old country store-type place and the very pleasant surprise of an eastern North Carolina vinegar sauce had my mouth very happy indeed.

Truly delicious chopped pork in a cute, lakeside setting. The Knoxville area demands much more exploration, but I’m tempted to just keep going back here… and I’m not all that good at resisting temptation, you know.

Couch’s gets the nod because their preparation style is genuinely unique, and anybody who loves barbecue should visit this place to see how they do it: shaved deli-thin and served with lettuce, tomato, and hot slaw. The result is more akin to a good ham sandwich than what you think of as barbecue, but if we’re championing places that do it their own way, this place has done exactly that, not conforming to expectations, for seventy years.

The pork is better than average for the area, and would get a thumbs-up for that alone, but the brisket is the real big gun here. If you want better brisket than this, you may have to go to Atlanta.

In 2016, Sportsman’s opened its doors in a new location, back in action after an eight-year break. It’s an offshoot of Sweeney’s, which dates back to 1949, and features some very smokey pork and ribs, with good sides.

A revisit for this place is long overdue. We really enjoyed the pulled pork here, as well as what might possibly be the best banana pudding in the world.

Two big caveats about this place: the barbecue can be greasier than I prefer, and I don’t like the sauce. However, it’s really tasty, full of a strong smoke flavor, and I love the service.

This small place that mainly does carry-out got a big new audience when Trip Advisor named it one of the country’s ten best four years ago. I wouldn’t go that far, but I’ve certainly never had a bad meal here.

Maybe I’ll do this again next year and maybe not… one thing’s for sure, though: I’m not going to settle for this being the top ten until I’ve tried another forty or fifty restaurants in this part of the world, so I need to get to work and visit more places! We plan to be back in Knoxville in a few days. I wonder what we will find…

4 thoughts on “Our Favorite East Tennessee Barbecue (So Far)”