Back around Christmas, we came home from a short trip via TN-58 and drove past three restaurants which I added to the to-do list. A few weeks later, I visited the furthest one for a pretty nice picnic meal.

Living in a smaller city means your perspective of time and distance begins to shift quickly. After living here for seven months, I’m already stopping to ask myself whether a thirty-five minute drive for lunch might be too indulgent. Thirty-five minutes? I used to spend longer than that stuck on the Canton Road entrance ramp trying to get to work. I told myself to quit being ridiculous and drove north. (More on this subject in a story next week.)

So time flew by and I was back in the crossroads of Georgetown, an unincorporated community at the far north edge of Hamilton County. The employees of Dave’s Spiced Right couldn’t quite agree how long the restaurant had been there – one told me “wow, forever,” but I’ll go with the more reasonable “two and a half years” – but they do a pretty good trade in carry-out orders. There are two picnic tables in front of the restaurant for people like me who bring a book to read while they eat. 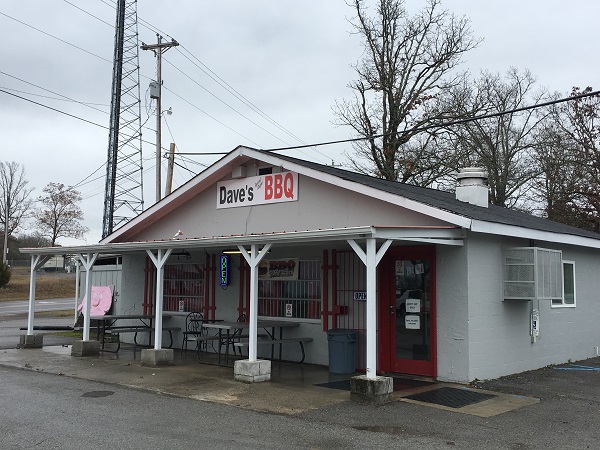 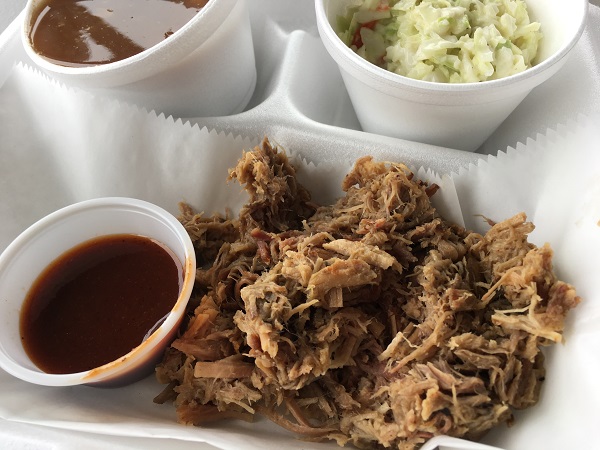 They smoke over hickory wood here, with an impressive stack behind the building. It results in some moist and mild pork, without a very strong smoke flavor. It wasn’t bad, but I’ve enjoyed better in the area. The slaw was much better than most, however. The sauce was the expected sticky-sweet brown for the region. Overall, I found the flavors of the food very similar to Sequatchie Valley BBQ way over in Dunlap.

I stepped back in to refill my tea and thank the very nice people for the meal and made my way back to town via 58 like I’d done earlier, again noting the next two places that I needed to come visit. Wonder when they’ll pop up in my “I’ll do this today” list…?

Well, whenever they do, they haven’t yet. But a couple of weeks later, I did drive north, rather than northeast, to the town of Soddy-Daisy and had some barbecue that was also quite similar to this. This restaurant is called BBQ Andy’s and it’s been open in a tiny space for almost six years. I was reminded of Dave’s by the smoke rising from the back of the building. 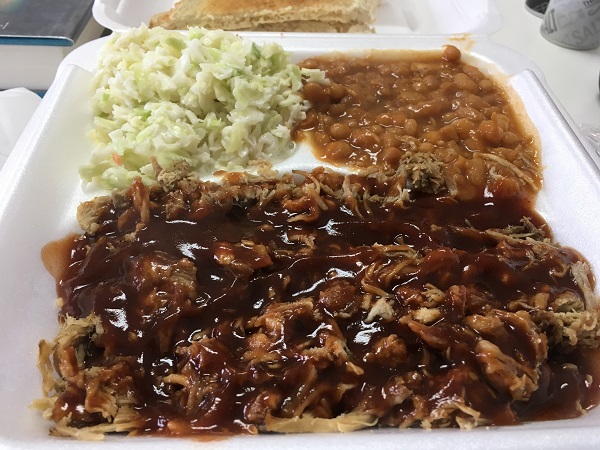 I do have the most obnoxious curse hanging over my head. Whenever I forget to ask for my meat dry, that’s when the restaurant uses a sauce that I don’t particularly care for. This was the only thing about BBQ Andy’s that I didn’t like; it had a chemical taste to it, and the meat underneath the goop was better without it. Otherwise, I quite enjoyed my lunch here. The price was lower than most restaurants in the area – seven bucks for a gigantic pile of food – and the meat was chopped to order. There are only two tables in their small place, and the other guests and the people coming in for carry-out orders all patiently waited as their lunches were prepared just right. Slaw and beans were perfectly fine.

This place isn’t open on Saturdays, because they’re typically too busy with catering orders for their very small operation to manage both those and their storefront. It’s a bit of a drive from the downtown area for lunch, but if you have the time or the desire to stretch your legs, it’s not a bad little trip.

One thought on “Barbecue in Georgetown and in Soddy-Daisy”