We had a delicious dinner of pork schnitzel earlier this month, which wasn’t quite what Marie had planned to make that evening…

I was in the mood for Chicken Parmesan and we’ve been moving away from red sauce, having overdosed a bit on it during our everyday meals. Although technically Schnitzel is German rather than Dutch, it’s not incredibly uncommon in the Netherlands and I thought I’d take a shot at it. And add a bit of the Dutch style of red cabbage while I’m at it.

One aside – I was very happy to find some instructions for Schnitzel that included a comment that the blog author shares our opinion of veal. If you don’t know why we don’t eat veal, please first make sure you haven’t eaten recently and then go check on how it’s raised. Finish reading this article first, though! Anyway, this turned out beautifully after only two tries. Note: before you start working on this yourself, please make sure you start everything else before you bread the meat.

I had originally intended to make mushroom gravy and have Jagerschnitzel, but found myself deciding that just didn’t work for me; the idea of chicken parmesan was too much on my mind, I suppose. The mushrooms will just have to be fried up with sausage later in the week instead, so they don’t go to waste. 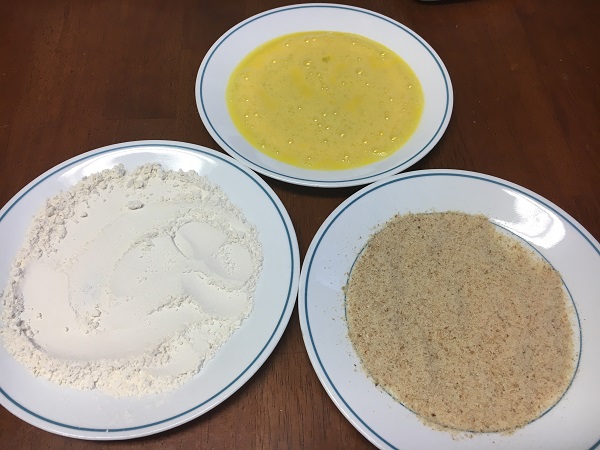 4 boneless pork chops
salt and freshly ground black pepper
½ cup all-purpose flour combined with 1 teaspoon salt
2 large eggs, lightly beaten
¾ cup plain breadcrumbs (Hah – you’ll need more than this. Yes, you waste some that has to be thrown away after the meat is dredged in it, but you also don’t want to have to sprinkle the crumbs painstakingly over every millimeter of surface, when bathing them in a pile is so much faster and easier.) 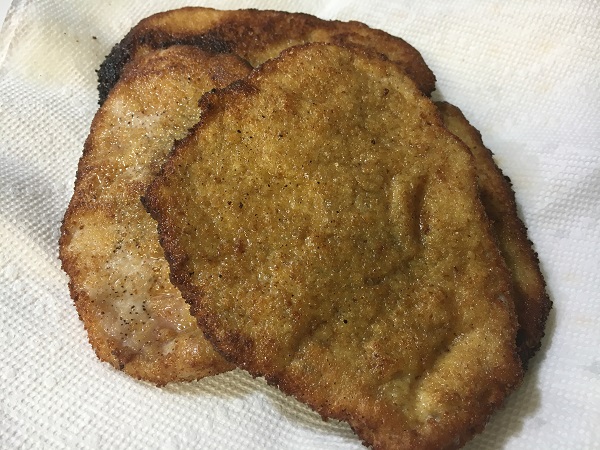 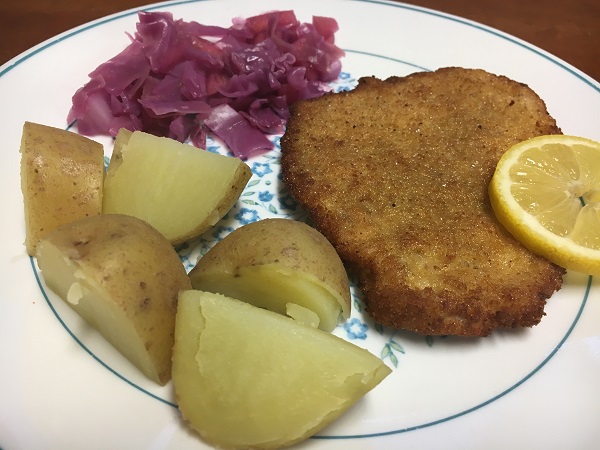 Instructions: prepare your sides first. In my case, I boiled some potatoes and made up some red cabbage with apple and vinegar; they took about 20 minutes. That gave me enough time to work on the meat.

Fire up the skillet late in the process – you want enough time for the oil to heat but not overheat. Put just enough oil in a skillet to barely cover the meat. Heat it to medium (about 330 if you have a candy thermometer; if not, make sure the oil is shimmering but not smoking, and dip a corner of the pork in to see if it starts frying immediately.) If the oil is too hot, the crust will burn before the meat cooks; if too cold, the crust doesn’t have a chance to get crisp. If you have a screen to catch the drops when oil spits use that, but don’t put a lid on while the meat is cooking. This is a hands-on fast process and you want to snatch them from the oil at the perfect moment.

First, pound the meat very thin with a meat mallet. You want it to be thin enough that it cooks through in the very short time it takes the crust to get brown and crisp. The easiest way is to put them between two sheets of plastic wrap. Sprinkle on a little pepper and salt.

Lay out three plates or shallow bowls with the flour, beaten egg, and breadcrumbs (in that order). Dip the pork in each, coating all sides. Don’t overdo it, just coat to cover. Fry immediately. Have tongs available for flipping. It should only take about 2-3 minutes per side, and the crust should turn a beautiful golden brown. Lay briefly on a plate with paper towels (they weren’t really very oily – the paper towels were just a precaution). Serve and eat promptly!

I found this guideline on a delightful blog here: http://www.daringgourmet.com/traditional-german-pork-schnitzel/