When I learned that I’d be making a second out-of-state trip in two weeks, I was really pleased. I realized a little more than a year ago that my dream job would be driving around the country and eating. If I could get out of town with some family or friends three times a month, I’d do it. The problem – and I use that world loosely – is finding the new things that would make this adventure perpetually thrilling. Over the year or so that Marie and I have been doing this blog, we’ve been eating at known favorites less and less in favor of trying new places. There are one or two big favorites of ours in Atlanta that we haven’t revisited all year.

Take Knoxville, for instance. With my son and I in town for some family business, I knew that I would like to enjoy two small meals alongside a little of the shopping that I enjoy in that good city. Before I started the blog, I might try one new place, but then swing by Petro’s Chili and Chips for a snack on our way out of town. But because my focus is on trying more new things, I looked a little further afield, and thought that maybe we should find someplace new to us. So I got a couple of ideas around I-75, and decided to let my son pick, based on how hungry he was. We could either stop for a barbecue sandwich in the town of Sweetwater, or he could wait an hour and we could grab something on our side of Chattanooga in the north Georgia town of Ringold. This was a sucker bet; my son was born ravenously hungry, and doesn’t much care about having small portions a couple of hours apart; he’d rather have one gigantic meal and hibernate for a while, and the less walking around, the better. His body’s going to make him regret that decision. Hopefully, he’ll figure it out.

If you’re in the market for large portions, Bradley’s BBQ in Sweetwater, a round and easy-to-remember sixty miles north of the Georgia line, is what you need. I told my son up front that we had split a small pizza just two hours previously and that he could only have a sandwich and one side. He grumbled and pled for more, and looked longingly at the giant plates being brought to the tables around us. Oh, and I made him take a walk after that half a pizza and only allowed him water to drink. What cruel taskmaster am I, to try and restrict his calories and make him exercise a little?

Sweetwater is the home of the Lost Sea, one of the all-time great tourist attractions. It’s an enormous cave with a freakishly big underground lake. If you want to get an idea of how big they’re talking about, check out this report by a gentleman who mapped out some of the lake in 1975 before the exploration was called off due to safety reasons. There could be a live pleisiosaur down there and we wouldn’t know it. I’ve been three times; it’s terrific fun. I’m glad to report that, with Bradley’s BBQ, there’s a second reason to pull off at exit 60. 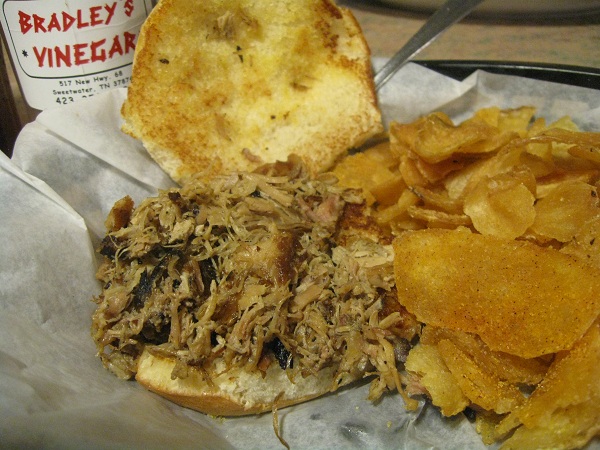 One of the things that struck me the most about our visit was how radically different the crowd was from the group with whom we had enjoyed pizza at Knoxville’s Tomato Head earlier in the evening. Despite being around since 1990, Tomato Head is drawing a very young, hip crowd of twentysomethings. Until we finally spotted a few scattered whitehaired men and women having supper with their college-aged children, I was quite convinced that I was the oldest person there. Bradley’s, meanwhile, is a much younger restaurant – I believe that it opened in 2005 – but the community in Sweetwater and nearby Athens – eastern Tennessee borrowed the names of all its towns from other states – is much older. This is very much a nice family restaurant that gets a lot of its business from people looking for a nice Friday or Saturday evening out. I was pleasantly reminded of the way that Zeb Dean’s in Danielsville has its quite large crowd of Saturday night regulars. The large restaurant seems to employ a small army of servers, who somehow avoid banging into each other going in and out of some very badly-planned doors to the kitchen.

Unless I missed it, Bradley’s didn’t have any stew on the menu, so we each had a pulled pork sandwich. My son had his with a side of cole slaw – very creamy and not diced to oblivion – and I had homemade potato chips. The meat was very moist and incredibly flavorful, and really didn’t need much sauce, but they have three on each table. I liked their vinegar best; they also have a quite thick sweet sauce and a not very lethal hot sauce. Nothing from our modest selections really knocked me off my chair, and nor was this meal in any way better than the two previous meals that we’d enjoyed in Tennessee. On the other hand, the barbecue was better than any of the three types that Marie and I had enjoyed the week before on our eight-meal tour of the Carolinas. It all balances out if you look at it that way.

Of course, now, because I’m neurotic this way, I have a new problem. I gave my son the choice between two barbecue places; this one and the one in Ringold, Georgia. Now I’ve got something else on my wishlist and I’m going to have to find my way back up there sometime soon. No rest for the wicked, obviously.