A heck of a lot of barbecue places have closed in the last decade. That’s the findings from an informal, anecdotal study performed by myself with no scientific input whatsoever, but it’s glumly inescapable.

I have mentioned before that, once upon a time, I maintained an unattractive, poorly-written Geocities page about Georgia barbecue restaurants. Curious as to whether we were close to approaching the number of shacks and joints on that list, I pulled up an old copy of it and counted them. I had 65 on the page, including a couple which only the hellbent and determined among completists would have considered visiting. Also, the goal of that page had been to document everything that I could find, good or bad, and the current blog is principally built around good meals, and not disappointments. Some of those 65 restaurants wouldn’t merit a mention here.

Then I started counting down the casualties. A full third of the restaurants on that list – 22 – had shuttered. I started doing it in, I think, 2000 and stopped in early 2003. Some of the earlier closings were reflected in updates, but many others have closed since then. Here are the restaurants that I visited since lost to time:

Benny’s, Atlanta: This was a place in that restaurant-packed strip mall where Johnson Ferry and Ashford-Dunwoody meet, and the owners insisted theirs was the best Brunswick stew in the city while yelling orders back and forth. “HOT, MILD OR MIX,” they would bellow at you. I loved this noisy, raucous place, and was sorry to learn that it closed.

Blackstock’s BBQ Barn, Lawrenceville: One of the state’s longest-running restaurants, this place was open from the mid-1920s to 2008, when the owner passed away. I think you got more history here than great food, but I remember enjoying the visit.

Bucky’s, Marietta: This place was on Sandy Plains in that Publix strip mall in the space where a Laredo is now, which was too large for them, and they literally closed within a month of me moving to this side of town. I tried not to be offended.

Bulluck’s Eastern North Carolina Styled BBQ, Norcross: I remember being really disappointed in this place, back before I learned the differences in how pork is prepared in various regions, thinking, wrongly and naively, that it was all about the sauce. They seem to have evolved into a catering-only business before evaporating, never giving me the chance to correct my mistake.

Bunk House, Crawford: This was a place that I always drove past between Athens and the mighty Paul’s BBQ in Lexington. I finally decided to stop in, and concluded I’d have been better off driving the eight or so miles on to Paul’s. They shuttered in 2001 or so.

Carither’s, Athens: Man, I miss this place! They were terrific, with awesome hash, and hot sauce that was like rocket fuel but somehow still brought out the flavor of the pork. I even liked this place for the way they’d throw your styrofoam plate of food in the microwave for ten seconds before serving it to you, which should not have worked at all, and they had the best sweet tea in the world, bar none. They closed in late 2006 or 2007.

Champ’s Real Pit Bar-B-Q, Smyrna: Located on South Cobb Drive about one traffic light away from the popular and long-lasting Old South, Champ’s has been closed for years but the building’s still for sale. Cobb County cops often meet in the parking lot. They served pretty good sliced pork and their TVs were always tuned to CMT and cranked to ear-splitting volume. 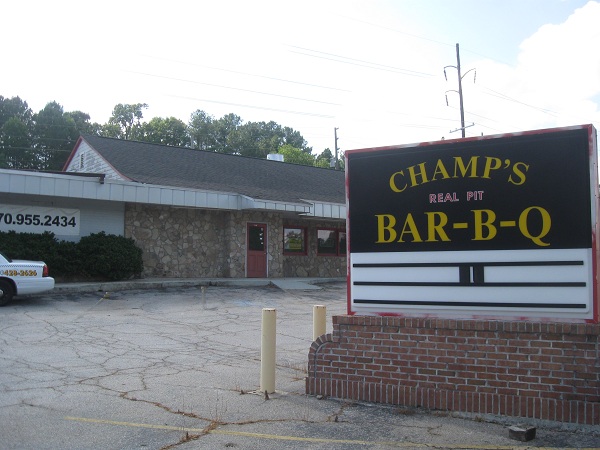 Corky’s, chain: A Memphis-based franchise that had a pricy plate of corporate slop. There were one or maybe two stores in the area. I tried it once in Duluth and thought it even worse than Sonny’s.

Dusty’s, Atlanta: I miss this place a lot, too, and lots of others feel the same. I remember being unimpressed on my first visit, but gave them another chance and concluded they were just off that one time. Great meat and excellent sides… oooh, that corn was so darn good.

Ed’s Mesquite BBQ, Alpharetta: This fellow had his sign up for what seemed like more than a year, but when the business finally opened, it only lasted about eight months. Quite the opposite of Dusty’s here, as subsequent visits showed the quality of everything from the food to the servers deteriorating with each passing week.

Famous Dave’s, chain: This national chain had at least three locations in the metro Atlanta area, but they pulled up stakes and moved a couple of years ago. I always thought they were easily the best barbecue chain, as chains go. They still have plenty of stores in other markets, including Nashville.

J.B.’s, Athens: I had a pretty good meal here once, enlivened by the wonderful staff. The building once housed Walter’s BBQ in the 1980s – R.E.M. were memorably photographed here by Laura Levine and wrote a B-side for the place – and was briefly the home of another, Hollis Ribs, which sadly closed in the summer of 2011. As of the fall, it was the home of a hot dog and sausage joint. Here is one of Ms. Levine’s iconic photos of R.E.M. 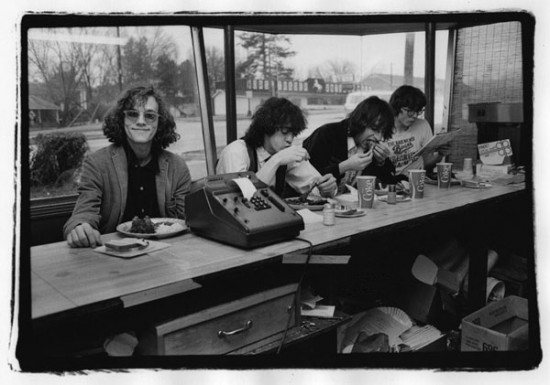 Kennesaw BBQ House, Kennesaw: I only ate here once and thought it was pretty good. Apparently it had been around a while, but vanished around 2004 or so.*

One Star Ranch, Alpharetta: There used to be three Rib Ranches around town. This one became One Star in the late ’90s and served up pretty good Texas-styled barbecue until it shut down in 2010.

Pavlov’s Pit, Tybee Island: When you drove onto the island, this place was almost immediately on your left, I think. They had a really good mustard sauce. Gone for years, evidently.

Raleigh’s BBQ & Blues, Decatur: This place had, hands down, the best roasted corn that I’ve ever tasted, and the pork was pretty good, too. They were around the corner from Eddie’s Attic and didn’t last very long.

Red’s Backwoods BBQ, chain: I think that there were only a couple of these in Gwinnett and Hall County. It was pretty corporate, but small, and I really liked the sauces. It would appear that there is still a single restaurant left, down in Boca Raton, Florida.

Rocking Hog, Alpharetta: I’m not sure what’s in this location (Kimball/Abbots Bridge and Jones Bridge) these days; it is one of those cursed spots where nothing lasts for more than a few months. In 2002, this was a big family-friendly corporate-looking place with some excellent barbecue, far too big for the crowd. We ate here several times before they shut down and had a great meal every time, but they only lasted about half a year.

Rockin’ Rob’s, Decatur: This was the previous incarnation of what is presently Maddy’s, a very good place that I should revisit soon. I think one of their owners might have left, or something. Like I say, this isn’t really scientific. On that note, it’s perhaps surprising just how few of the very popular and trendy ITP BBQ joints that I actually end up visiting. I’ve only been to Fox Brothers once – loved it – but haven’t tried Community Q or DBA like everybody else seems to. I should probably rectify that one day. Anyway, before it was Rockin’ Rob’s, it was a kosher BBQ place that I, snobbishly and stupidly, never visited because I was a young punk who insisted that barbecue was pork and pork was barbecue and I had no interest in trying anybody’s beef or chicken. Idiot. Before it was that place, it was an Old Hickory House. That’s at least four barbecue restaurants in the same place going back forty years or so, which is pretty impressive in its own weird way.

Springhouse, Athens/Winder: I’ll never forget this place’s hideous little mascot, a frightening half-pig half-chicken beast. I never knew what the heck these guys were thinking, designing such an ugly critter. Anyway, they were in Athens for years and they moved to Winder for a while before returning to Athens and closing. I think I only ate there when they were in Winder and wasn’t really impressed much.

Texas BBQ, Marietta: This was on Delk Road just west of I-75 and didn’t last very long. I seem to remember that they had a somewhat impractical two-story dining room and that the fellow at the counter took the unusual step of telling me that I would enjoy the chopped beef more than the pork, and I should order it instead.

US BBQ & Grill, Atlanta: Of this place, not even the building exists anymore. It was where that Piedmont Hospital-affiliated medical building on Howell Mill Road right at I-75 now stands. Once upon a time it had been a Copper Kettle – remember those? – but for its last three or so years, it was this very good little barbecue place which served up at very low prices. I ate here a lot, got out of the habit, and before I knew it, the property had been razed at the same time that the old Castlegate Inn property was sold to become that huge development across the street.

Do you remember any of these restaurants? Can you recall any other Georgia barbecue places that are no longer with us? Share in the comments if you would like.

*(11/11/11) I learned today that the Kennesaw store was an outpost of Fred’s Bar-B-Que House of Lithia Springs, which is still going strong and commanding ridiculously big lunch crowds. The Kennesaw location indeed shuttered in April, 2004. More on this when I write up my visit to Fred’s a little later in the month.

One thought on “Looking Back at Barbecue Long Gone”