Last month, I shared how our trip to Mississippi found me looking, unsuccessfully, for tamales in the wrong part of the state. The tamales that I did find, at Petty’s BBQ in Starkville, were not at all like what I was expecting. Obviously, regional and family recipes are going to vary, and that’s a great thing, but I was sort of hoping for something in particular – thick, starchy cornmeal boiled in a corn husk – and did not get it. I resolved that at some point, I’d make sure that the road took me back to the Mississippi Delta and I could hunt around for other takes on the dish.

So I was quite surprised when, just a few weeks later, I found homemade tamales for sale at the Marietta Square Farmers Market. They’ve actually been right under my nose for ages at the Zocalo stand. I’m such a chump. I’ve been shopping at the farmer’s market with Marie for all this time and occasionally snuck a few samples of chips-n-salsa and it never even occurred to me to look twice at what these good folks offer. They sell tamales, prepared the night before, in bags of a half-dozen for $15. 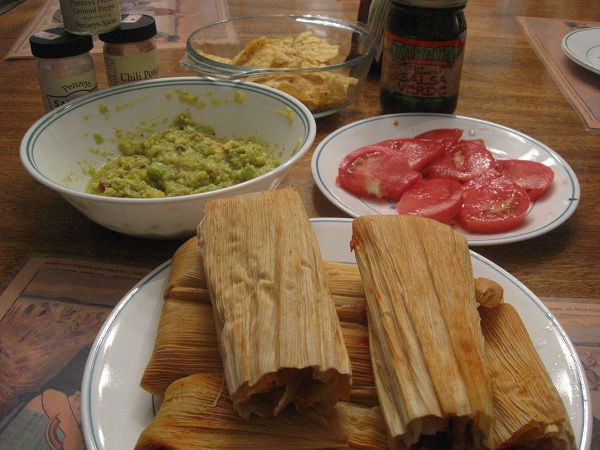 Zocalo opened its first restaurant in 1995. I’ve never visited, but evidently, I should. It appears to be one of the first Mexican restaurants in Atlanta to make the strong claim of being traditional. For many years, they didn’t even serve chips-n-salsa, as that is an American tradition. The restaurant slowly grew from its location on 10th Street into two other stores. Sadly, the recession hit it pretty hard and the stores in Decatur and Grant Park shuttered. The owners, brothers Marco and Luis Martinez, needed a new revenue stream, and fast. They’d already capitulated on the chips-n-salsa issue, and began looking into placing a small variety of pre-packaged salsas in grocery stores.

I should digress here, especially since I’ve mentioned Mexican-style places in this blog several times this month, and explain that while I do feel strongly about traditions being upheld and want to applaud restaurants that do it the original, right way, I personally used to really, really love the pleasure of absolutely gorging myself stupid on chips-n-salsa. Times and tastes change, and red salsas no longer hold the attraction that they once did. I still keep a bag of Golden Flake brand Maizetos in the pantry, and usually eat them with Zapatas brand medium green salsa verde. The typical red ketchupy salsa usually found on tables at all the El-This-Los-That places around Atlanta, well, that’s not what I’m looking to eat anymore. Michael, a buddy of mine in California, once explained, “that stuff’s not salsa, it’s Marinara sauce.” I still sample with a smile, but the days of keeping the server at hard work constantly refreshing me are long, long gone.

So anyway, the fellows at Zocalo decided to try out a line of salsas at the farmers market on Peachtree Road. They found they were definitely onto a winner, but perhaps not necessarily one that can be packaged and shipped away quite just yet. Instead, they keep their kitchens open all night from Friday to Saturday morning, making tamales and, I believe, seven fresh varieties of salsa, and then send sales teams to something like thirty different farmers markets in Georgia, Florida and in Chattanooga selling salsa that’s just a few hours old. This has proved to be a really good idea. According to a profile in Atlanta Magazine in March, they sold 54,000 units last year and are hoping to hit 70,000 in 2011. 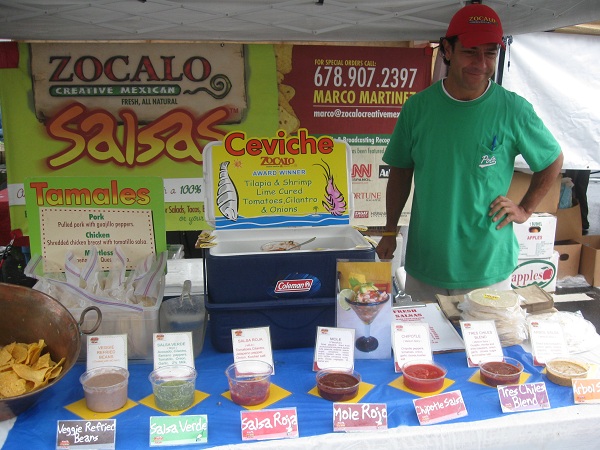 After all this discussion, I hope I’m not hitting too sour a note when I say that the tamales were really just okay. We enjoyed some for supper the night that we bought them, along with some astonishingly good brandywine tomatoes and guacamole that Marie made from avocados that she bought that morning. We couldn’t quite get the tamales to heat evenly through, although the pork, spiced with adobo salsa, really was quite tasty.

Clearly, what is still needed is a trip to the Delta and a tamale straight from a boiler, with none of this business of packing in ice and reheating. But that’s okay; I am certainly grateful of Zocalo giving me the chance to try the real thing, and I made sure they knew of my appreciation. The following week, I asked Marie to bring me home a container of their amazing arbol salsa to eat at home with Maizetos. It’s the least I could do.

2 thoughts on “Pork Tamales from Zocalo”