The Alabama Department of Tourism puts out a little brochure, updated every couple of years, to highlight all the good eating to be found in that state. You can view a PDF of this fun document, 100 Dishes to Eat in Alabama Before you Die, and marvel at all the interesting meals that they’ve found. A couple of things occur to me here. First, heck, we drove right past the Log Cabin in Mentone on this trip and did not stop for an order of chili corn pone. Second, I sincerely hope that when Ric and I next go to Mobile, we visit one of the places on this list. I’ve been thinking about The Brick Pit for several months, after reading 3rd Degree Berns’ rave review of the place.

But had I studied this brochure in detail before we did our little Bama BBQ Tour around Lookout Mountain, I might have seen the mention of the Jo-Jos at Bar-B-Q Place and asked, not unreasonably, what the heck are Jo-Jos?

Well, after our meal in Hammondville, we drove back through Valley Head and began the climb back to Mentone, turning instead to the right and up to Desoto Falls instead. There’s a “swimming hole” up here – really a small reservoir created by a dam – where my mother and her crew used to swim better than fifty years back, and it’s still attracting small crowds getting a break from the heat. I’ve seen video of the falls – some maniac went down the pair of them in a kayak – and they are much more impressive in the winter. In a warm and dry August, it’s just a little curiosity. My daughter and I looked around and waved at a troop of Boy Scouts whose expedition brought them out on the other side of the reservoir. There’s a huge Scout retreat on the mountain, along with sixty-eleven summer camps for elementary schoolers.

From there, we went to visit my mother’s cousin Judy and let her have a little baby time. He was in a fine mood, and didn’t blink twice at her small dachsunds, who yipped around the place. We drove over to the property where my grandfather’s house once stood – it was torn down years ago, and much of the land is now owned by a sheep farmer – and then drove down the “old cut” back into the valley and Fort Payne.

I don’t know whether the locals have noticed it, but I haven’t been to Fort Payne in better than twenty years and have something to say about it. I was never impressed with small towns as a kid, because kids are stupid, and never at all impressed with Fort Payne specifically because I, specifically, was stupid, but either nostalgia has turned the old place into something a little more vibrant in my memory and it has deteriorated into a hole today, or it has been a hole for forty years and I’m just making allowances out of respect for the past and kindness towards my parents. The mountains are beautiful and many of the people are terrific, and I suppose that’s what counts the most.

We stopped by a Sav-a-Lot on the main drag through town, Gault Avenue, to look for some Buffalo Rock. They didn’t have any, but the cashier was a sweetheart. We drove south, past where the soda fountain used to be. Almost sixty years ago, my dad and his crew had pulled a lengthy, detailed prank – well, that’s not accurate, as “prank” implies an intent of harmless mischief rather than what they pulled – on this very stretch of road involving two dumpsters, a long line of gasoline, a dropped match, a trail of flame, two spectacular explosions and a police investigation. Driving on this road almost sixty years ago, I’d have had to swerve to avoid a fire my dad started. I later asked this man if I could have a curfew extension to see Rocky Horror and he ordered me home at five in the evening.

Bar-B-Q Place opened in 1984, by which time the good citizens of Fort Payne no longer had anything to fear from my pyromaniac parent. It’s a small place on the south side of town. There is another barbecue restaurant called Ol’Tymer on the north side, and I got the impression that my mom’s cousin prefers that one. I have to say that our very first impression of Bar-B-Q Place was overwhelmingly negative. Do not park in back of the restaurant. Just don’t. You know how some barbecue joints, you step out and smell smoke and it’s the greatest smell in the world? We stepped out of the car and smelled something abominable near the building out behind the restaurant, some hideous mix of food waste and grease and all nearly retched. Fortunately, we recovered in time for a pretty good meal. 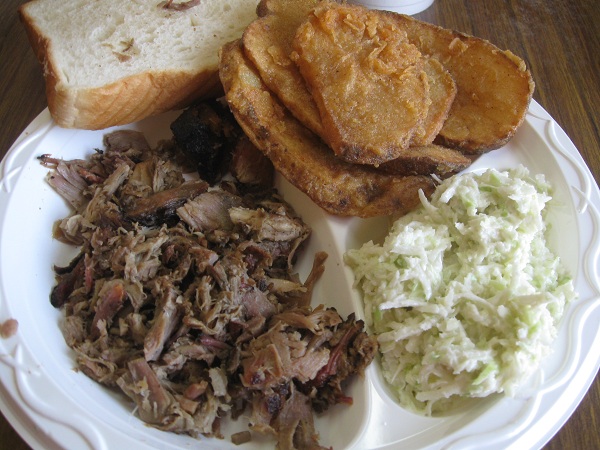 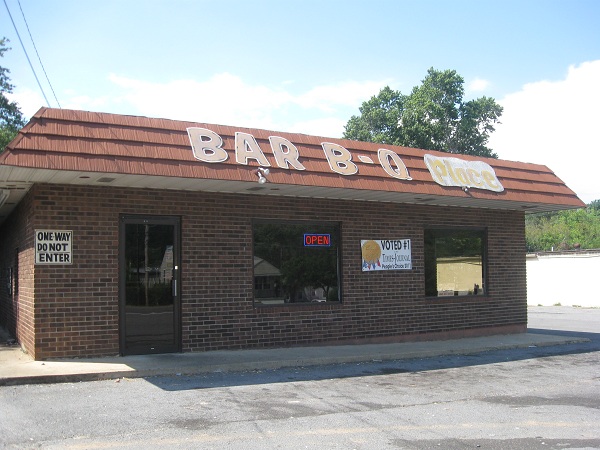 They serve up Memphis-style barbecue here, and if they’re not quite in the same league as that city’s mighty Bar-B-Q Shop, they’re not doing anything wrong, either. It’s chopped pork with sweet brown sauce, served on a sandwich with a scoop of slaw. Mom had one of these and thought it was terrific, and Marie had the chopped beef and said that it was even better.

I had the pork plate with some of those Jo-Jos, and knock me down if these don’t absolutely deserve to be in that tourism brochure. I thought the chopped pork was just fine, smoky if just a little dry, and I liked the way the hot and sweet sauce complemented it, but these potatoes were really something else. I believe that they boil them until they’re really soft, and then slice them and fry them with some seasoning. They’re incredibly light and fragile, but crispy. Only a madman would prefer frozen, trucked-in fries to these potatoes.

Where this restaurant did stumble was with the desserts. My mom and daughter each got banana pudding and it didn’t meet approval from either of them. They said that it tasted like gelatin. Personally, I thought it was just fine, but when you spend a day like my daughter does on these tours just having desserts everywhere you go, you sort of expect perfection, I guess.

I didn’t learn very much about the Bar-B-Q Place, despite the restaurant being empty when we arrived. I thought the staff was friendly, and I spoke with one fellow about how impressive their long list of “Best in DeKalb County” awards was, but customers started arriving behind us and they got very busy again. It seems like a place that spends a lot of time being busy.