So I decided that we should have a little barbecue tour around DeKalb County, Alabama. The valley between Lookout and Sand Mountains, where my parents lived in the 1950s, is still really isolated from today’s bloggers. With an aging population and little industry anymore, there are very few reasons for younger people to stay here, and, other than the gorgeous land around the somewhat-unimpressive-in-August Desoto Falls, little to bring tourists through. Well, there’s a church that’s literally built into a mammoth rock, and that’s pretty neat, but even Manitou Cave is closed to the public now. Haralson’s Drugs, which once sported an awesome soda counter, is long gone. Well, I knew that place wasn’t gonna last when they quit carrying comic books in 1981 or so. At any rate, there are very few restaurants in the area, and unless you’re a fan of the country band Alabama, whose fan club and museum is larger than some airports I’ve seen, or unless your parents grew up here, I can’t imagine what would bring you to Fort Payne or any of the surrounding towns.

Hunting around on Urbanspoon did find a place in Hammondville called Big Jim’s Bama Q, which, unlike every other restaurant in the region, actively courts guests with a web presence. Nobody else in the area seems to want to bother, probably unaware that there’s a whole culture of weirdos like us who go around collecting restaurants, particularly barbecue places, and sending readers to check them out as well.

On the other hand, following up my discussion this past Friday about Urbanspoon rankings in the Southeast and Deep South, suffice it to say that my lowly # 17 placing on Urbanspoon Alabama (of 27!) will not much be troubled by posts about restaurants in this unbothered area. It might take some work from the couple of places in Phenix City that I plan to visit this coming weekend to nudge me up much there. Maybe I’ll climb to # 14 or something in October.**

Back in time a month ago, when we actually made this trip, we left Summerville and got eight or nine miles along Georgia-48 before traffic came to a stop. There had been a major accident on the road ahead, and the local fire department had no choice but to divert everybody onto the roads around to park and wait it out. We were stranded for about half an hour, which gave Marie the chance to nurse the baby, and for my mom to exercise her enviable talent of striking conversation with absolutely anybody. She might even be better than Marie with this. She chatted with a fellow bound for Huntsville, and with two bikers who were a little better informed as to where this road would let out in Alabama. It had been a long time since my mom was bound for this end of the valley, and she’d forgotten where Alabama-117 would take us.

After they finally cleared the road and let traffic back along, we enjoyed the gorgeous view as we descended below Mentone. We drove through Valley Head. Mom recounted that growing up, it was always a big event when Fort Payne (then DeKalb High) played Valley Head on Thanksgiving weekend. I visited the Valley Head School website to see whether this tradition continues today. Fort Payne’s not on their schedule. Nor has the schedule page been updated since 2007. I phoned the DeKalb Board of Education, because I’m just this way, to ask whether Fort Payne High still exists. Now their website had been updated within a week of my call, but somehow, Fort Payne High had been left off the page, skipped entirely, much to the surprise of the kind-voiced secretary who took my call*. Nope, not a lotta Urbanspoon traffic coming my way from this tour. 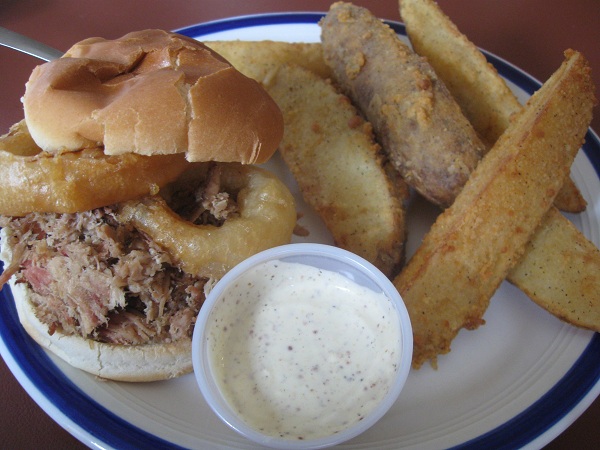 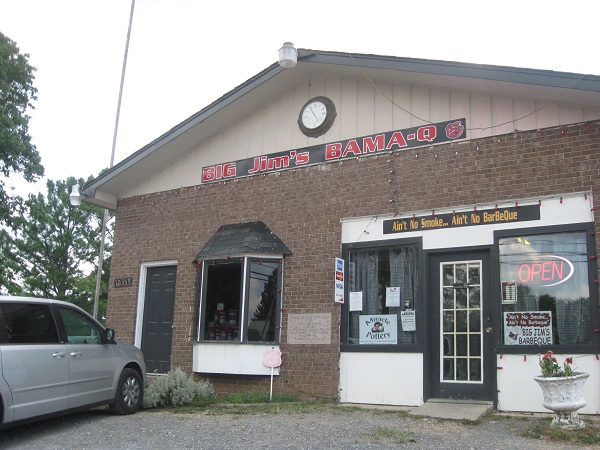 We found Big Jim’s Bama Q before we even realized we were in Hammondville. It is a fairly small place, built in to what used to be a house, and it was completely packed with people enjoying lunch. There is only one restroom, and no space for highchairs. We propped the baby’s car seat in one of the chairs around a large, once-elegant dining room table that awkwardly shares a room with two other seats. I did something to catch the angry eye of some heavyset fellow with a white mustache, sharing the room with us. Man, that dude did not like the cut of my jib.

The service here is completely frantic, with bursts of welcome and kind attention coming between the buzzing madness of getting food and additional cups of sauce to all the tables. I genuinely liked this place a lot. It was chaotic and wonderful. I told our server that I found them on Urbanspoon and she asked us to please vote for them, as she was happy that they were ranked # 7 in Alabama barbecue. I was tickled that she knew that; of, presently, 316 competitors in rural Bama (outside the state’s six “major metros”), that’s a fine achievement. And this place deserves it. It was my favorite of the four restaurants that we visited on the trip.

I knew that I wanted to find at least one place in north Alabama that offered white sauce, and Big Jim’s was indeed the only one we found. Here, you can order a sandwich called a Bar-B-Ringo, which is pulled pork with onion rings and white sauce. The pork is smoked just perfectly and the sauce, which ranks among the best white variety that I’ve found, goes incredibly well with it. It’s absolutely delicious, and I had mine with an order of gigantic potato wedges.

Marie had a pulled pork sandwich and she enjoyed the more traditional red tomato-vinegar sauce along with a side of crowder peas. This place offers a pretty good pile of daily special vegetables not listed on the menu. That board is where my daughter found the creamed corn, which was truly excellent. She and my mom also had slices of red velvet cake.

We didn’t linger and didn’t get a chance to speak with anybody beyond our server, who was already being pulled in four directions. We were already more than an hour behind schedule and had another pair of stops to make back up on the mountain before going on to our next meal.

(*This is presumably because Fort Payne High is part of the separate Fort Payne School System. Why on Earth would an employee of DeKalb Schools not know this?)

(**Ah, bliss. I’ve been ranked # 1 in Alabama for months now, and this trip helped more than I expected.)