I heard a story once. Seems there were some pledges at an Alabama fraternity. Two were from Birmingham and two were from Montgomery. The two from Birmingham were waxing eloquent about Pete’s Hot Dogs. This legendary place, which closed last year after the very sad death of its owner Gus Koutroulakis, is part of the hearts and minds of generations of travelers and locals. The fellows from Montgomery were equally insistent that Chris’ Famous Hotdogs was even more magical. As the argument became spirited, the older frat brothers said that the only fair way to settle it would be to provide a taste test, and the four were commanded to leave town, two going this way and two going that, and return in six hours with enough hot dogs for everybody in the house.

And if you haven’t heard this story before, you still know how it ends. The pledges spent hundreds of dollars on hundreds of hot dogs and transported feasts back to campus for their brothers. Everybody ate well. And when it was over, of course, after lengthy deliberations, the fraternity’s officers declared Pete’s and Chris’ to be equally good in a so-called tie, and thanked the pledges for being so kind as to feed everybody.

Of course, when I first heard that story, all I could think was, “There’s a Chris’ Famous Hotdogs in Montgomery? Heck, I need to eat there sometime.” 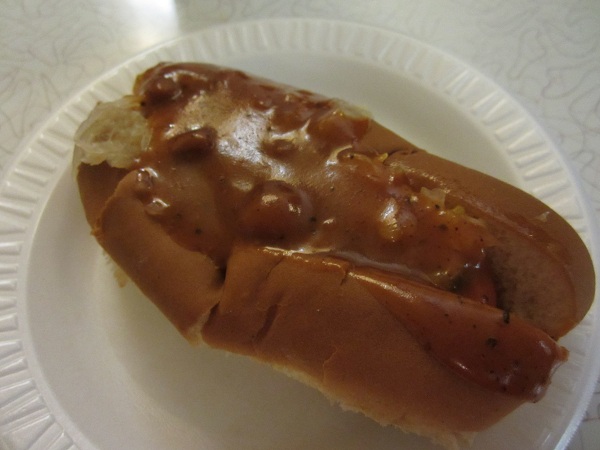 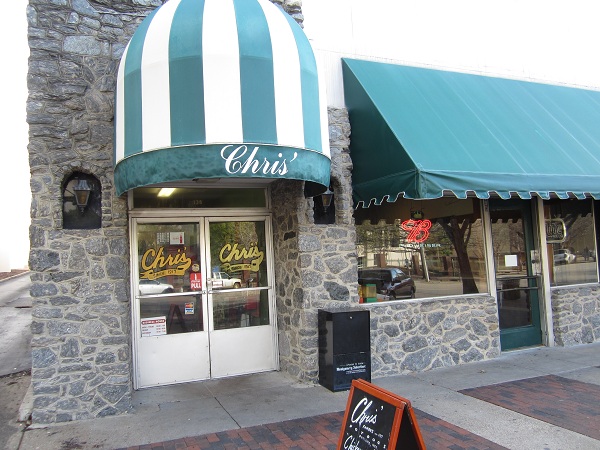 Montgomery’s always been that city that I’ve driven past. Now that I’ve stopped for a few moments and looked around, I’m stumped by it. It’s pretty much the Macon of Alabama. I’m still not entirely sold on the need for a Macon in Georgia.

In the previous chapter, I referred again to how awful and boring I-65 is. I saw less of it on this drive between Mobile and Montgomery than any other visit to Alabama, having left the interstate at exit 45 and not returning until exit 130, and then hopping off for Montgomery when the road’s fellow freeway, I-85, is born thirty-some miles later, and I still wanted to drill a hole in my skull with a Black & Decker. Good grief, what a chore.

Chris’s is in a very interstate-friendly spot downtown, right off I-85’s first exit. The restaurant was started by Chris Katechis in 1917. Like so many other hot dog vendors from this region, Katechis immigrated to the United States from Greece, specifically the island of Corfu. Chris died in 1988 at the age of 93, but unlike his friendly rival in Birmingham, he left behind a store that would continue after he’d gone*. It is a beautiful relic of bygone days. It had been a simple “curb service” counter like Pete’s and so many other places from the period, but Montgomery’s city fathers grew tired of looking at the long lines of people waiting outside for a place indoors and passed an ordinance that required Chris to add a larger dining room in the late 1940s.

Almost as much as the food, this is what has made Chris’s an absolute must-see place. If you like old architecture and design, you just have to get down here and check this place out. The original counter space is preserved, and behind those stools is a really beautiful, curving wall of glass cubes that separates the counter area from the dining room, which has soft lighting and a real vintage style. We’ve mentioned places in our blog that look like a restaurant where Sonny Corleone might have eaten (Luigi’s in Augusta GA) or where Jim Rockford might have met somebody (Colletta’s in Memphis TN), but this is absolutely where Philip Marlowe might have been. Everything about it is jawdropping, eyepopping, straight out of the late 1940s.

Marie and I love the detective fiction of Rex Stout, and have commented from time to time on how people in this period, the “classic” postwar days of Nero Wolfe and Archie Goodwin, when Stout was at his most prolific, were just plain thinner back then, and how Wolfe’s 300 or 310 pounds really was incredibly gigantic. The narrow gap between the counter stools and the curving glass wall, and the “threading the needle” feel that I had of navigating it, marks me, personally, as having been incredibly obese for the late 1940s, and drives home just how huge Wolfe was meant to be. I’m not the healthiest cat you’ve ever seen, but I’m a long way from 300 pounds, anyway. “People were a lot thinner when this wall went up,” I laughed with the counterperson after I shimmied and danced my way through the gap.

I just had a single dog here. Priced at only $2.25, it comes with mustard, onions, sauerkraut and the classic chili sauce that has sparked a thousand arguments. Much like the secret ingredient-filled concoctions of Birmingham’s hot dog stands, it’s a spicy, thick, juicy mix of who-the-heck-knows-what? Some tomatoes and paprika and lots of other neat stuff that nobody will share. It was terrific. On most of my stops during this tour, I was ordering chopped pork sandwiches and skipping the bread, but I helped myself to every crumb of this.

This was a tremendously good little detour, but I had three more barbecue places to check out, and so I got back on the road. The road in question would take me past closer to ten of the darn things before I made it back to I-20. Anybody planning to cover central Alabama properly needs to put a lot more work into it than I can, I suppose.

*That’s perhaps unclear. The late Gus Koutroulakis was not the founder of Pete’s Hot Dogs, although he came into possession of the store in the 1950s, I believe. He did, however, wish for the business to close when he passed, and willed its iconic neon sign to an area museum to drive home that point.