When I woke on Saturday, I surprised myself by being a little hungry. After all that I ate on Friday, I didn’t expect that, but I also knew that I’d be eating a little less on this day, and light salads for a couple of days after. I also surprised myself by sleeping as late as six, which is seven on my Eastern Standard Time clock and a couple of hours later than I normally rise. Still, I had about an hour to drive before lunch and five hours to kill, so I puttered around and played online and took a very leisurely morning. Eventually, I pulled on one of my Georgia Bulldogs T-shirts, checked out, went back to Jackson’s main street to photograph the restaurant where I was unable to eat the night previously, and wound my way down the road toward Mobile.

After a few miles, probably in McIntosh, I passed a restaurant serving breakfast. Heck, I hadn’t thought about that. Between you and me, there are a few places that give you an amazing meal for breakfast – Palmer’s Village Cafe on Saint Simons Island is among the best – but most days, I can take or leave it. Still, as the miles between that restaurant and my car lengthened, I decided that I would stop if and when I saw another breakfast place along my way. In time, I made my way into Washington County and found Webb’s Cafe in the town of Calvert. The sign suggested catfish might be had. Tragically, it isn’t, not for breakfast.

I opened the door and was blinded by the darkness. As my eyes adjusted from the bright sunlight to the dim interior, a voice called out “No Bulldogs allowed!” 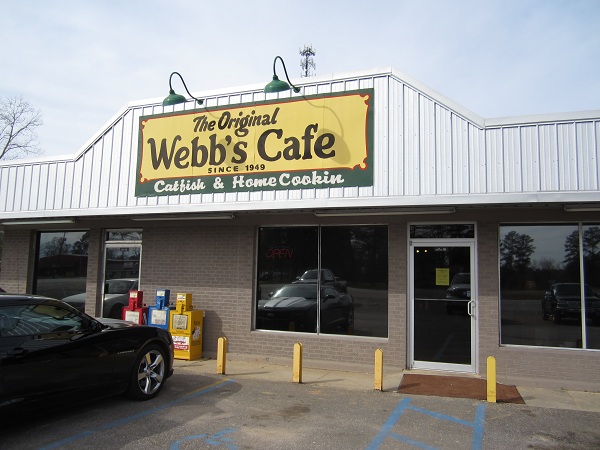 I blinked and squinted and looked for who was thinking they were trying to taunt me. I was hoping I would have the chance to say “An Auburn fan? I didn’t think they still had any,” but it was a smiling fellow with an embroidered crimson elephant on his shirt. I replied, “Well, I wore my dad’s crimson shirt as I drove through Tuscaloosa yesterday, do I pass muster?” He laughed and said, “You’ll do.”

He and his wife were actually on their way from Mobile to Tuscaloosa to see Bama host Mississippi State, a game the Tide won 67-50. Webb’s Cafe is their normal breakfast spot on the way to football and basketball games. We spoke for a few moments about my little barbecue tour and told them I was on my way to have lunch at Brick Pit. I was assured that I would love it.

As for Webb’s, it is a pretty old place, and one still in family hands. Vanessa Barnett is the current owner. Her grandmother, Edna Webb, opened the business in 1949, allegedly when US-43 was just a dirt road. It has relocated a few times, and was briefly known as The Bee Hive before returning to its original name. I just had an egg, a slice of toast and a bowl of grits with a glass of water, which broke the fast and wet my whistle. It did leave me wondering about their catfish, mind.

I wished my friend “Roll Tide,” and he wished me “Go Dawgs,” and the one fellow in the Auburn shirt ignored us and enjoyed the company of his old friends and the fine breakfast that they were having. This is a good place.

Substantially less good was a grocery store that I visited a few miles down the road in Mount Vernon. I still had time a’plenty to kill, and even though I made sure to buy some Grapico and some Buffalo Rock in Tuscaloosa, I wondered whether there might be some other regionally-available sodas in the area. I saw a store called Manning’s Food for Less and pulled in just before 10. It was next door to one of the best-named barbecue restaurants that I have ever seen: Bar-B-Quing With My Honey. I wished they had been open. Anyway, the only thing I spotted in the soda aisle that was at all interesting was Cherry Crush, which is curiously scarce around my neighborhood, and it was reasonably priced at $4.15 for a 12-pack.

I was a little concerned when it rang up as $5 and change. The register still showed the actual item price as $4.15. “That’s one heck of a lot of sales tax,” I said. The girl lowered her brow and asked me, “Where are you from?” as though my comment was all kinds of stupid. I said that I was from Atlanta. “Oh, well, down here, it’s the price, plus 10%, plus sales tax.” Ah, yes, we have those sort of grocery stores around Atlanta as well. I don’t give them my business. The only nice thing about Mount Vernon worth a darn was driving past a restaurant with the quite remarkably-punctuated name of The!! Oak Tree.

I was still early when I got to Mobile, and so I made a pit stop at a Bruno’s grocery store and found a bottled six-pack of Abita root beer. They didn’t charge me an additional 10%.

Mobile is a terrific town. Longtime readers may know that I have made frequent trips down here in the spring with Ric, and we’ve seen a small amount of the place and had some very good meals. On one of those occasions, stuffed from a table full of food at Wintzell’s Oyster House, we went record shopping at a place on Old Shell Road called Satori Sound, which, these days, only sells coffee and not records. I noticed Brick Pit then, and absolutely loved the moxie of their sign, which proclaimed theirs, proudly, as the best smoked barbeque in the great state of Alabama. I said that I’d have to try that one of these days.

Over time, I’ve seen Brick Pit’s legend grow. They were featured on Man vs. Food, and the estimable 3rd Degree Berns gave the restaurant a stunning ten of ten when he wrote about it, one of only three restaurants in the southeastern states to get that award. (I’ve visited another, Memphis’s Bar-B-Q Shop, and 3DB was darn right there.) It’s also featured on Roadfood.com.

So, yes, expectations were high. Brick Pit stampeded over them with some of the best pulled pork that I’ve ever had. Friends, I’m not kidding, this is downright unreal. I told the owner, the incredibly genial Bill Armbrecht, who sat with me and told me all about his awesome place, that I might as well go home from here, because I wasn’t going to have anything better the rest of this tour. I didn’t. Four other barbecue places stepped up over the course of the trip, and they each got mowed down by Brick Pit. 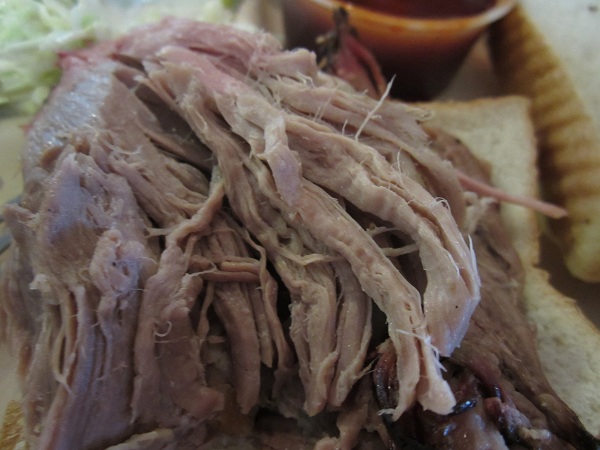 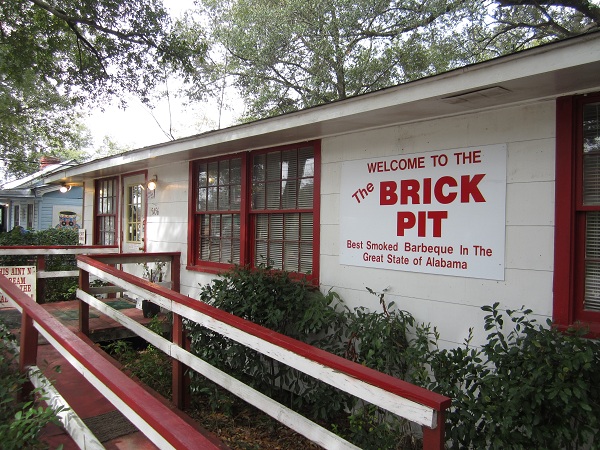 Bill saw me snapping pictures outside and opened the door a little early to me. He told me that the pulled pork is smoked for a remarkable thirty hours, which is why he uses a mix of 90% pecan and 10% hickory. He believes that hickory alone is too harsh for that long of a smoke.

The resulting meal is incredibly tender and moist. It falls apart on the fork and doesn’t need a drop of sauce, although there’s a mighty good one available. The spicy sauce is thick and gooey and has some impressive burn behind it. Bill gave me a rib to try. Corner Que in Smiths Station has ribs almost this good, but otherwise, I think Brick Pit has this category to itself. It was, in the truest sense of the word, an awesome meal.

Now, the interior of this place is like a little museum, with signatures and photographs covering the walls. Bill took me on a little tour of it, showing off some of the many Crimson Tide legends who’ve come to eat here, and his afternoon in the spotlight working alongside the pit crew catching tires for the Philips #7 racing team. Was it Michael Waltrip who was their driver? My head was spinning with facts, my mouth was pleasantly burning with unbelievably good pork and sauce, and my belly was full. I missed some details. I loved seeing pictures of his daughter. He and his wife had a baby girl quite a good deal later in life than most, a “miracle baby” that he’s got every reason to be so proud of.

Frankly, this was so good that I’m amazed I am able to construct sentences about it. But I had an awful lot of road to cover. A lot of awful, awful road.

I had hoped that detouring and taking US-31 would save me from much of the stultifying boredom of I-65. This way took me to the town of Brewton, but first it spun me through the very small town of Flomaton, which is also the name of what the Progressive people are building in every office so that customers can get the experience of their television spokesmodel, “Flo.” Flomaton is right on the Florida border, and Brewton itself just 45 minutes from Pensacola. 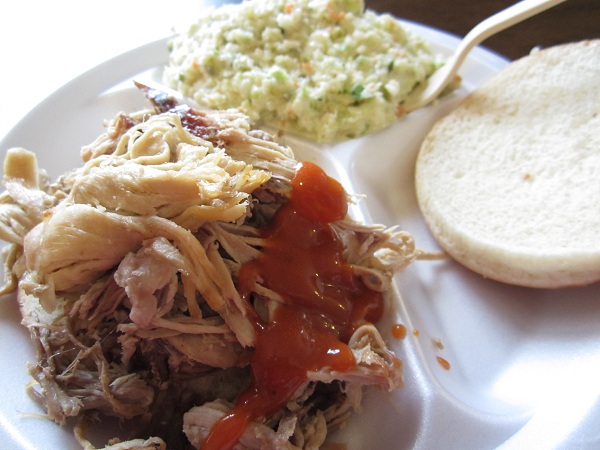 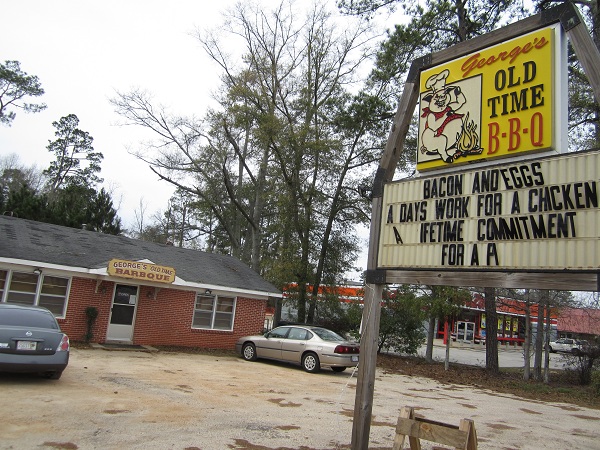 Brewton is home to George’s Old Time Bar-B-Q. Well, it isn’t anything personal, but while the people here are terrific and welcoming, I went by twelve barbecue restaurants on this trip, and the mathematical reality is that there would have to be one of them that I enjoyed the least. So it is. I only linger over a “bad review” if the restaurant actively aggravated me. George’s surely did not, and saying that, we will say no more.

US-31 is a small improvement over I-65, but it’s not much of one. Comically, I think that I’m psychologically conditioned to start thinking “Hooray, the interstate,” when I do not know where I am and have somewhere that I wish to be. So, I learned a year back that Real Pit in Greenville was in a little trailer-with-smoker in a parking lot near I-65, and the feeling, when I finally made it here, was that I was glad to see the interstate exit national chains appear, because it was time to get on the highway, without actually considering what highway it was. Fortunately, a very good sandwich from this trailer put me in a good mood for the next leg.

Real Pit smokes their pork for 24 hours over hickory, which Bill in Mobile suggested is the absolute limit for hickory wood before it alters the texture of the pork in a bad way. The result was very much like a place a few miles down the highway, Kendall’s in Georgiana. That’s no bad thing! The meat was very tasty and moist, and the really thick sweet red sauce went well with it. I suggest that either Kendall’s or Real Pit, which opened in 1990, would do as reasonable breaks from the endless road that is I-65. Real Pit is in the parking lot of the Shell gas station, next door to the Quality Inn. 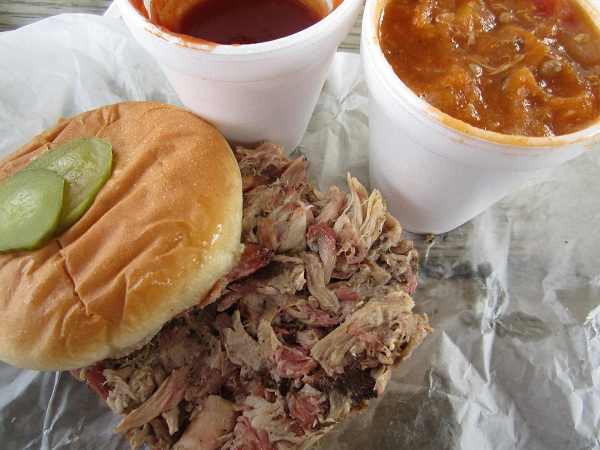 Nine BBQ restaurants down and, not surprisingly, not a one offered Brunswick stew. It’s just not common at all in Alabama. What they do offer at Real Pit, however, is something called camp stew, which is apparently the state’s way of selling Brunswick stew without getting a toe in the territorial fight between Georgia and Virginia about whose came first. Pork and chicken in a tomato-based sauce with corn and onions? Why call it something that it isn’t, especially when it’s as tasty as this?

The next leg would be a really I’m-making-this-worse-for-myself-than-necessary thirty-odd miles up I-65 to Montgomery. To illustrate the debilitating and boring braincrash impact this had on my psyche, the blog will take a slight break, during which we will actually be back in Alabama for even more barbecue, and return next week.

Other blog posts about the Brick Pit: