So, the situation as I was leaving Tuscaloosa was this: the sun had gone down, I was completely full, albeit well under budget, I’d met some great people and enjoyed some terrific scenery, but I was on a time crunch, with another 130-plus miles to go before my destination motel, and three more restaurants to visit. I was also pretty sure that I’d be getting sleepy pretty soon, before I had planned to. I had to press on through the darkness of US-43, which runs parallel to the combined routes of I-20 and I-59 in a southwest direction until reaching the town of Eutaw, at which point it drops away straight south. Eutaw is one of those towns where travelers have to pay close attention to the signs, because the road makes some surprising and abrupt left turns. It makes a long and gentle westerly curve into the downtown area and then drops south after that. I’m a pretty seasoned road tripper and it surprised and confused me more than these things usually do, anyway.

In the darkness, I found the next landmark along the trip to be a real eye-opener. As I got around a community called Forkland, my headlights illuminated some signs ahead and on the right. The first read “ACTA,” the second “NON” and the third “VERBA.” For the next minute or so, I sped past strange and angular shapes and unnatural shadows, catching glimpses of deeply irregular forms that I could not make out, and when I briefly saw a huge face in the trees, I figured that either the sauce at the previous stop was laced with some good acid, or that I was missing out on some tremendously awesome folk art.

It was, of course, the latter. Jim Bird has been making some amazingly weird and wonderful creations from hay bales and found objects, spending very little money but getting a huge return in attention and affection from the local community and travelers with the good fortune to come through when the sun is up and they can see all his fun work.

When I got stopped in Demopolis for the next restaurant on the list, I asked my server what in the world I had driven past. She loved Jim’s place and told me a little about it. It made me want to boot up my laptop and see more that minute. This restaurant was Smokin’ Jack’s on US-80. It opened in 2003, and Jacky Poole and his wife are drawing in a pretty respectable Saturday crowd. This is with good reason; Jacky is smoking some unbelievably good pork. 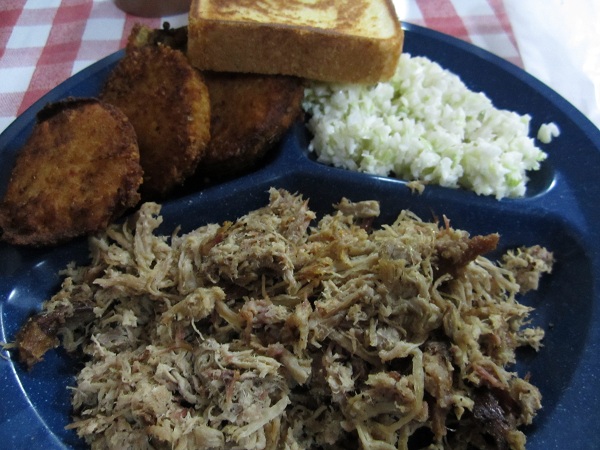 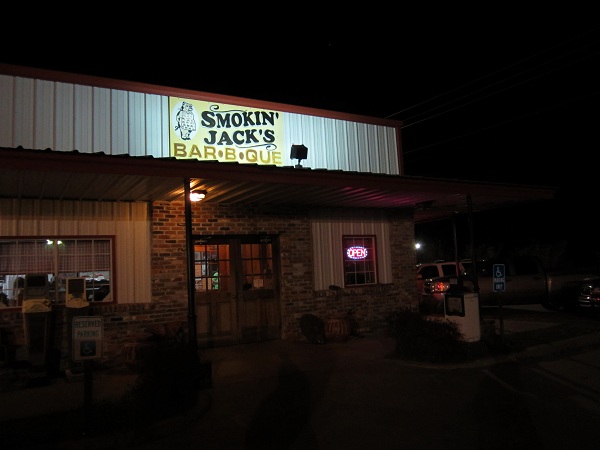 When Jacky first opened his restaurant, he was smoking over hickory in an open pit. Unfortunately, the construction of a hotel on the property next door has meant that he now has to use a conventional closed smoker. I ordered a chopped pork plate with two sides, which, owing to the higher-than-average price of a sandwich here, cost just as much as a sandwich with one. I figured that I was not going to finish the pork anyway, and I might as well sample the taste of two sides, right?

It turned out that this was by some measure the best meat that I had all day. The only other meal that I had Friday that was in Smokin’ Jack’s class was the first one, at Pig-N-Out in Hokes Bluff about eight hours earlier. The meat was moist and smoky and had been given a very generous rub of a spectacular spice mix while cooking, because it did not need any sauce at all. This was perhaps for the best, as the table brown sauce, while nice and peppery, would have accompanied some of the other meals that I had that day very well, but I was happy to retire it after just one taste here. Sadly, Jacky’s white sauce was, by some measure, the worst white sauce that I had all day. It really just tasted so much like ranch dressing that I started wondering as I left whether my server did not bring me the wrong bottle. No matter; that taste was easily washed away and forgotten when I had so much more nice and smoky meat to enjoy without sauce.

I had the fried green tomatoes and some marinated slaw. Both were just fine, although I’ve certainly had better tomatoes, and I’m sure that eating them here in February wasn’t fair to anybody. But really, who had room for either with meat this good? So I thanked Jacky and made my way, having barely touched my vegetables. I told myself that some salads and zucchini were definitely on the menu for the next week.

So I got back in the car and considered my agenda. At this point, I was doing fantastic on the budget, but so far behind schedule that it wasn’t funny. Plus, despite pacing and small portions, this last plate o’ protein had done me in and now I was tired. I thought about canceling the next two meals and staying the night in Demopolis, just getting a room in that hotel that caused the closure of Jacky’s pit. However, this would mean that I’d start Saturday something like 75 miles behind schedule, and Jackson – my destination – seemed a heck of a drive from Mobile as it was.

No, I needed to press on and at least try to get to Jackson, and if I got too tired, I would try to find a place in Thomasville, about halfway between the two cities. This was the site of one restaurant that I chose to cancel. It’s called Rogers, and used to be known as Little Pigs. I was looking forward to asking whether the present owner knew whether it was once part of the Memphis-based chain by that name. In the sixties, there were Little Pigs stores here and there from Mississippi to South Carolina, and possibly farther afield. I did not notice Rogers as I drove through Thomasville and got a second wind, but I did see Outlaws BBQ, which I had considered adding to my list. I gave it a wave and continued.

Between Demopolis and Thomasville, there’s a town called Linden which probably gave me my second wind around 9 o’clock . It was a complete ghost town. Its downtown streets were as quiet as the crypt. There was not another soul in sight, and no headlights for miles. Every business was closed. It was eerie, beautiful and almost magical in its sad, lonely way.

I arrived in Jackson around ten, and pulled right into a motel. I paid a little more for the room than I budgeted, but I was already thirty bucks ahead before skipping the planned stop in Thomasville, so everything was still fine, and the room was certainly a nice one. I stretched my legs for a minute and then went out to get my final meal of the day, but found myself stymied and with an extra $10 in the wallet at the end of the night. When I phoned Back Porch BBQ in December to ask their hours and make sure I could get something here so late, they told me that they were open until 11 on Friday nights. That worked just fine, because I was due in Jackson close to an hour before I actually got here. Evidently, between then and now, they decided that this town just wasn’t giving them the business they needed to stay open so late, and they now close at 9. 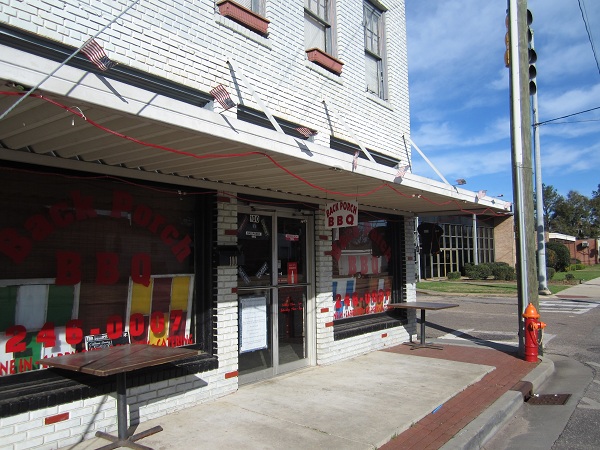 I stopped by again bright and early the next morning to at least take some pictures of Back Porch BBQ for the scrapbook. I regret not having the chance to eat here, but I wanted to be in Mobile promptly at eleven to start my second day. My experience of traveling back and forth between Columbus and Mobile has taught me that any day that includes the city of Mobile in any way is bound to be a very long one, and the earlier it gets started, the better off we’ll all be. So, Friday night, I drove back to the hotel, read a few dozen pages of the book that I’m enjoying, and slept like a baby for too few hours.