I’d only been to Tuscaloosa once before, in June of last year, when we went through on our way to Starkville, stopping for a couple of meals on our way back. I’d like to linger a little longer sometime, and actually visit the University of Alabama campus and see its legendary Strip, maybe getting a meal at the renowned Rama Jama’s. This visit didn’t leave me time.

Heretically, I found myself loving Taco Casa even more than the mighty Dreamland when we came through in ’11, but, as has been seen in this blog in recent weeks, I’m weird when it comes to California-style fast food tacos. So as I charted my course down US-43 from Winfield through Northport, I made sure to include one of the Taco Casa stores on the way. But first up was Northport, and another older business, Hicks BBQ.

Hicks certainly had some pretty good meat. These were Boston butts smoked over hickory and, because I forgot to order my sandwich dry, served drowned in a light brown sauce that was very tasty. It had a tang not unlike what Dreamland serves. Sadly, this good meat was accompanied by some really uninspired slaw that tasted astonishingly like what they give you at Chick-fil-A. The business opened in 1975 and presently employs a small group of staffers who were not born then, when the big smoker with the metal doors were installed. Heck, the mismatched, no-frills chairs and tables are probably older than them. It’s definitely a good place for travelers who enjoy older, cinder-block-wall restaurants to enjoy some pretty good barbecue. They also serve Grapico, which reminded me that I needed to make a stop while I was in town. 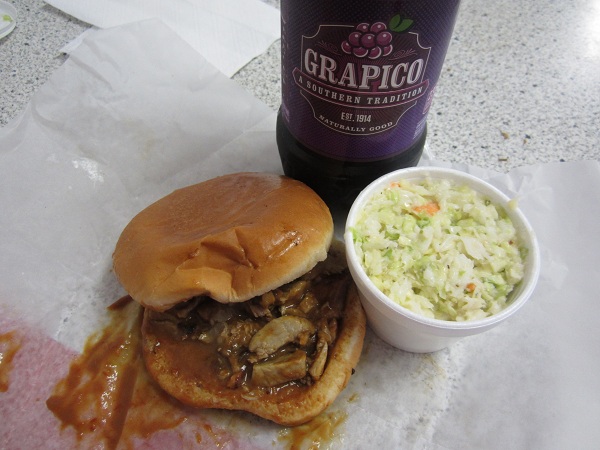 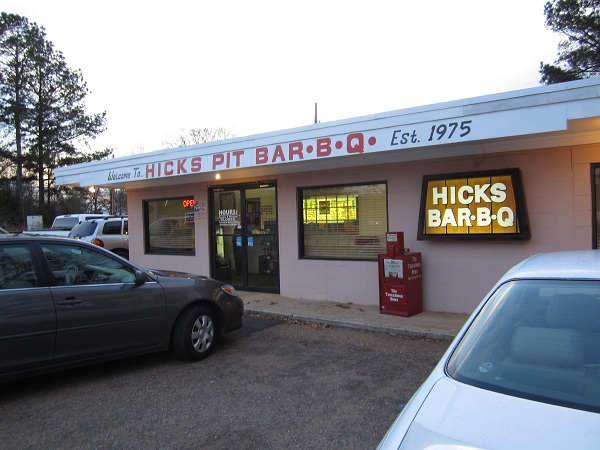 I was happy that Publix grocery stores have a footprint in Tuscaloosa, because their ATMs don’t cost me anything and their Alabama stores carry both Grapico and Buffalo Rock. Twelve-packs were needed for the road. It was while I was in Publix that the sun went down.

I’d been fretting this development for a few hours. Honestly, when I charted my route, it flatly did not occur to me that I’d have to worry about driving in the dark by myself. What poor planning! At least, with my next destination, I wouldn’t need to worry about having a navigator to help me see Taco Casa’s gigantic roadside sign, the silly and wonderful cactus. I’m not at all a good photographer, as you might have noticed, but the one thing that I have in common with good photographers is that I really love taking pictures. I was looking forward to shooting that big and ridiculous cactus sign. Sadly, the Taco Casa that I scheduled does not have one. It was destroyed in the tornado last spring. 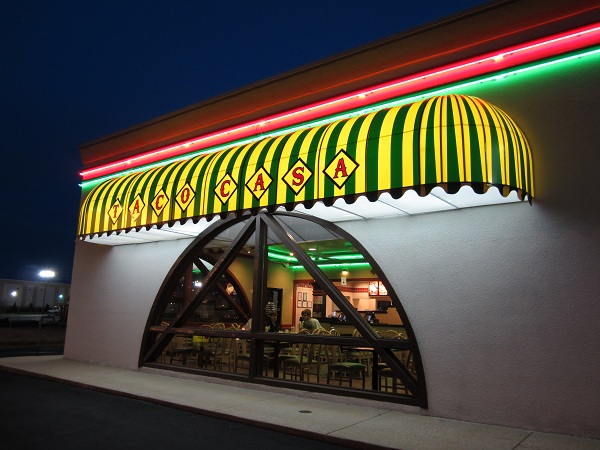 As you see, I didn’t eat much. I had just one completely wonderful and delicious taco for a buck fifteen and that was all this increasingly stuffed road tripper needed.

I was not completely clear about what the restaurant’s manager was saying, but I gather that the authorities in Tuscaloosa who are still trying to clean up the unreal devastation of that tornado have enforced some priorities for rebuilding and recovery. Restoring gaudy fiberglass signs has been, understandably, low on the list. Inside the store, there’s a frame with a series of photos from the morning after the tornado hit, a sobering and eye-popping reminder of what these good people lived through. I’ll catch the sign again some other time.

I wanted to visit one more barbecue place in Tuscaloosa, and was completely spoiled for choice, because there are plenty. The populist choice would probably have been Archibald’s, which seems to be Dreamland’s principal competitor in the city, but I decided to try the little-known Thomas Rib Shack instead. I’m a big fan of championing the underdog, you know. Plus it seemed to be the furthest place along 43 on my way out of town, that, too. 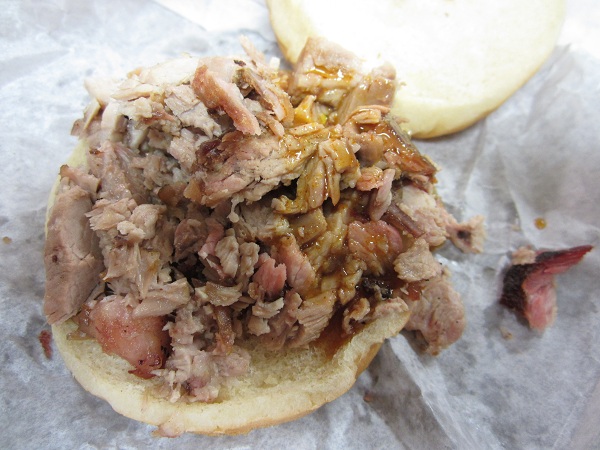 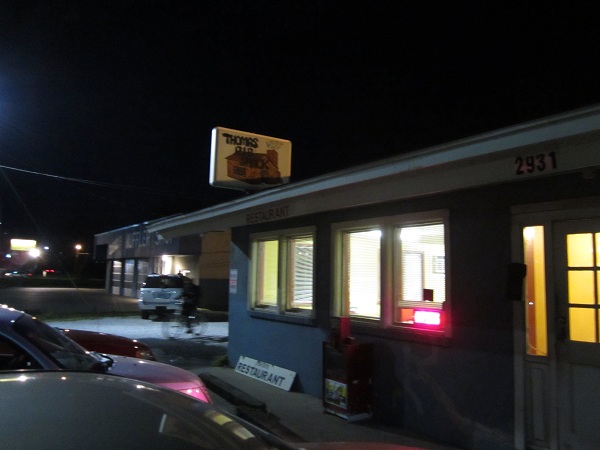 I’ll be charitable and suggest that I might not have visited on a sparkling night. While the staff at Hicks were pleased to welcome me and interested to hear that I found them listed on Urbanspoon, the good people at Thomas were, shall we say, a little more reticent to speak with me. They didn’t seem to understand why I was asking them about their business, which opened in the early 1980s.

Chopped pork is by no means the specialty here. I think to get a better idea of what they can do, ordering ribs or catfish or pan trout would be the key. I did feel a little out of sorts, a traveler in a place that really just serves its neighborhood well and doesn’t ask for, or receive, much attention. I certainly enjoyed the meat, and the sauce, which was reminiscent of Hicks but a little sweeter, but I didn’t have a sense of comfort or warmth. When the time came to leave, I didn’t regret having to do so.

But you know what’s completely ridiculous? My second time in Tuscaloosa stopping to get something to eat, and Taco Casa still overwhelmed the competition!