Shortly after Marie and I started the blog, we took a trip to Tallulah Falls and found our way to a joint called Hawg Wild in Clarkesville. There, I found the first example of white barbecue sauce that I’ve ever seen, went gaga for it and we made tracks for Birmingham as soon as feasible to sample white sauce in its home state. It turns out that even Birmingham is too far south for this very regional delicacy to be common; some of the people that we met during that trip had no idea what we were talking about, but everybody in the avenues and routes around Huntsville and Decatur and some other places are at least familiar with it.

Looking online, then, for some other suggestions, I was recommended (by somebody, somewhere whom I am unable to thank) a place in Hamilton called Buttahachee BBQ, which was said to have the best white sauce anywhere. By coincidence, Marie and I were only a few weeks, then, from visiting her sister in Memphis and the future I-22, which connects Birmingham with Memphis, runs right through Hamilton. Sadly, though, Buttahachee would prove not to be open at the time we would be traveling. Then, they were only open for supper on Saturdays. Time and the economy have actually been a little meaner to this good restaurant since 2010; these days, they’re not open on Saturday at all.

The restaurant, in Marion County, is named for the Buttahachee River, which my route crossed at least twice before I got to the place. It’s a curious location, down a little county road where the scenery is lovely but they sure don’t get any foot traffic. It originally opened in 1998 and closed in 2002. The family decided to give it another go and reopened in 2008. There were a few other people there eating when I arrived shortly before 3, but it was hardly bustling. This, along with the curtailed weekend hours, concerns me, as this is a great little place and should be championed. 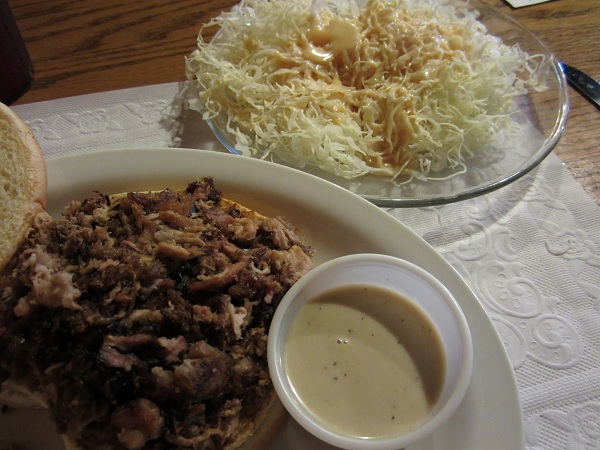 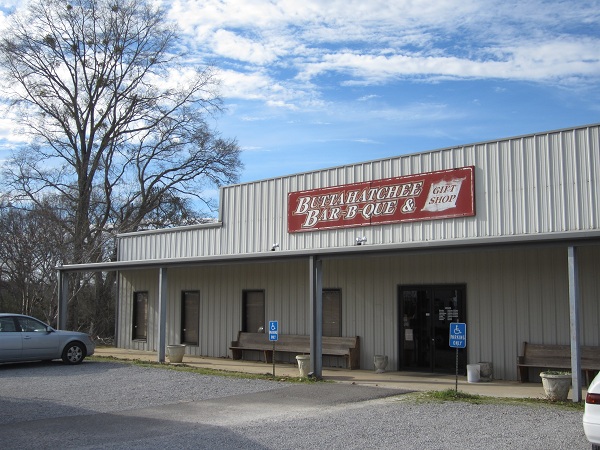 Typically, the sandwiches at both the two Marion County stores that I visited are prepared in the Memphis style, with slaw atop the chopped pork. Here, I asked for it as a separate side order and was very pleasantly surprised by what I received. This is a completely nontraditional slaw, like shredded cabbage with a very thin dressing similar to Thousand Island. It was completely wonderful.

As for the pork, cooked over hickory as much in the area is, it was also a treat. It was very dry and smoky, certainly in the upper tier of the meat that I sampled on the trip. There were no table sauces available, and I passed on their regular sauce, asking just for a cup of the white. It was magnificent, really worth the nearly two-year wait to try it! It mixed just perfectly with the pork, thanks in part to the inclusion of lots of pepper.

Curiously, though, the gentleman with whom I spoke at the register – I didn’t note his name – doesn’t really enjoy their white sauce very much. He told me that he likes to cut it with the regular sauce instead. I wish them the very best of luck and a more robust crowd from the locals, because the next time the road takes me through Hamilton on a weekday, I’m going to have to try that.

Still in Marion County but down the road in the town of Guin, there’s another place with very good white sauce, but I wouldn’t even think of cutting it with their regular brown sauce, because this is a case of pretty good meat that doesn’t deserve to be mistreated with sauce so underwhelming. 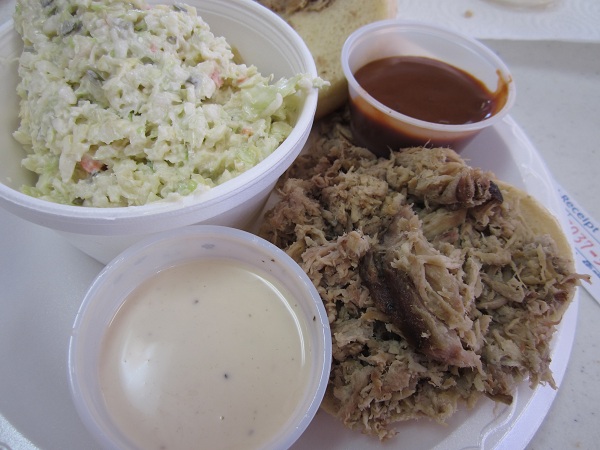 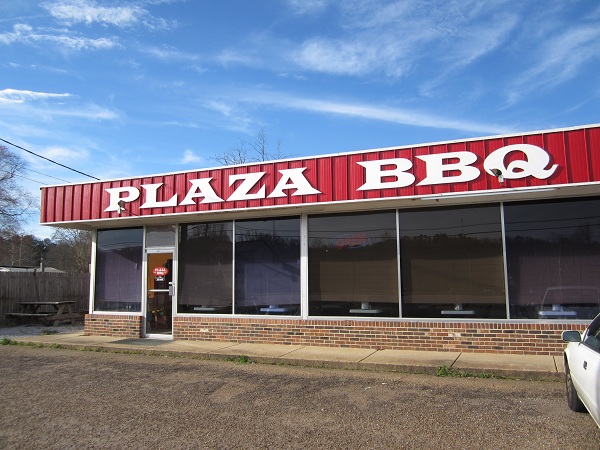 As you see in the photo above, that sauce has a pretty unmistakable look to it. One of the staffers confessed that the owner, Gene Webb, developed his recipe by piggy-backing onto an existing sauce. She wouldn’t name it, but if it’s not Heinz 57 with a little ketchup and pepper, then you can yourself make a complete clone of Plaza’s concoction at home using those three ingredients. I don’t know why Gene does this. He takes a perfectly good Boston butt, smoked well over hickory and oak – the only restaurant on the trip to admit to making this cost-cutting change – and then offers this goop with it?

It’s a real shame, as Plaza, which occupies the building that was once home to Coleman’s BBQ, is otherwise a fine little restaurant. The meat tastes great, the yellow-tinged slaw is very tasty and their white sauce is also very good. The restaurant is well known in the area as serving the best livers and gizzards around.

I shouldn’t tease, as I did not get to meet Gene Webb, but I got a cackle at the good-natured note presented by an area council awarding him the annual community “Scrooge” award, and his employees joked without worry that he certainly deserves it. Perhaps that explains the goopy Frankenstein sauce? Well, I recall that the original Scrooge saw the light in the end. Perhaps he’ll get to work on something that doesn’t taste like it was mixed from three things off the Sysco truck and give his pretty good restaurant some really good character sometime.

I had to ask about the next town on the route. The staffers had a lot of praise for their local high school, which won the state 1A championship in football this season, and whose basketball team is on track for similar glories. But community pride can only go so far when, in between the towns of Guin and Winfield, you have there a teeny little place with the flatly silly name of Gu-Win, apparently because somebody once couldn’t make up their mind which of the two towns around them was the better. I had a long drive through all three and then a lot of flat nothing to get through before reaching Tuscaloosa as the sun started going down.

One thought on “Circumnavigating Alabama – Part 2”