Back before Christmas, Marie mentioned that she’d be taking the baby for a trip to visit her family in early February, just the two of them. I realized that we could each have road trips. Sadly, the interference of the real world meant that we did this on different weekends, but she got her trip and I got mine, and we are quite satisfied with the results.

I decided to “circumnavigate Alabama” and try to visit restaurants all around the state, most of which, I believe, have never been featured by any other blogger. There is a notion that most of our barbecue in Georgia, especially the older joints, is considered Memphis-by-way-of-Alabama style, but I decided to see what that really means. For the most part, this seems to mean pork shoulder cooked over hickory and served with a thick and sweet brown sauce. Quite a few Georgia shacks that Marie and I have visited recently have told us that with the rising cost of hickory wood, they have begun the switch over to oak. Of the dozen barbecue places that I visited in Alabama, however, only one admitted to making the transition to oak.

I only had two specific barbecue destinations: the very famous Brick Pit in Mobile, and Buttahachee in Hamilton. This is a place that I had wanted to visit in 2010 as we drove through the area on the way to Memphis, but, well, more about that in tomorrow’s chapter. Every other place that I charted came from tracing the route and letting Urbanspoon find me a joint along the way. In many cases, I seem to be the first person to photograph and write up the restaurant for posterity.

This is by no means an exhaustive story of the food along my path. In part seven, I’ll list more than a dozen more places where I could have stopped that I saw along the way, if I wasn’t stuffed to the nines already or if I had more money. Nor was this the most comprehensive route that I could have taken. With a third day and a deeper budget, I would have spent a little more time in south Alabama, and taken a road through Andalusia, Enterprise and Opp, stayed the night in Dothan, and then come up US-231 to Montgomery. The reason that I didn’t go to Dothan was that I figured, wrongly, the best way back from there was US-431 through Eufaula and Phenix City, areas that Marie and I have covered in previous chapters. On that note, I did not find any evidence that the eastern Alabama style of thinly-chipped meat and thin mustard sauce as seen in that region has made any inroads anywhere else in the state. I would like to spend more time in Auburn and Opelika sometime, though.

So this trip took me to three of Alabama’s six major metro areas and saw stops in some very neat towns, but it avoided Birmingham, the state’s largest city and one that we have visited a few times before, completely. Huntsville will, ideally, be getting its own stop very shortly, while poor Dothan is just languishing unloved a million miles away from anywhere that we ever visit. Maybe the Houston County chamber of commerce will fly us down there for a few days of goodwill. I’m sure that our many readers would love to hear what we would find.

The only stretch of road that I drove twice on the trip was I-20 in Georgia. I took the interstate out west to Villa Rica, and then took US-278 through Rockmart and Cedartown. I entered Alabama with a red Chevy pickup tailgating me for at least ten miles and, gracelessly, avoiding about a dozen opportunities to pass me. On 278, I drove past four churches and two (closed) fireworks stores before seeing my first house. A Family Dollar was not far behind. Alabama has hundreds of these stores. I passed through Piedmont and made my way to Hokes Bluff for the first stop on the trip, a little converted house where the owner had been serving some very good barbecue for two years before she first tasted it. 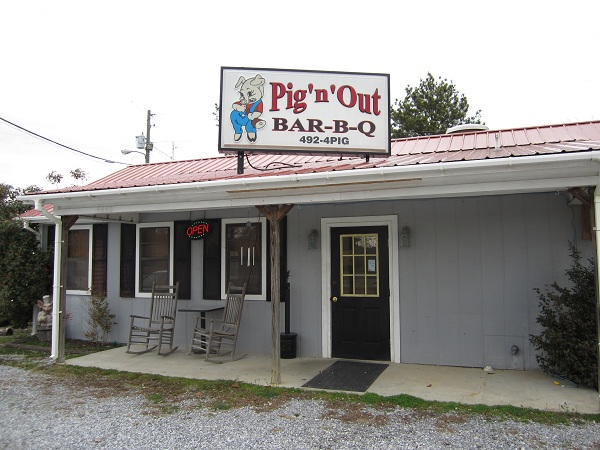 Carly Grace purchased Pig-N-Out from the original owner, Drew Gasoway. He opened the restaurant, armed with a secret sauce recipe given to him by a little old lady in Florida, in 1996. Gasoway still lives and works in the area, but is no longer in the restaurant business. Carly, a former waitress at his store, bought it from him, but, as a vegetarian, had no idea what her pork shoulder, smoked for twelve hours over hickory, tasted like! It took her two years to finally succumb to the tempting smell and the honest reality that she probably should know the taste of the food that she’s serving. That the resulting meat is so darn good given such a curious pedigree might be quite a surprise to readers. She didn’t mention it until I’d already finished my sandwich and decided that I liked it a good deal. This would, in fact, prove to be among the three or four best of the dozen barbecue stops on the trip, and the sauce one of the most interesting.

While Carly was, naturally, tight-lipped about the secrets of the sauce, she did let me know that it has sixteen ingredients and that a gallon-and-a-half batch takes three hours to cook in a very weird pot that’s akin to a double-boiler. It is a red, tomato-based sauce that’s smooth and not sticky, with an incredibly agreeable, warm taste. I suspect that she serves even more of it in the fall, when Pig-N-Out sells sandwiches at Hokes Bluff High School football games, but she has some catering orders all throughout the year. She mentioned that she does business with a department at a nearby Goodyear plant – possibly the one that I drove past in Gadsden a few minutes later – and that she’s had a long-running and amusing feud with one fellow there who will not try her pork, on account of his firm conviction that he need not bother trying it, as no “little white girl” knows how to smoke barbecue. I’d love to know who the heck he thinks does it better, because I ate a heck of a lot of barbecue all around the state this weekend, and Carly’s was one of the very best.

Carly said that she doesn’t sample other people’s barbecue, but she made an exception a couple of years ago when she was traveling through the town of Decatur and stopped by the eight hundred pound gorilla of northern Alabama ‘cue, Big Bob Gibson’s place. The general feeling among all and sundry is that Gibson chose to sacrifice quality for notoreity; everybody says that his is nowhere as good as it once was, but Gibson deserves a round of thanks for popularizing the region’s white sauce and bringing it to national attention via his TV appearances with Paula Deen. Pig-N-Out doesn’t offer a white sauce, but the next three stops on my tour did. The first of these was about sixty miles west in Cullman, a town that I’d never heard of until I started playing Where’s George. There’s a well-known and much-loved player who lives here and who stamps a huge number of bills for the game. I started kicking myself as I drove along for not dropping him a line and asking whether he’d like to meet me for lunch at Johnny’s Bar-B-Q. 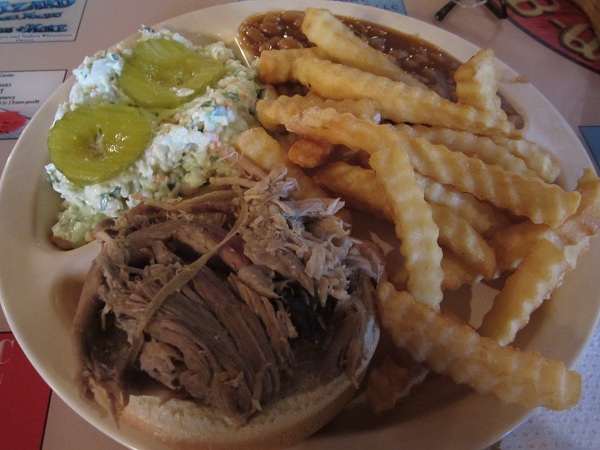 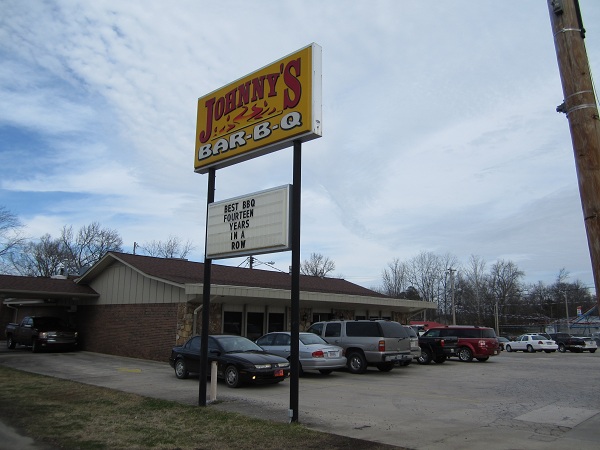 I believe that Johnny’s is the oldest barbecue business that I visited on the trip. It was started by Johnny Graves in 1949, and he sold it to Troy Wiggins in 1963. Today, the business is co-owned by Troy’s son Gary and his nephew Ron Dunn, who told me a little about the place’s history.

It was also the most packed of any restaurant that I saw on the trip. In fairness, I was usually eating at oddball hours along the drive, and this was the only place I saw at peak time, but Johnny’s was completely crowded during the Friday noon hour, and other restaurants miles away had heard of them. It’s a very popular place, with prices so low that I could stay under budget here and sample several of their sides. A sandwich plate with slaw, beans, and fries came to just seven dollars and change.

The only sauce on the table is a red sauce, which is glow-in-the-dark bright and very sweet, but they also do a white sauce here which was easily a solid second best among the four that I got to try. It complemented the meat very well, and I could certainly see myself eating here again if I was ever in the area. It isn’t on the table, but available if you ask.

Now, northern Alabama is home to more than just the white sauce and Golden Flake potato chips, which were also fairly represented at Johnny’s with a sales and display rack about the width of a living room wall. It’s also home to the Jack’s fast food chain. I have written about Jack’s before when I stopped by one of their three stores in west Georgia.

We hear a lot of talk in the restaurant hobby about places planning to blanket Atlanta with multiple locations. El Pollo Loco and Fatburger made the claim, sputtered and failed. Genghis Grill is in the process of burning out. Del Taco and Lime Mexican Grill are both talking big and starting slow. I would strongly advise the marketing directors of these firms to drive around northern Alabama and see what Jack’s has done. Get off the interstate and try an old US highway like 278. Friday morning, if I drove past fewer than fifteen Jack’s, I’d be surprised. Piedmont, Hokes Bluff, Gadsden, Snead, Cullman, any plot where it makes any logical sense to place a fast food restaurant, there’s a Jack’s.

These do more than just provide a place for a quick meal for the community; coupled with billboards, they reinforce traveler’s desires to stop. I had no time or room for a fast food burger and fries, and my eyes and mind tune out national chains, but I saw every one of those Jack’s, and before I got to Johnny’s Bar-B-Q, I was just about ready to pull over for a milkshake. I only beat the temptation for a short time by telling myself to wait until after I’d stopped at Johnny’s, and I could have a small shake for dessert at the next Jack’s that I found. This came in the town of Double Springs and I enjoyed the treat of several sips of a shake made with Blue Bell ice cream. No, I didn’t finish it; I didn’t need the half that I did drink, but it sure was tasty, and the staff was doing a good job. Jack’s has been around for more than fifty years, barely leaving their home base but doing their communities right. As I’ve said before, their food is nothing special, and probably identical to Burger King, but I like the company all the same.

That said, sipping down those calories while walking back to my car, I saw that I was across the street from another barbecue joint. Had to curl my lip just a little there. Part of me wanted to visit, but I was also already a little behind schedule and there was much, much more eating to come.