FLASHBACK: As our regular readers may recall, about every eight or nine months, I take a little road trip by myself. In an amusing coincidence, on the first three of these “circumnavigations,” it was the business located furthest away from Atlanta that served up my favorite of all the barbecue that I enjoyed. The third trip found me visiting the Quad Cities in northwest Alabama for the first time, and it was there that I discovered Brooks Barbeque, a downright amazing little place that serves up some killer pork and mustard slaw.

The problem, of course, was finding some reason to bring Marie and the kids the 220 miles from our house to Muscle Shoals so that they could marvel at this meal, too. That opportunity presented itself at last when we were invited to participate in Florence Restaurant Week – about which more in tomorrow’s chapter – and while I was looking forward to digging in to some of the featured restaurants, I was looking forward to that epic meal that I promised myself last year every bit as much.

We left about 7.40 our time. The drive to Muscle Shoals takes about four hours, using GA-113 through south Bartow County to Rockmart, and then US-278 around Cedartown, into Alabama and then through Piedmont, Hokes Bluff, Gadsden, and Cullman. This turned out to be part of the same route that my first “circumnavigation,” in 2012, took, and so I could point out Pig-n-Out Bar-B-Q, the first stop on that trip, as we drove past it. (This route, for those of you who enjoy playing punch buggy with your family, takes you past a house with about eleven rusting hippie vans and classic bugs in the yard. Points galore.)

After a couple of short Baby Mercy Breaks as we drove north on AL-157, we arrived at Brooks Barbeque at 11.15, right before the crowd lined up. Most of the business here is for take-out, with only four rickety tables. Everybody comes here for lunch, because it is downright amazing. 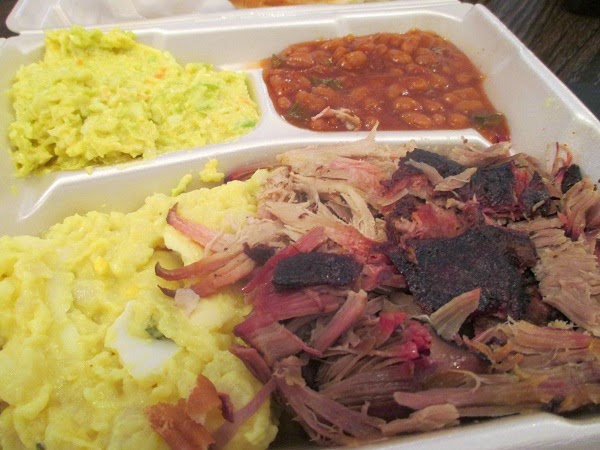 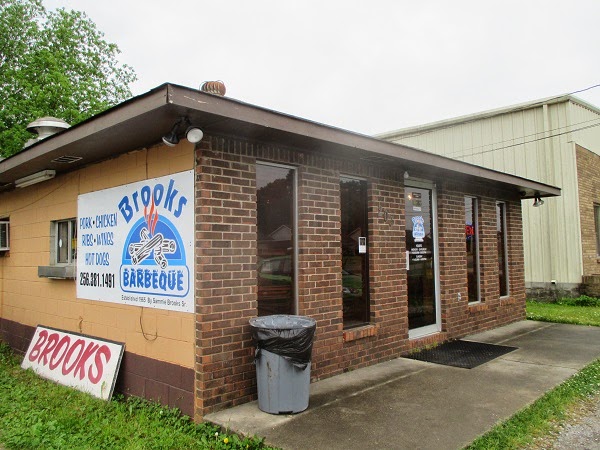 Last time, I had a sandwich with the slaw on the side and a cup of baked beans. This time, I ordered a plate. This is a steal – it’s a giant pile of pork with slaw, beans, potato salad, and bread for under eight dollars. The girlchild and Marie each had sandwiches, which come with a heap of the slaw atop the pork – madly, the girlchild drew a line in the sand on the subject of the slaw, because she doesn’t like mustard – and cups of beans, and we got a hot dog for the toddler.

There’s nothing better than bringing people to one of your favorite places and seeing them love it almost as much as you do. This meat – it is smoked in a fireplace room behind the dining area and chopped to order – is just perfect. It’s somewhat dry with just enough juice there to notice. The hot sauce is thin, blood-red, a good tomato-vinegar-pepper blend. I’d like to bring home a bucket of the stuff. Before the weekend was out, we’d have some more mustard slaw that was just about as good, but the meat is in a class by itself. The beans are quite spicy and just a little sweet. Marie agreed that they were good, but too spicy for her taste. That’s fine by me, I said, dumping them into my tray. The potato salad is excellent, but I only sampled a few bites of those before we switched sides.

Brooks Barbeque is still family-owned and proudly local. They moved to the present facility in 1985; for the first twenty years, the restaurant was located on Morris Avenue. Mary Ann Brooks Banksden, daughter of Sammie Sr. and Lucille Brooks, co-owns the business with her sister Christina Brooks McCants and Christina’s son Lonzie (Trey) McCants III, along with her daughter, Lanndrea Banksden. Lanndrea and I had exchanged emails after my previous visit, and when the employee working the register recognized me – no great task, I was the one breathlessly praising the place and hollering “I had to bring my family after I ate here ten months ago!” because I’m such a grown-up food critic – she let Lanndrea know that we were here. She took a break from the pit room and kitchen to thank us for returning. These are sweet people. We left very happy.

The great state of Alabama – every state calls itself “great,” but I kind of love the way it sounds when attached to Alabama – can boast some of the very best barbecue in the country. It’s an awful shame that we lost Goal Post in Anniston late last year, but I’d happily rank Brooks alongside Brick Pit in Mobile as the two best barbecue restaurants in the state, and top ten in the country. I know Florence and Muscle Shoals can be a haul without any of those convenient interstate highways going anywhere nearby. Hopefully, if this praise alone isn’t enough to send you that direction, the next week and a half of posts will do it. Stay tuned, because this was a neat trip.