Coming into Alabama on US-72, there are four large towns which are referred to as either the Quad Cities or The Shoals: Florence, Tuscumbia, Sheffield, and Muscle Shoals. As I entered Tuscumbia, I noticed that the Alabama Music Hall of Fame – it’s still open to the public, unlike Georgia’s – counts Buffalo Rock among its sponsors. I reminded myself to find a grocery store and bring home a twelve-pack, and promptly forgot. I remembered when I got home and recounted the trip to my family, slapped myself in the head, stood up and said “I’ll be back in three and a half hours…”

In fact, something happened just a few minutes after telling my story that very nearly did have me returning to Alabama in a fit of pique. But more about that in a minute.

After I checked in to my motel, I hurried to my final destination of the evening, Brooks Barbecue in Muscle Shoals, which would close for the evening at eight. Holy anna, was it ever amazing. I had two very good meals waiting for me on day two, and a couple of other memorable ones, and some good experiences already that day as well, but Brooks was the runaway winner of the trip. Last week, I mentioned how Southern Smoq in Flowery Branch, Georgia, had knocked me on my rear end in surprise. This was even more amazing, and, again, from a business that I’d never heard of before I started looking for something to eat in the Shoals. 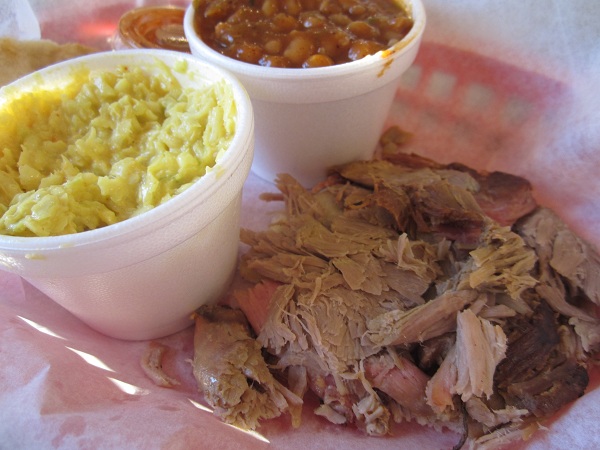 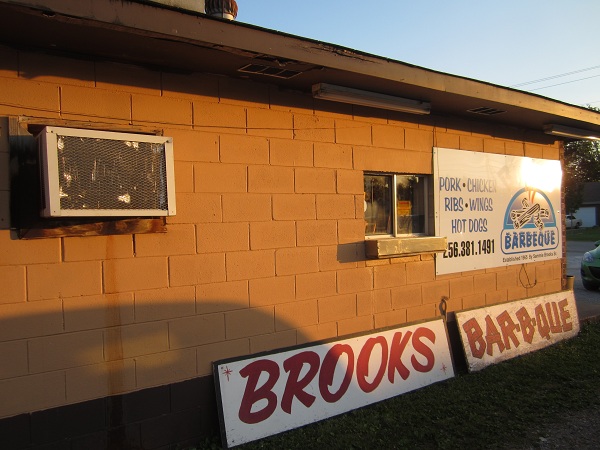 Where to start? Well, I just asked for a sandwich with the slaw on the side, and a cup of baked beans. Okay. The meat is cooked over oak in a cramped fireplace room in the back of the building and given a gentle rub of some spices, and it is completely remarkable. It’s served with mustard slaw – punch the air!! – which nearly had me falling off my seat. And I don’t know what all spices they drizzle over those beans, but you’ve never had better, anywhere.

They also serve hot dogs. Two fellows in Auburn colors came in to wait for an order they’d phoned in earlier and asked to add a slaw dog. “Oh, my heaven, this mustard slaw on a hot dog? I’d about die,” I said. “Oh, it’s real good. Better than you can imagine.” My stomach protested at the notion. This was the seventh restaurant of the day. More would come tomorrow. If I am ever in this town again, I am going to have an epic, epic meal here.

Then I cracked the little one-ounce cup of fire: a downright mean, dark and thin brew of pepper and vinegar. It made the meat so happy. I finished the slaw and beans before drowning the rest of the pork and letting my last tastes of the day be this. Great heavens. When can I get back to Muscle Shoals?

I enjoyed talking with two of the employees for a few minutes before making my way. They explained that Sammie Brooks Sr. opened the restaurant in 1965, and that somebody in his family, Marvin, runs it today. They were the most pleasant and friendly people that anybody in my line of work could hope to speak with, but it was closing time and I needed to let them get to their final chores.

I enjoyed driving around Muscle Shoals, spending a little time letting my food settle as the sunlight faded. I saw FAME Recording Studios, and also the town’s little outpost of the curious Waterwheel chain, which I first spotted in Georgia about a year ago. I almost stopped by for a milkshake to keep in my hotel room’s fridge for overnight sipping, but I remembered that I owed Jack’s a little business after my shameful “pit-stop-and-run” activity earlier in the afternoon. So I drove across the glorious O’Neal Bridge that connects Florence to the other cities and, as the sun went down, popped by the Jack’s on US-72 for what turned out to be a remarkably good peach milkshake, easily as good or better as any available from any of Jack’s corporate rivals, and retired for the night. I copied all the images off my camera and resized the best of them until I got sleepy.

I won’t burden you readers with an account of my hotel experience. Suffice it to say that Expedia made me unhappy, and I’m using some different service in the future.

The next morning, I started out a little before nine. I first went to look at this very interesting football stadium. It’s used by the University of North Alabama and every year it hosts the Division II championship, won most recently by Valdosta State over Winston-Salem. It’s on the campus of a middle school, which just strikes me as downright odd. Nice stadium, mind, and the UNA campus is lovely.

I then drove downtown and paid for parking – ten cents an hour, thank you, Florence! – and stopped into an ice cream parlor called Trowbridge’s to take some photos. I decided against budgeting for this stop, but when I saw Chopped Onion’s page about Trowbridge’s, which opened in 1918, I knew that I wanted to at least see and photograph it.

You’ll note that there are no pictures of Trowbridge’s here, however. That’s because, as I learned when I got home and finished telling my story to my family, my SD card started dying sometime between Thursday night and Friday morning. I took 143 pictures on Friday, and none were available. I was devastated. Fortunately, the fourth (fourth!) data recovery program that I downloaded on Saturday rescued 39 of the 143, so I have some visual record of every other place that I visited except for Trowbridge’s, even if most of the photos you will see across these last parts are the pictures that I’d normally discard as not being good enough.

I usually snap between a dozen and twenty pictures at each restaurant that we visit. The two below, of Bunyan’s on College Avenue near the hospital, are two of the only three that made it back from the card of this old establishment. 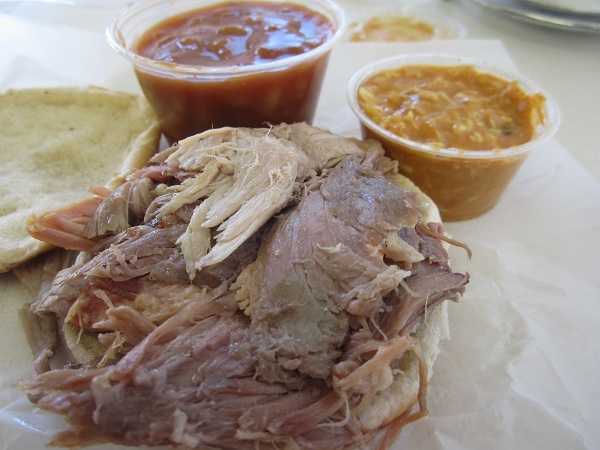 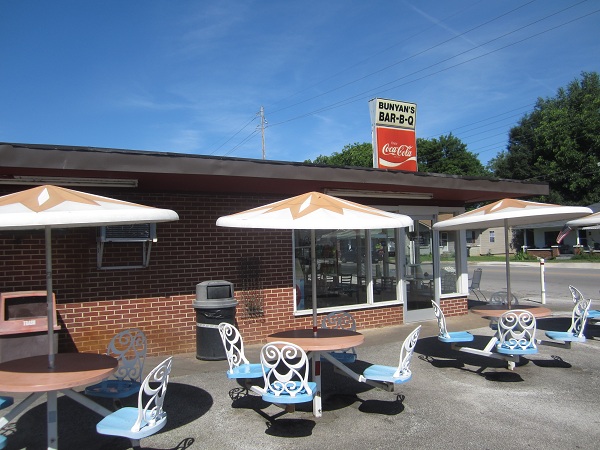 Bunyan’s, which our friend Helen strongly recommended, opened in 1972. I spoke very briefly with the owner, John Cole, when he arrived, and that was very nearly the extent of my communications with anybody at this old place. I asked the fellow working the pit how long the business had been open. “Long time,” he said. That was all.

My experience is echoed by commenters at Urbanspoon, who seem to agree that while these people are serving up some pretty good barbecue, and some unbelievably good hot slaw to accompany it, they just aren’t very talkative. I was the first guest when they opened at ten, and the business was as quiet as a crypt and not just a little unnerving. My thanks to the ladies who served me was met with a polite smile and a nod of the head from one and disinterested glances from the others.

Perhaps the next time, I’ll take my meal outside, where I can at least hear the sounds of birds and traffic. No, that’s not right. The next time I’m in this area, I’m eating my weight at Brooks’ place and entering a food coma. Bunyan’s is certainly good, but not even in the same ballpark.