Well, I can’t say that I was not warned. Let’s just put that on the table.

So, some years back, as my interest in regionally specific cooking began to grow, I read John T. Edge’s excellent and breezy Hamburger & Fries, a cute little book that talked about green chile burgers in New Mexico and steamed burgers in Connecticut and pimento cheeseburgers in South Carolina – those I know darn well – and something called slugburgers in upper northeast Mississippi. Now, New Mexico and Connecticut are pretty far outside our realistic travel radius, but Mississippi sounded doable.

So, in 2011, we packed up the kids – the baby was a newborn – and drove out to visit Marie’s brother in Starkville. Slugburgers were on my mind, but we were a hundred miles south of their central point – Corinth – and fifty miles south of the extreme edge of the slugburger world. You can evidently get them in Tupelo at Johnnie’s Drive-In, according to this report by Jason Wester, but by the time you get to Starkville, common sense has prevailed.

So, just so we’re clear – I caused a little confusion on Twitter when I mentioned them – slugburgers are an odd throwback recipe from a time when beef was more difficult and expensive to obtain. Starting with the rationing in World War One and following through the poverty of the Great Depression and continuing through the rationing of the next World War, beef was expensive and the country was full of kitchens that needed to stretch a dollar. Whether in the home or at a lunch counter, an all-beef hamburger became a delicacy, and so cooks found ways to extend the meat. In this particular region, the solution was mixing a little beef in with soy flour. The resulting crispy and greasy “counterfeit” patty sold for a nickel instead of a dime.

Slugburgers are probably sold at lots of places in Corinth, but the best known are Borroum’s Drug Store, which has the edge in most people’s opinions along with a proper old-style hand-mixed soda fountain, and the White Trolley Cafe. Unfortunately, Borroum’s closes after lunch and I would be arriving in the late afternoon, so I picked the White Trolley. Actually, I could have easily stopped in Tennessee. As I made my way down US-45, I spotted a ramshackle building with an A-1 portable sign out front that simply read “Slugburgers. All day breakfast.” Or, according to Wester, I could have stopped at Pat’s Cafe in Selmer for one. There are plenty of places that still grill these, 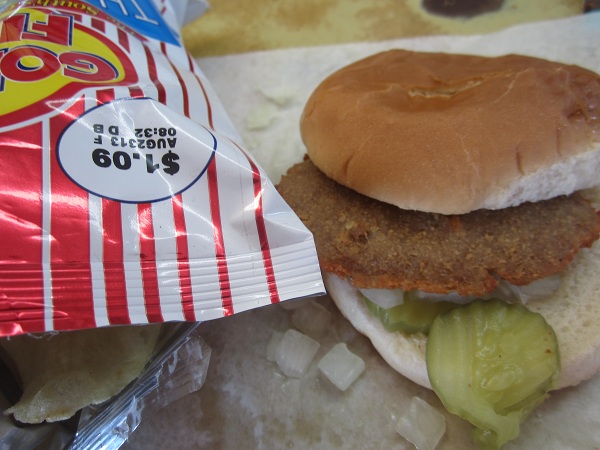 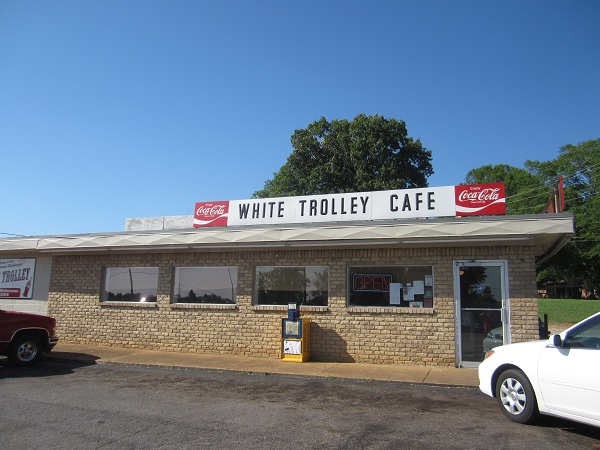 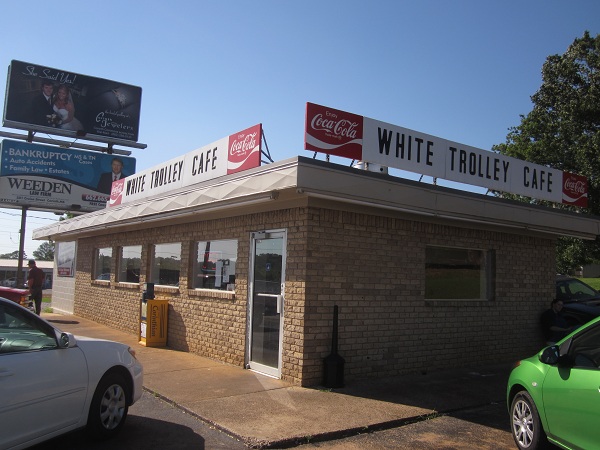 Inflation has meant that you can’t get a slugburger for anything like a nickel anymore, but they’re still priced accordingly. At the White Trolley, a beef burger costs $1.50, and a slugburger is 85 cents. Add a bag of Golden Flake chips and a Coke and I was awesomely under budget for this stop, and left a more-generous-than-usual tip.

So, now that I’ve finally tried one of these silly things after almost three years, what did I think? Well, if you check the actual words that Edge wrote in Hamburger & Fries, you’ll see that over the course of three days in and around Corinth and Booneville, he tried slugburgers at thirteen different establishments and did not enjoy a one of them. A slugburger is typically dressed with mustard, onions, and pickles, and it tasted like a crunchy, greasy oddly-flavored disk covered with mustard, onions, and pickles. I found myself incredibly thankful that I only wasted 85 cents on that thing.

On the wall behind the register, there’s a certificate of thanks from Mrs. Sullivan’s Pies commemorating the White Trolley’s owners, Ronnie and Debra Dease, for their interesting accomplishment. The White Trolley can claim the highest sales of their pies per square foot of any restaurant in the country.

Should the road ever take us back to Corinth, I’d like to get a hand-mixed cola from Borroum’s. Or if we make it to Tupelo, Johnnie’s Drive-In is a must. If Marie happens to be with me, and I sincerely hope that she is, I’ll probably recommend that she order a slugburger. It would be silly to go all that way and not be able to say that you’d at least tried one.

Having already done that, however, I am quite finished with the awful things.