After I enjoyed the really good pork at Chuck Wagon in Fayetteville, I continued west on US-64 for the next few hours. I crossed I-65 and made it into the town of Lawrenceburg, where the actor and politician Fred Thompson was born. There’s a big and faded sign with Thompson’s photo on it as you come into town. Local ne’er-do-wells have defaced it, giving him an impressive 19th Century head of hair, a swirling and thick mustache and beard somewhere between “Confederate general” and “grizzled prospector.” Give the vandals points for originality; kids in my hometown would have been satisfied with some sunglasses.

Lawrenceburg is the home of Big John’s Pit Bar-B-Q, which John Norris opened in 1968. The manager on duty believed that it had always been in this location, a nondescript fast food place that was easily repurposed for this business. Directly behind the building is another that houses the catering and sauce mixing. It reminded me of the way that Shealy’s in Batesburg-Leesville, South Carolina ran out of room indoors for their sauce manufacturing and expanded to a building next door.

I was considering what to get as a side with my sandwich and was spoiled for choice. I didn’t see stew on the menu of course – you very rarely do in the central time zone – but my heart leapt when I saw three different types of slaw: mayo, vinegar, and, by far my favorite, mustard slaw. Sadly, I was about a month too late, and they had not updated the menu. The manager explained that they started offering mustard slaw last spring, and it was very popular at first but it trailed off quickly. They finally stopped making it, leaving me to enjoy some baked beans instead. 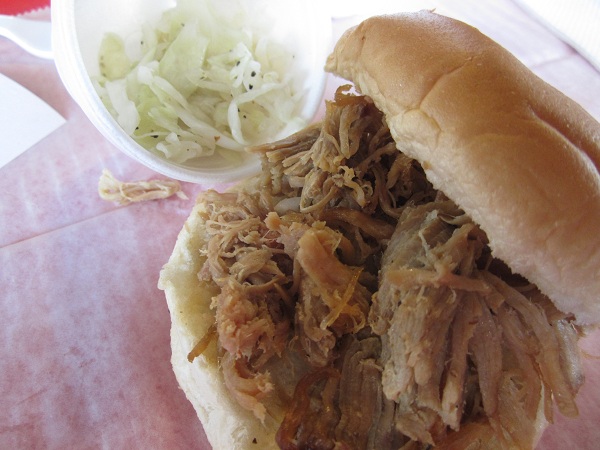 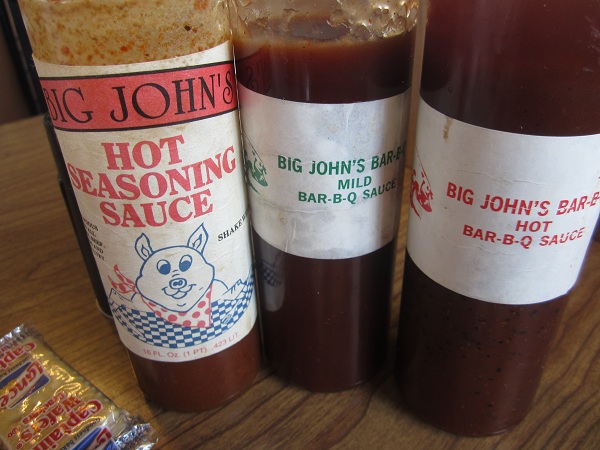 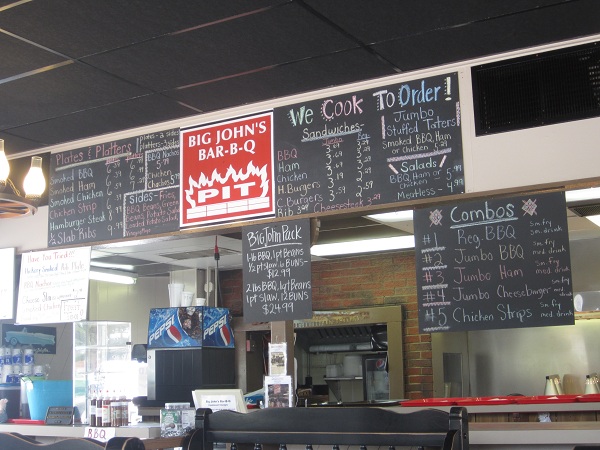 I felt good and I was doing well after four stops. Clenched my fists and took a very short walk to the end of the block and back, drove back down to 64, filled the gas tank and headed west again. After about an hour, I needed to make a pit stop and entered the town of Savannah. I saw a Jack’s ahead on the left. I’ve written about this curious fast food chain a couple of times before (short version: it’s based in north Alabama with small inroads into the neighboring states, serving food about as reliably average as every other fast food joint from an eyebrow-raising 140 locations), and figured that I’d break into my own mad money (outside the circumnavigation budget) for a milkshake. Then I noticed there was a Sonic Drive-In across the street and figured I’d rather have a lime slush, especially what with it being half-priced happy hour. So yeah, Jack’s, I became that guy who used your facilities and left without buying anything. I resolved to make it up to Jack’s before I went home. Also, the lime slush at Sonic was terrific. Sorry. 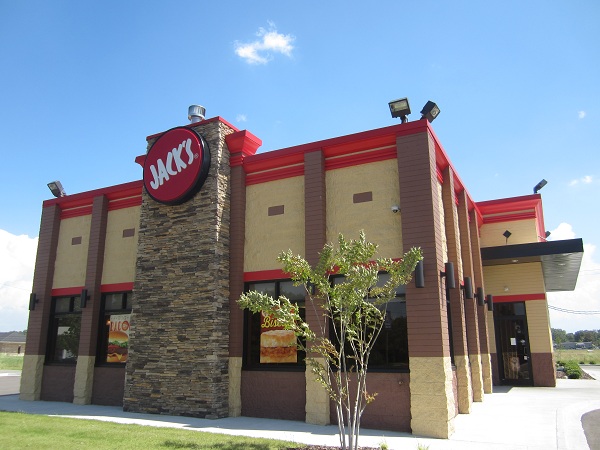 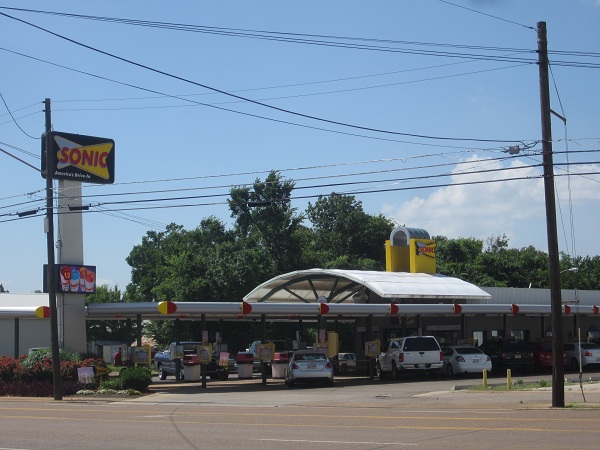 US-64 continued westward, a dull, dull drive through Sheriff Buford Pusser’s old stomping grounds – I watched my speed for about three miles, yes – and my second pass over the Tennessee River. I made it to Selmer and went south on US-45, finding my second barbecue place called John’s of the afternoon. This is Pappy John’s, between Selmer and Eastview, and I pulled into their gravel lot at 3:55.

This is another place with a pretty long lineage. It originally opened in 1978, and it’s run today by Pappy’s son, Kenneth Luck. This was only the second time – and, hopefully, the last – that I visited a place that has also been visited by Chopped Onion and did not enjoy it. I had not really noticed his 2011 review before; unlike May’s visit to White Diamond in Bonaire, Georgia, I did not plan for Pappy John’s based on this site, but based on what was convenient in the town of Selmer. 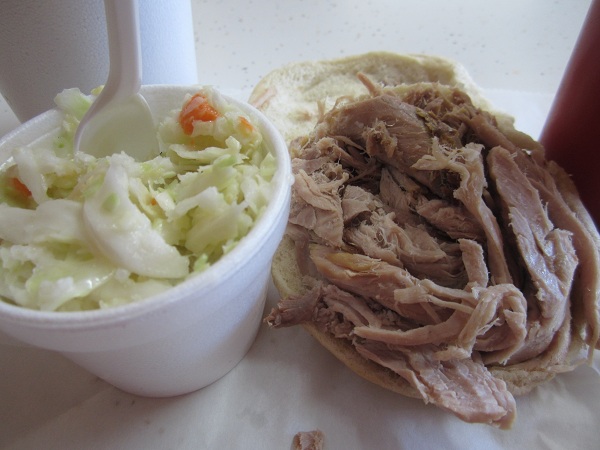 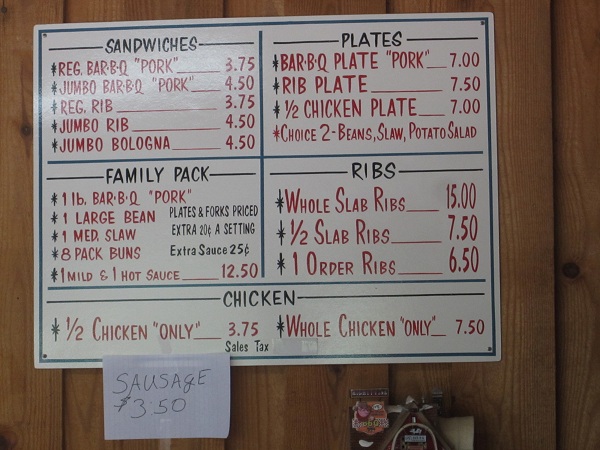 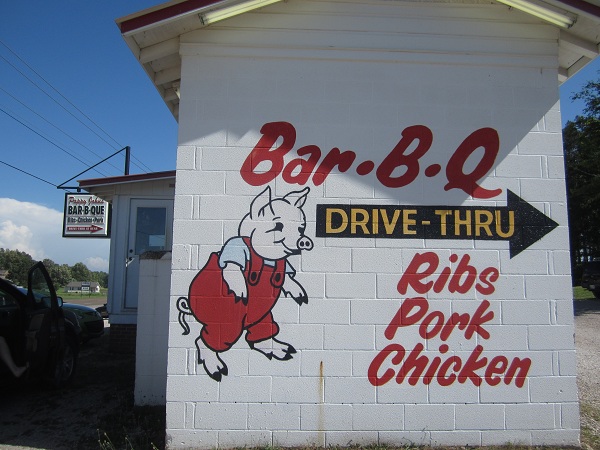 Before I left on the trip, I read the first couple of chapters of Barbecue Crossroads by Robb Walsh. I resumed the book when I got home and got to a lengthy discussion about how many restaurants, in an effort to save cash and stay afloat, have made the decision to switch to electric smokers with some wood coals. That, perhaps, accounts for what I found at Pappy John’s. As I ordered my sandwich with the slaw on the side, the ladies behind the counter opened the door to the pit and I saw the hams inside bathing in the unnatural red glow of sun lamps.

After reading Walsh’s work, I’m a little more generous to Pappy John’s than I was. I have always comprehended that this is a tough business, and that it never gets any easier. But the uncomfortable reality is that whatever the cooking method, this meat was unbelievably bland and dry. I drowned it in hot sauce and it was still too dry. I scooped the slaw from the side cup back over the meat and it was still too dry. I discreetly threw away the rest of the sandwich.

I tried to make a little polite conversation with the ladies behind the counter and saw something else that I’d never seen before. The sauce that I’d poured over my meat was not the restaurant’s own. There were several big jugs of Briggs brand barbecue sauce stored within arm’s reach. You can draw your own conclusions about whether a barbecue restaurant that doesn’t even make its own sauce is worth a stop. Not being really all that familiar with the food supply industry beyond wishing everything was homemade and taking the snobbish food blogger approach of dismissing whatever isn’t, I can’t swear that I had ever seen the Briggs brand before, but I saw it again the next day in Athens, Alabama on a coffee pot. Turns out that this is a food supply company based in Corinth, Mississippi.

By chance, Corinth was my next stop. A slugburger was waiting for me.