I’ve driven between Chattanooga and Nashville dozens of times climbing up and down the mountain through Monteagle, but until this trip, I had not gone down the southwest side, following US-41A. In the spring of 2012, we used US-41 down the north slope to Manchester, but this was all new to me. Taking US-41A west-southwest to Winchester will take you first past the campus of the oddly-named Sewanee: The University of the South before dipping down the mountain’s western side through a beautiful and gentle series of curves and twists. The highway then rolls through the town of Cowan before finding Winchester and winding north again.

Winchester was the birthplace of TV personality Dinah Shore, and the city named a stretch of US-64 after her. It is also the location of my second stop of the trip, a fairly new restaurant called John T’s BBQ. R.L. Hawkersmith opened the nice place in 2010 in a very old building, constructed in 1875, which had most recently been home to a jewelry store. The John T of the name was his father, commemorated with a black-and-white photo that appears on the walls and on the sauce bottles. 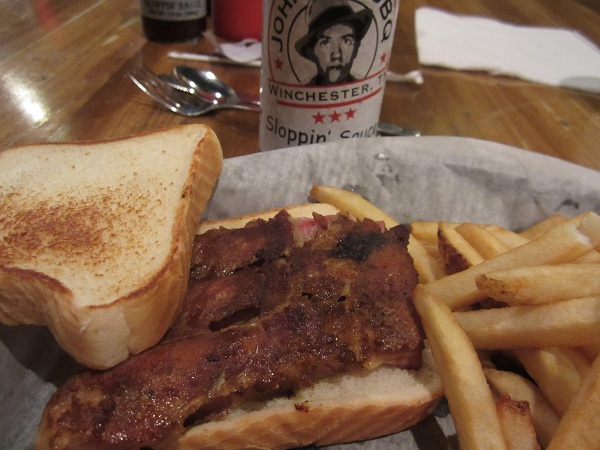 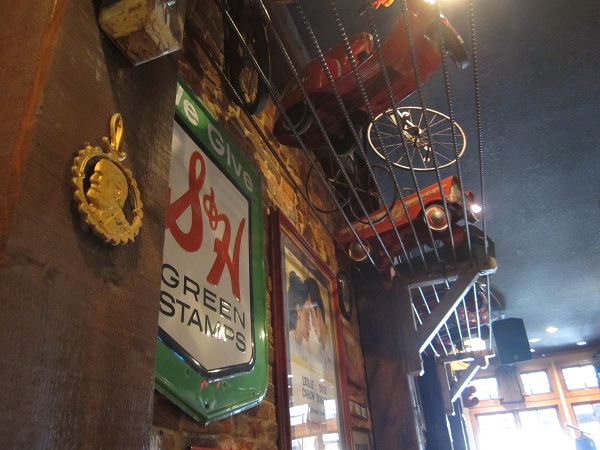 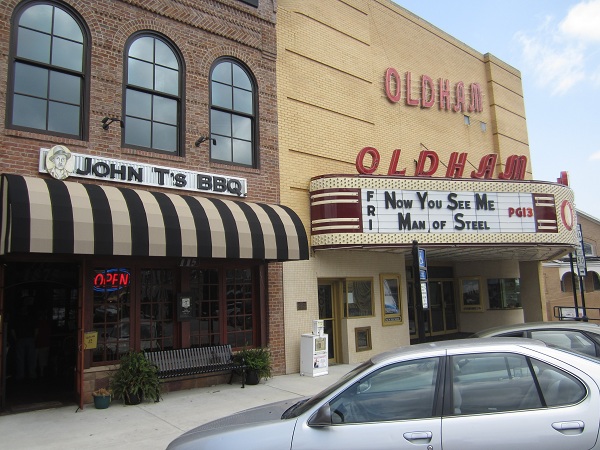 The food here is pretty tasty. If you recall the previous chapter, you may remember that I was happy to scrimp and save a little bit on the first stop of the tour at the server’s recommendation. Here, my server was very emphatic about the quality of the baby back ribs, which the owner told me were grilled for five hours over a mix of fruit woods, so I tried those as a sandwich with some hand-cut fries.

I won’t even imply that this restaurant did anything wrong, but this was not the meal that I was looking for. The road would offer many more examples of old and homemade treats over the next two days. This place just felt a little too corporate for my taste. I suppose that it is fine for what it is, but I left thinking that it’s not a great deal different than a locally-owned variant on a Jim & Nick’s or such. Looking at the ingredients on the ready-for-store-shelves sauce bottle and seeing that the very first one was high fructose corn syrup didn’t dissuade me. I was more impressed by the treats and things lining the walls than I was the food. The owner has built up a museum of well-cared-for toys, newspaper stories, military uniforms, signs, and old comic books, and they line the walls in protective cases. It’s probably one of the best possible dining options for anybody who has business in Franklin County, but I just didn’t feel it would warrant a detour.

While 41A turned north toward Tullahoma, I continued west along US-64, which would occupy most of my driving for the next few hours. The next destination was the town of Fayetteville, which I rolled into just after noon. I anticipated the next meal would be a memorable one, as a roadfooding buddy of mine, Davwud, highly recommended the Chuck Wagon Diner. This breakfast and lunch place – they are open for supper on Fridays only – does the anticipated plate lunches and burgers, but their barbecue is very highly regarded. Davwud wrote up the Chuck Wagon for his blog three years ago, and while the place has changed a little bit, the barbecue is indeed as good as he reported. 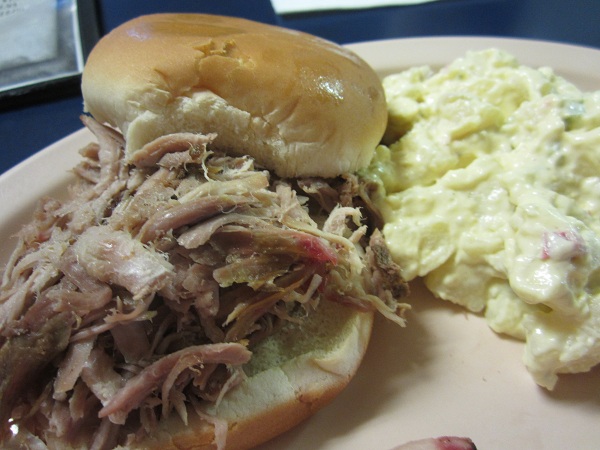 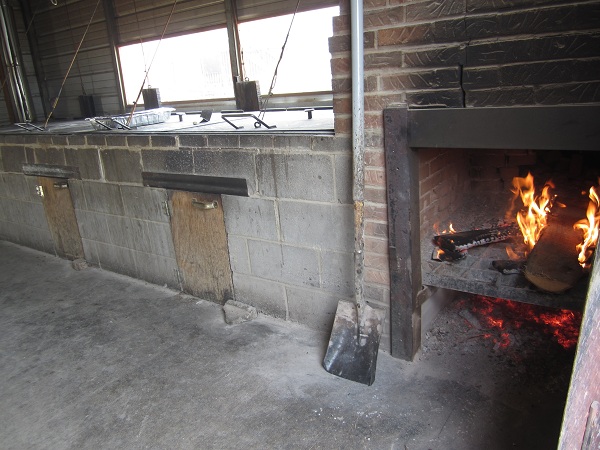 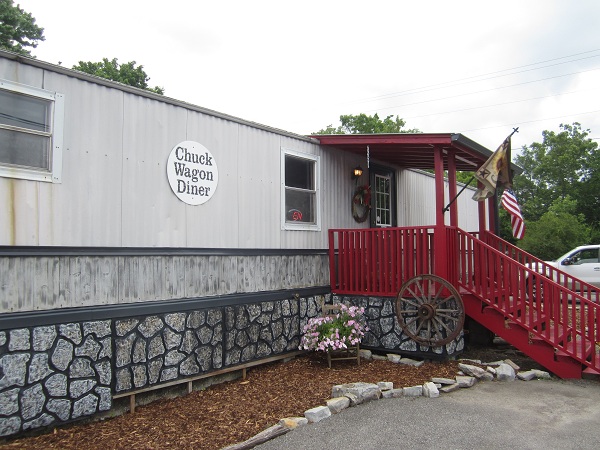 Chuck Wagon originally opened in 1974. The owners then were Rufus and Nancy Goolsby, but they sold the business to Maurice and Curtis Creson earlier this year. The change in ownership has not slowed their lunch business at all. When I arrived, there was only one place left in the grass lot that would not block anybody else, and both of the singlewides were packed with happy eaters. The restaurant is a pair of singlewide trailers joined together in a right angle, and I took my place at the counter next to a fellow who had already placed his order and was waiting with a long smile.

The only disappointment was with the potato salad. Several recent chapters here have mentioned again how, these days, I avoid the calories of this favorite, but Davwud was so pleased with the Chuck Wagon’s that I just had to order it along with a pork sandwich. Sadly, what I received was, flatly, not what Davwud had enjoyed, but clearly potato salad from a great big institutional bucket. I had two bites, wondering how much better the good stuff used to be.

Happily, the pork was so darn good that I didn’t mind much. They smoke Boston butts for sixteen hours over hickory in an awesome shack out behind the trailers. Anyone who’s making a barbecue excursion who has any interest in how their meat is prepared should really plan to come check this one out. I jawed for a few minutes after my meal with the fellow watching the pit, who told me that their ribs and chicken are smoked for only six or seven hours on a separate grill. It’s a terrific setup, but man, it gets incredibly hot in that shack.

Back in the diner, however, things are laid-back, if just a little crowded, on the dining side of the counter. Watching the frantic activity of the cooks and servers dancing their way through the line of people waiting to pay is so distracting that I could barely keep up a conversation with the fellow next to me. I felt a little guilty when my barbecue came up before his hamburger steak. “Oh, that’s all right,” he said, “I’m in no hurry and it’s worth waiting for.” The pork was simply excellent, with a mild taste of smoke and the right balance of moisture and flavor.

Three sauces are available, and, surprisingly considering the part of the country I was traveling through, this would be the only white sauce I saw on the trip. As I’ve mentioned before, white sauce is occasionally mentioned in broad brush descriptions as something from Alabama, but it is actually quite uncommon even in the state, and here I am in Tennessee sampling some. It was pretty good, but the hot brown vinegar-pepper mix was even better. I enjoyed every bite, while the old fellow with me kept waiting patiently. I wondered whether I should offer him my potato salad.

The servers continued to dance and twirl and find the right tables for orders. I finished my excellent barbecue while the poor fellow waited with a smile for his lunch, but life’s like that and I had a pit to go see. I paid up, got a carry-out menu, and returned to my counter space to leave a tip as the old guy finally got his hamburger steak. “I sure am glad they found you something to eat,” I told him.

About twenty-four hours later, I’d have a wait about as long as this fellow did, and remembered his smiling patience with a lunch so greatly desired.

This is our 750th post! Thanks for reading, everybody!