One of these days, I need to go up to Roswell and do a proper expedition of all the sixty-eleven taco joints on Highway 9 below Holcomb Bridge Road. There are quite a few of them. The kids and I were in town one Saturday to do a little beer shopping and I thought we’d get a hamburger. Driving north through the area, however, I changed my mind and pulled into Tacos Linda Vista. It is one of the newest places to set up here, in a building that had previously been home to another taqueria, Tacos Frisa. We’ve all been going back and forth about what the restaurant was before that. I say it was a Kentucky Fried Chicken, but I can’t get any consensus on that point. What say you, dear reader? 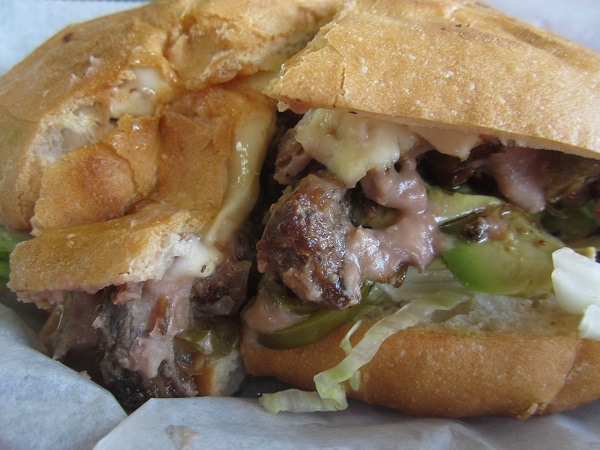 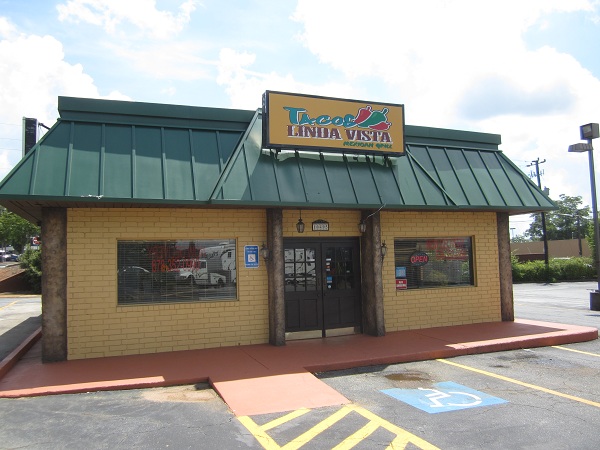 See, this corridor is just full of restaurants that have moved into the shells of national names once they’d pulled out. You can spot former Burger Kings and Wendy’s up and down both sides of the street, all now home to businesses that cater to Roswell’s growing Spanish-speaking community. Tacos Linda Vista is evidently one of the latest, and they serve up perfectly decent grilled meats in their tacos and tortas, along with some good flavors in their salsa bar. It’s certainly worth considering for a visit should you have business in Roswell, but I don’t know that it’s worth a trip across town.

Now, what is worth a trip across town every once in a while is Chamblee’s venerable Old Brick Pit. Son of a gun, this was a pleasant surprise. You know how, every blue moon, you get to craving something really specific? I’ve only eaten here twice before, many years apart, and that second visit was (hell!) more two and a half years ago. About a week earlier, I started craving that meat, that stew, that slaw, that experience. Weird. 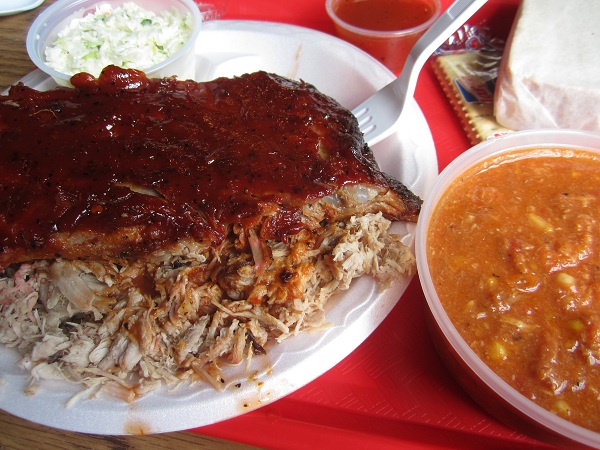 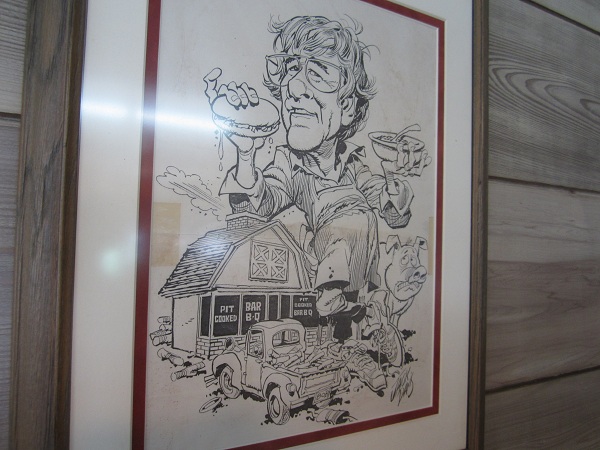 I felt kind of bad when I wrote the previous chapter about Old Brick Pit, and I still can’t read the dratted thing without tearing up a little. We try to keep our stories here positive and, when the real world is awful, as it infrequently is, not let it come crashing into this blog, but our supper at this restaurant on New Year’s Day 2011 was the last that we had together before my dad passed away, and it kind of overshadowed everything, to the point that now, the restaurant is inexorably tied to his death. That’s not fair, but it’s part of the same process that lets happy nostalgia elevate good meals into fantastic experiences. Can’t have light without the dark.

Also of course, in our blog’s first year, we were kind of rigid in our use of photographs. I don’t know why I mentioned that there was a Jack Davis caricature of the original owner, Bob Newton, on the wall and didn’t think that we should share a picture of the blessed thing with you.

Newton passed in 2000 and the business was given to Steve Garner. His sister Jane Ann Jarvis became the owner in 2006. Very little has changed except, happily, the crowds that I had never seen before were present on this visit. 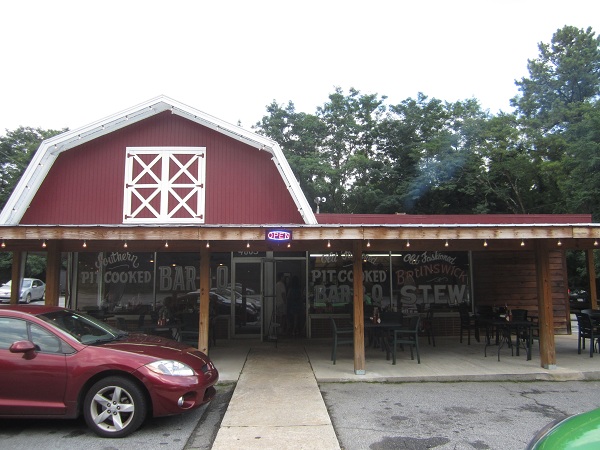 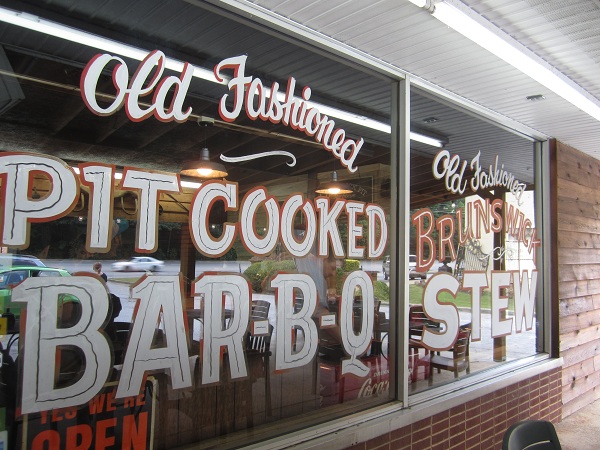 It was just strange luck, I suppose, that on each of my previous visits, we were the only guests. There was another time, incidentally, about 2002, when I wanted to come by but they had been so slow that they closed early. This time? The place was jumping. There was a huge crowd eating out front on the patio, several of the tables inside were taken, and a long line of people doing takeout orders. Business has improved so much that they stay open an hour later than they had been for years, now shutting at eight in the evening. They’ve even got new paneling on the interior walls, and while they hung the Davis portrait again, they’ve left almost all of the old New York Times write-ups in storage. Mrs. Jarvis should see about putting those back. They do a lot for the building’s sense of history.

The food’s reliably good, and better than I remembered it, although I’m not mad about the sticky red sauce that they ladle over the ribs. It tastes like vinegary marinara sauce to me. They use hams, smoked for twelve to eighteen hours down a shaft and away from a hickory fire. The setup of the pit is similar to the one used at Chuck Wagon in Fayetteville, Tennessee. The Brunswick stew is classic, meaty orange like you see in many older Atlanta-area and central Georgia places. The really good slaw tastes like what you remember Chick-fil-A tasting like from your childhood, before it was made with chemicals by the ton. The ribs, which I forgot to ask for dry, are exceptional, flatly among the best in Atlanta.

It’s a really great place, even if we did not completely succeed in exorcising the ghosts of our sad memories. Without any prompting, as we pulled in, my daughter said “This is where we ate the night before B.A. died.” And when they all went outside and I stayed behind to shoot that picture of Jack Davis’s drawing, a family in line was asking each other if they knew what Brunswick stew was. I told them that it’s typically made with pork, chicken, tomatoes, onions, corn and some seasoning and spices, and that the recipe they use here is one that my dad loved.

Anyway, we were actually on this side of town because Marie had decided that for supper, she wanted dessert, and asked me to pick a place where she could get a big treat. I remembered that Sugar Shack, which we last visited almost two years ago, was among those restaurants cursed with terrible after-sunset photos on our blog. A new stop would satisfy Marie’s craving, in this case with a dark chocolate mousse cake, and also give us a slightly better illustration for posterity. 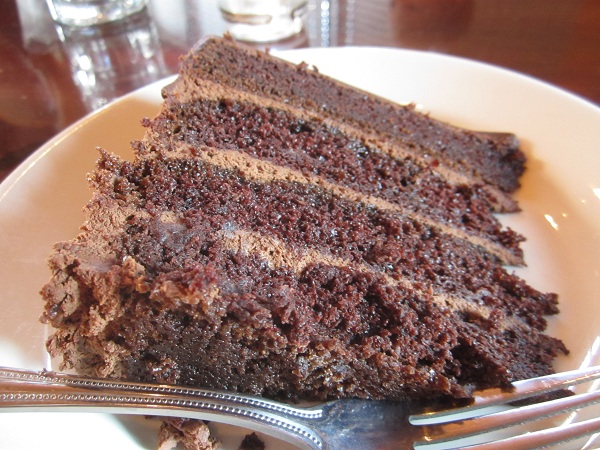 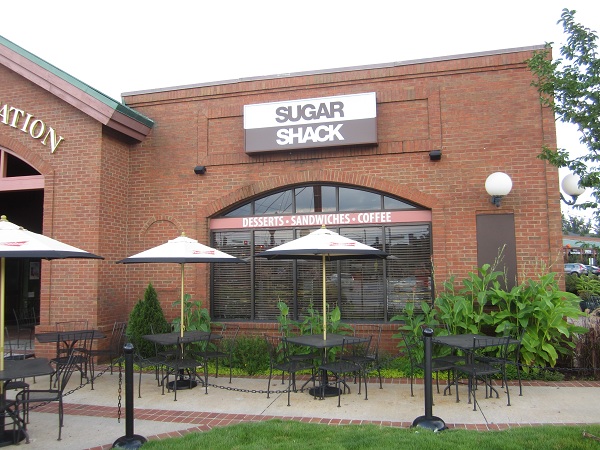 Honesty compels me to report that Marie was happier than either of the children with her cake. The girlchild finished her white chocolate cheesecake brownie, but wasn’t really keen on it. The toddler barely even touched his sugar cookie, possibly because he was full of baked beans and stew from Old Brick Pit. I know that I was. The cashier at Sugar Shack asked what I would like, and I replied that I already had ribs for dessert. I was good.