Last month, the local chef Asha Gomez closed her celebrated restaurant Cardamom Hill, in part because the space was too small to seat all of the people who wished to eat there. I have never once heard of a barbecue place having that problem. In many famous places, the line and the parking issues are part and parcel of visiting, which is how President Obama was able to get all sorts of column inches in the papers by cutting in line at Franklin Barbecue in Austin TX – and by buying lunch for everybody whom he delayed, which was good of him – but that doesn’t mean that Marie and I ever want to deal with it with our impatient three year-old in tow. Or subject everybody in line with us to our impatient three year-old!

That’s why we don’t make it to Fox Brothers Bar-B-Q very often. Whenever we go, it’s with a Plan B in mind. If we can’t find a space in their too-small lot or on the side street, Elmira Place, we just keep going. That’s a shame, because Fox Brothers is certainly among the city’s very best barbecue joints, and a punch in the mouth to anybody who wants to suggest that Georgia barbecue is less than amazing. There are places in our travels that I enjoy more, but the list of places that I enjoy less is as long as your arm.

When I last wrote about Fox Brothers – I’m not particularly pleased with that story – I wrote from the perspective that the owners’ Texas upbringing influenced the menu and the preparation of the meat in such a way that it really was not traditional Georgia-style barbecue, and consequently, I believe that visitors to our city should bypass it if they only have a short space on their schedule for barbecue.

The funny thing is, now that a few years have passed and I’ve had time to think about it, I’m seeing Fox Brothers’ influencing so many others that this position might not be all that sensible. I’m just not sure. See, I would argue that traditional Atlanta barbecue is chopped pork, prepared with a style that runs from Memphis through north Alabama. You see this, or in some cases, saw this, at many older places in this region such as Barbecue Kitchen, Fred’s, Harold’s (which has closed but influenced many), Hudson’s, Old Brick Pit, Old Hickory House, Wallace, or Williamson Brothers, and you see that lineage in some newer places that use a similar style, such as Bub-Ba-Q, J.D.’s, or Mr. D’s.

But Fox Brothers, along with the suburban bombshells from the Sam & Dave dynasty, emphasized pulled pork, often with a little bark, and started serving up sliced brisket of far, far higher quality than any brisket that Atlanta barbecue joints ever smoked. They also never, ever serve their meats presauced, while this is standard for most of their predecessors. I think that you can make a case that Jonathan and Justin Fox, Sam Huff, and Dave Poe changed all the rules. If you look at all of the most celebrated places in the region that have opened in the last decade – Big Shanty, Burnt Fork, Grand Champion, Greater Good, Heirloom Market, Smoke Ring, Sweet Auburn – I think they’ve all got these four guys in their DNA, and not the north Alabama-influenced preparation and, more importantly, flavor, that once exemplified Atlanta barbecue. 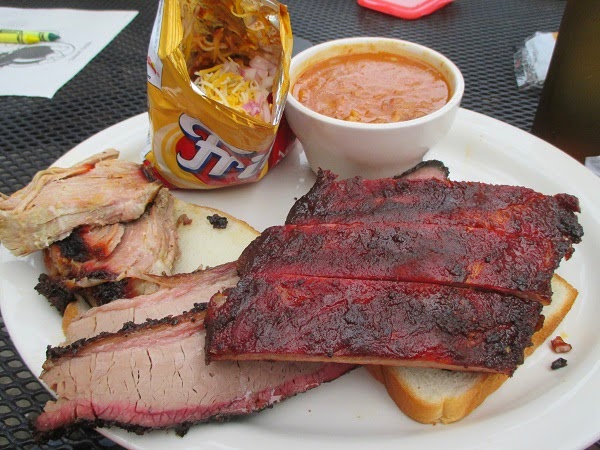 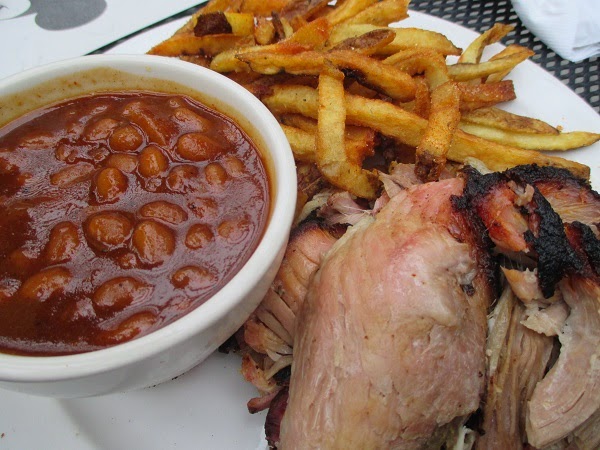 I still think that Heirloom Market is my favorite and, arguably, the best in the city, but Fox Brothers is not far behind, and that’s because their brisket, their ribs, and especially their stew is so amazingly good. I’m not as wild about their pulled pork as I am about what you can find in many other places, but Marie completely loves it, and probably ranks it second on the planet only to Southern Soul, on Saint Simons Island. Whatever you order here, you’re guaranteed something incredibly satisfying. You’re also guaranteed to want to follow up your lunch with a light vegetarian dinner, because man alive, can you ever overdo it on the meat here. 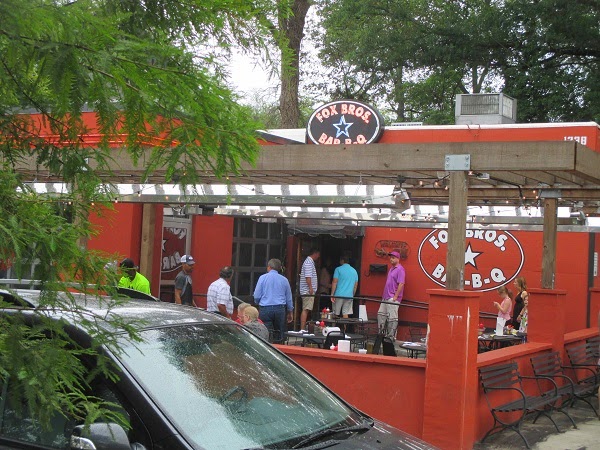 I think that the best solution to the problem of having either tourists or barbecue writers on road trips stopping by Fox Brothers and only Fox Brothers is to tell everybody from Nags Head to Nacogdoches to quit planning their trips to only include a half a day in Georgia. A meal here will impress anybody, and I suppose that it’s fair to say that you can get a fairly good idea of how Atlanta barbecue is evolving by enjoying a meal at one of the modern architects’ joints. But really, this place has been written about so much, by so many, that it’s tough to find a new angle. Hence this big cultural history lecture. You gotta give Atlanta at least four stops, friends. If Fox Brothers is one of the four, I suppose that’d be fine.

Ah, but that’s Atlanta barbecue, or northwest Georgia barbecue anyway. The styles in the Columbus area, the Macon area, and the Athens area all have their own influences and flavors. No, half a day just won’t do it.

Some of the many, many other blog posts about Fox Brothers:

Also see this post about Heirloom Market from Barbecue Bros, which came about because I advised my friend from North Carolina against making Fox Bros. his only stop in town. I look forward to his eventual report on the Fox’s ‘cue when he comes back to Georgia one of these days for at least a week, and hope to dine with him a few times that week. We’ll have Andy join us and have an awesome time. Whaddaya say, Monk?