I had heard of the Meat Week craze about three years ago, but didn’t pay the lovably silly tradition the attention that it deserved. Then, there had been a branch in Athens, and Hillary Brown at Flagpole had reported on one of its week of barbecue activities. That was when I first heard about the excellent Big Al’s BBQ Pit, a joint that left us far, far too soon.

Flash forward to the present, and we thought to see whether our buddies at Spatialdrift were free for a Sunday lunch. They were headed to Daddy D’z to join the Meat Week crew for their tenth anniversary kickoff. This year, there were week-long events in fifteen cities. The Atlanta gang, led by Captain Tracy Galasso and First Mate Jeff Thornton, at least planned to chow down at seven inside-the-perimeter restaurants. The ice storm that smacked the city on Tuesday messed with the plans a little; the ongoing parking – slash -dining-in difficulties at Heirloom Market forced another reschedule. But the first event, anyway, went off without a hitch, and everybody enjoyed some very good pulled pork, and Daddy D’z signature little mini-chimichanga ‘cue wraps.

On the Friday night of Meat Week, we rejoined the crew, a good two dozen strong, at The Smoke Ring, a downright excellent restaurant that opened late last year in the Castleberry Hill neighborhood, just down the street from Philips Arena and the Georgia World Congress Center. Incidentally, I was at an event at the GWCC just two days later, and there were ads for The Smoke Ring on every video board in the place. Good advertising spend, that. They put their name in front of heaven-can-only-guess-how-many people in one day. Representing the hobbyist crowd among the mob were us, Spatialdrift, Marilyn from Atlanta etc. and, toward the end of the evening, Dustin and Jamie from the not-seen-often-enough Georgia Barbecue Hunt. 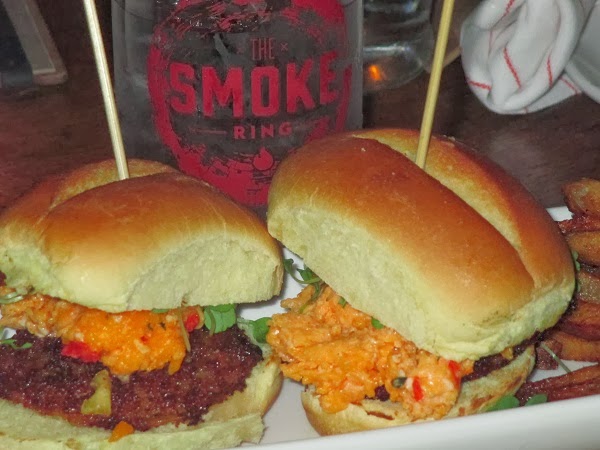 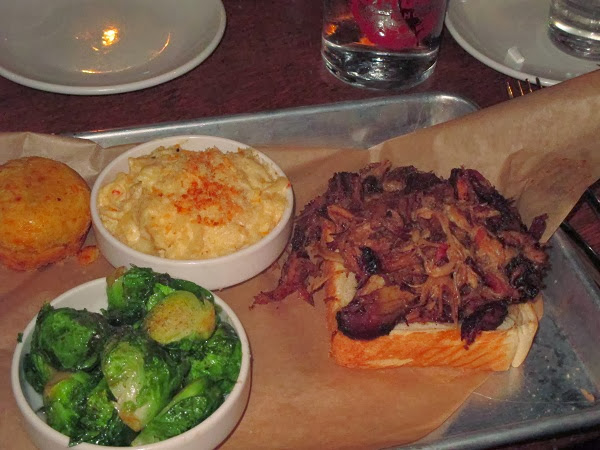 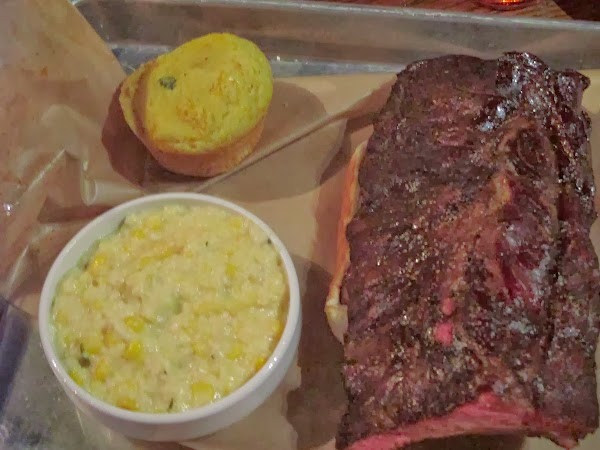 Our meal was magnificent. The Smoke Ring has won some hefty accolades from many of the town’s food bloggers and damned if they didn’t prove those words with us. This is seriously upper-tier barbecue. About the only complaint I can muster is that I have no great fondness for baby back ribs, but the ones that Marie ordered were still really tasty, and cooked just to our preference, with a little pull needed.

I started with an order from their menu of sliders. The Farmer’s Daughter – as soon as the words were spoken aloud, Emily said “She’s hot,” and Marie said “This sounds perfect for you!” and I think I must have blushed – is a fried green tomato topped with pimento cheese and pepper jelly. An $8 order gets you two of these and some excellent house-cut fries. There are several other interesting appetizers, but I’d recommend getting these.

Marie had the baby back ribs with delicious creamed corn, and I broke with tradition and had my pulled pork with some very interesting crispy Brussels sprouts served with a drizzle of maple syrup. I’ll still never be completely won over by Brussels sprouts, but these were tasty and appealing. I also added a side of their celebrated mac-n-cheese – in what appears to be an unfortunate concession to the much higher rent in this neighborhood, costs are kept in line with local tradition by only offering one side to a plate rather than the conventional two – and that was much, much better. While probably not quite as good as the godlike mac-n-cheese at Wyatt’s, this was still so rich and creamy and wonderful that one member of our party might have been photographed licking their bowl clean.

But the pork was the standout, and by miles some of the best anywhere in the Atlanta region. Smoky, tender, and just a little moist, it is heavenly on its own, but some killer sauces are available. There’s a red sort-of-Georgia-styled tomato-vinegar blend, which has strong echoes of some of the great red sauces in the region, but kind of off-kilter and unique as well. Also on the table, to much curiosity, is one of the very few northern Alabama white sauces to be found in this market. It’s light mayo, vinegar, and pepper, and while originally intended for chicken, like the very best white sauces, it also goes well with pork. While it is not on the table, be sure to ask for their mustard sauce as well. They’ll bring you a little cup of it and it is utterly unlike any mustard sauce that I’ve ever had at any barbecue joint. It’s made from whole grain mustard and Sweetwater 420 and it’s completely amazing.

The brisket is also fantastic here. It’s incredibly difficult to get this meat right, but Adam ordered the smoked brisket burrito – a gigantic, cheese-covered beast about the size of those “big as your head” monsters from the midwestern burrito chain La Bamba – and shared some of the beef. Heirloom Market does an exemplary job with brisket, and this might be better. Order a plate of that and definitely get the mustard sauce. Oh, heaven.

Jordan and Erin Leigh Wakefield have worked magic on this menu. We’ve enjoyed two of the other restaurants in the 101 Concepts umbrella, Food 101 and Cibo e Beve, but this tops them both, and tops most of the other barbecue joints in town as well. Atlantans, get here. It’s something special.

Other blog posts about The Smoke Ring: