After several years hoping that time had improved the quality of the barbecue at Williamson Brothers, we made a cautious trip to the gigantic barn of their flagship store. I won’t rehash old complaints, rather, I’d prefer to learn from them and stay away from certain things on the menu that I don’t enjoy. Full disclosure: in the mid-1990s, my parents found themselves enjoying this place, and befriended the owners, and so I have been many, many times on their dime. I briefly developed a taste for it, and it took a while, and a much broader experience of barbecue, to lose it.

We’d been snowed in like the rest of the city at the end of January. Our experience was mild compared to many; my commute home was a little over nine and a half hours, the last half-mile on foot. Marie stayed at work overnight and came home midday Wednesday. Nevertheless, come Thursday night, we were ready to get out of the house. I’d been thinking about giving Williamson Brothers another try for a few weeks anyway. Unfortunately, the experience still was not a good one.

And this doesn’t make sense, because I spoke with the fellow manning the interior fireplace pit for a few minutes, and he pulled off a small piece of outside pork that had been smoking for six hours for me to try. The procedure here, as shown in the middle picture below, is to start the meat on the lowest rack above the fire, spraying it all with water every ten minutes or so, and to move it up to the next rack after two hours, and then the top for the final two. The resulting meat is as delicious as any served in any restaurant in the southeast. That snack was downright perfect, and sadly, what they bring to the table doesn’t taste anything remotely like that.

If they had served us a plate of what I tasted, I would be raving about this restaurant. But no, the plate that I was given tasted like it had completed the smoking process many, many hours previously and had lost that just-moist enough edge and that smoke-filled, sharp bite, deteriorating into a heap of mushy cafeteria meat with no texture. I then realized that something about Williamson Brothers’ procedure rings very hollow. This gentleman put the meat on to begin its way up the chimneys at seven in the evening, to be finished, after six hours if he was being honest, at one o’clock in the morning, meaning that the meat will sit for ten more hours at the very least before it can be served to anybody. No wonder, then, that the meat comes out already sauced. They’re covering up the taste of old as best that they can. Is the whole business of the interior fire pit nothing more than smoke and mirrors for guests? Is the bulk of the smoking done separately? 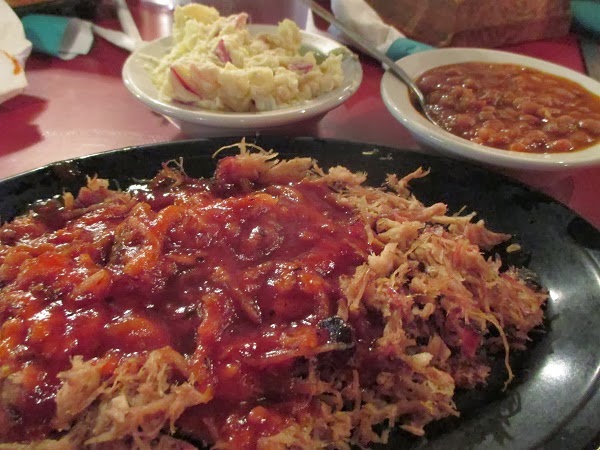 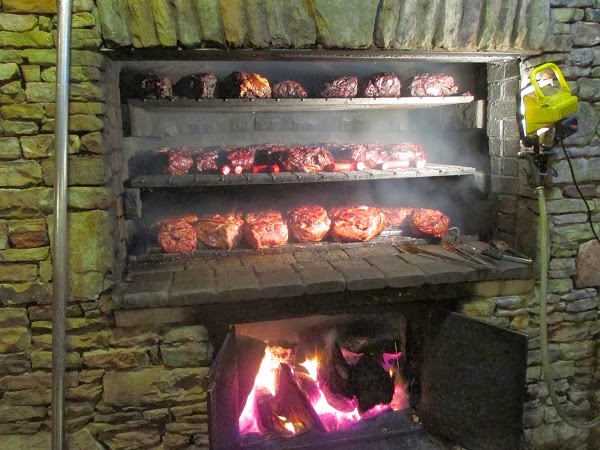 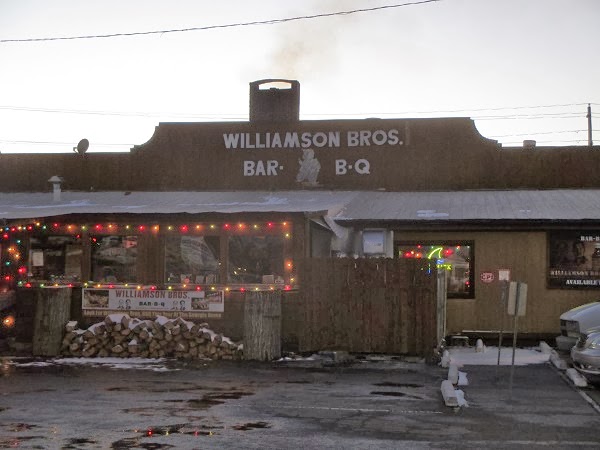 I had remembered not to order their stew or slaw; neither of these are to my taste. I also remembered to tell our server to bring out all our food together. They have a unique and downright dumb policy of bringing out cold sides ahead of the rest of the order. But I forgot to ask for the meat dry; the presence of a big bottle of this sweet, tomatoey goop – so sweet that it’s less like sauce and more like jam – must’ve made me think it was going to come out dry. Fortunately, they didn’t completely drown every inch of the meat with it. The sauce is horrible. I would not describe it, as I might in chapters about other places, as “a sweet tomato-based sauce.” It tastes like high fructose corn syrup, with a layer of chemical preservatives, followed by a gentle aftertaste of tomato.

They have four other sauces, all of which are actually a little better, but they still taste too much like chemicals. There was just enough undrenched meat on my plate to sample the far better flavors of their garlic-tomato and their spicy chipotle sauce, the two that I enjoyed the most, along with a honey-tomato and a “Carolina gold” mustard sauce. I got one bite of meat in each, enjoyed them a little more, then spooned most of the spicy sauce over the original jelly that they’d used to ruin my meat in an attempt to salvage it. I have the impression that if you ask, the servers will happily give you the meat dry, along with bowls of whichever sauces you prefer. That’s a good policy. If you must visit this restaurant, please remember it. They seem to employ some enthusiastic and helpful people here and anything that you can do to help them realize what horrifying mistakes the kitchen is making is bound to benefit them in later life.

“There’s many a slip ‘tween the cup and the lip,” somebody once said. Somewhere between that fireplace and the table, something about their preparation is badly in need of a fresh approach. Burying what little flavor of the pork is left with that ghastly goop is just making a bad situation worse. I had put off visiting for about four years, and I’m putting off a return for a whole lot longer.

Other blog posts about Williamson Brothers: