This is Marie, contributing an article about Esther Price chocolates. Esther Price is a company based in Dayton, OH, where we nearly moved in 2012. I went up there to visit for work a few times, and checked out a few restaurants. One of the things I looked for was chocolates, in part because I am a complete candyholic, and in part because one of the visits was in December, when my mind is on interesting gifts for people. Everyone I talked to about chocolates mentioned Esther Price, both with enjoyment and a considerable amount of hometown pride.

The eponymous Esther started out as a home business, making and selling chocolates for 30 years before starting her first storefront. The chocolates have won prizes, including regularly being named best in the state by Ohio Magazine, and have benefited from an exception from the norm in one crucial respect; unlike many other businesses who change recipes and make attempts to reclassify non-chocolate ingredients as acceptable (vegetable oil should NEVER be in chocolate, you naughty mass producers!) Esther Price sources their ingredients locally. While I cannot personally vouch for the accuracy of these claims, people whose opinion I value and who have lived in Dayton for years have praised the chocolates very strongly, and that doesn’t happen with companies who disappoint their long-term clientele. And the website quotes Esther Price’s grandson as saying he had great pride in the company for keeping his grandmother’s recipes. 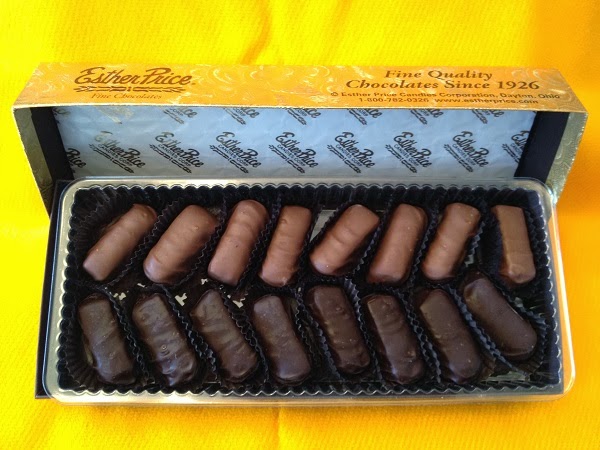 I got a box of the caramels for Christmas, mixed dark and milk chocolate. I preferred the dark chocolate as usual, but they were both pleasing. The caramel is just a tad softer than I like, but the chocolate coating is thicker than most so that adds texture. I have to wonder how these would taste with sea salt. 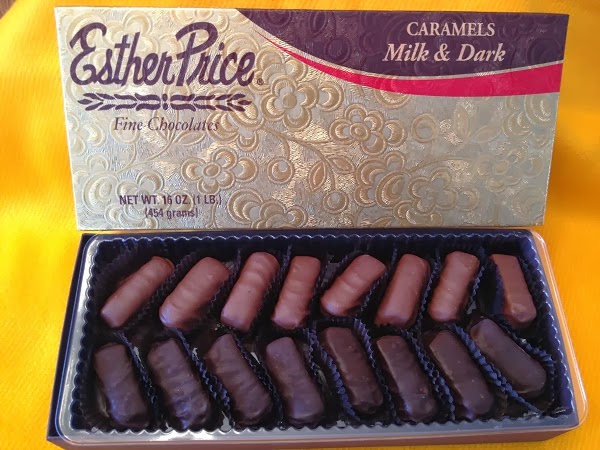 However, remembering my favorite chocolates, I wondered whether there was another presence in Dayton that would provide competition and therefore keep the company on its toes. And what do I find but a business called Winans Fine Chocolates – there even used to be a location in Georgia not three miles away, in downtown Marietta, which if I had been prescient enough to check it out, would have been still open for a short time after I moved here! Such a shame I didn’t have the opportunity to set up a head-to-head challenge for this story.

Hey, readers! This is our 900th post! Thanks for all your support, shares, and feedback. Wonder what we have in store for the big One-oh-oh-oh? Stay tuned!!