I’ll try not to get too detailed with silly backstory with this one, but I can tell already that it might be tempting. Y’all bear with me.

I was supposed to go to Athens on Labor Day weekend, but I picked up some extra hours instead. I hadn’t decided where I was going to eat, but I was looking forward to a nice, long, relaxing day. I put it off two weeks. Then we had a daycare crisis. They kind of shut down and moved on us. So my mother volunteered to watch the baby until we found new arrangements. I felt it would be wrong to spend a day playing in Athens while my mother watched the baby, so he needed to come with me. Then he started being a real handful, evidently not enjoying the routine change while simultaneously beginning serious teething. I figured I could use some help, and my daughter had spent four weeks not getting in any trouble, so she could take a hooky day and help out.

Around the same time, I renewed my acquaintance with a wonderfully fun barbecue blog called Where’s the Best BBQ?. (link down) It reminded me that there are still a pile of restaurants in northeast Georgia that I have not tried or revisited in ages, including a few along the I-85 corridor. I decided to take the children up to exit 129 and follow GA-53 through Hoschton, to Winder, and then go along to Athens that way. This would bring me past five barbecue places not yet featured on our blog. I picked two of them for meals, and I think I picked right. We might just go this way and get another two next time!* 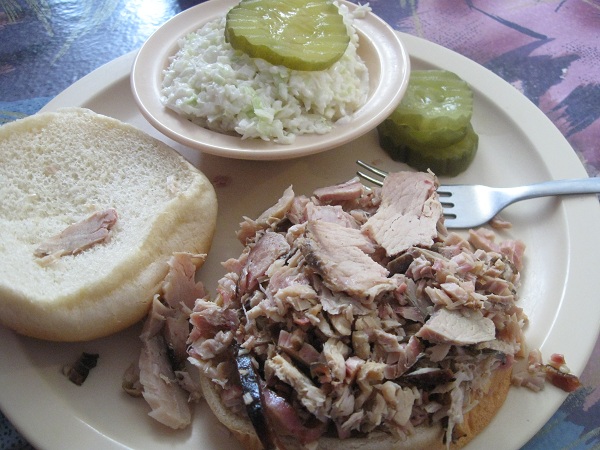 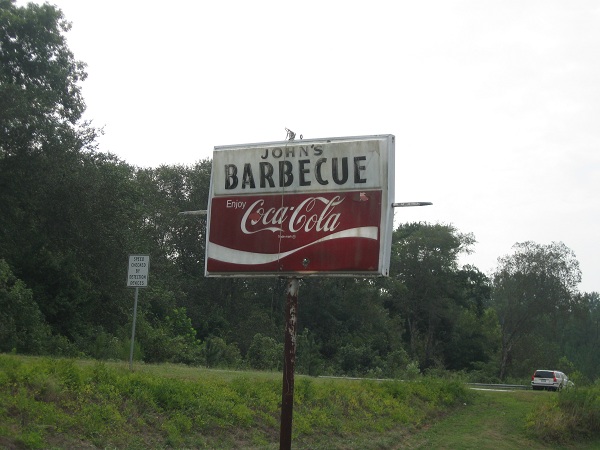 Where’s the Best BBQ? did caution that John’s Barbecue is quite surprising in its lavender decor, but nothing really prepares you for how genteel and dainty the interior of this place is. From the outside, it looks like many other grizzled, old-timey side-of-the-road joints. Its sign was erected 47 years ago, and has seen many better days. It is completely smashed on the Winder side, and its interior lights ripped free when a semi truck took out the wiring. Astonishingly, it turns out that crazy accidents involving semis and trailers have happened at least twice on this small plot of land.

I talked to the owner, who goes by “Bootsie,” a little about his barbecue, which is very smoky and quite dry and, if you can visualize it, flaky. It was very good, but the consistency was really unusual. That’s because he smokes deboned hams rather than Boston butts. He believes that he’s the only person anywhere in the region that cooks this way, and the only restaurant in Georgia that I can come up with that might is one in Toccoa***. Couch’s, in Ooltewah, Tennessee, does hams, but he serves them quite differently, almost like a deli sandwich. It may not be the perfect taste for everybody, but it is definitely memorable and quite possibly unique. Since we like to champion people here who do things their own, individual way, I really must insist that my readers add John’s to their to-do list!

Another notable point about our visit is that, for the first time, my baby boy had a meltdown in a restaurant and we were able to quell it. He had pitched a public fit only once before, about a month previously on Saint Simons Island, but that time he was being exhausted and darn mean, and this time he was just hungry. He probably just wanted to have some stew and slaw like his big sister. Both are quite good.

We stopped briefly in Winder to purchase some NuGrape and Ale-8-1 from the Quality Foods, and, in Athens, made our customary visit to Bizarro Wuxtry to pick up comics, and my daughter disappeared for the better part of an hour to try on clothes, and to witness somebody getting cuffed and hauled off for shoplifting. The baby was appropriately admired, and our friend Devlin wondered what flavor his fingers might be, as he spends a lot of time with at least three in his mouth. Devlin has been enjoying a bizarre candy called Haw Flakes, which sort of tastes like raisins but looks like what happens to a salami after Dr. Shrinker zaps it. I thought it was kind of tasty, but my daughter sure didn’t.

My daughter, like a lot of twelve year-old girls, has been cuteifying half the words in her vocabulary. She doesn’t give hugs; she gives “huggles.” She doesn’t eat cupcakes; she has “cuppycakes.” She was very pleased that we were going to get a “proper” snack in Athens, and not just stop somewhere for a bowl of chicken mull. We were actually sort of forced to bypass the mull snack this time; Butt Hutt is temporarily closed while they finish moving to a new location on Baxter. Devlin advised us that while the cuppycakes we sought might be good, we’d actually do better going out to the mall and getting a pretzel dog. I told him we might do that next time. 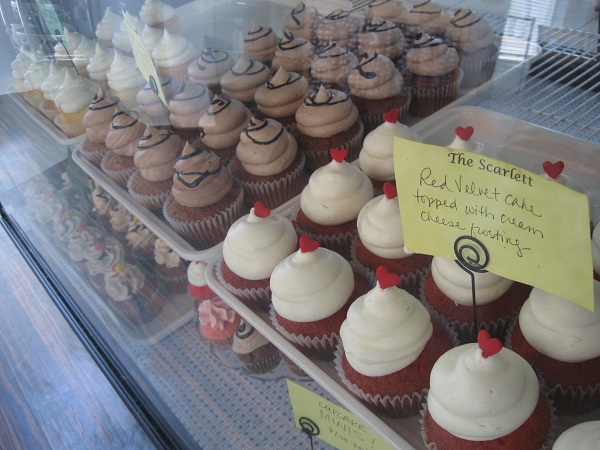 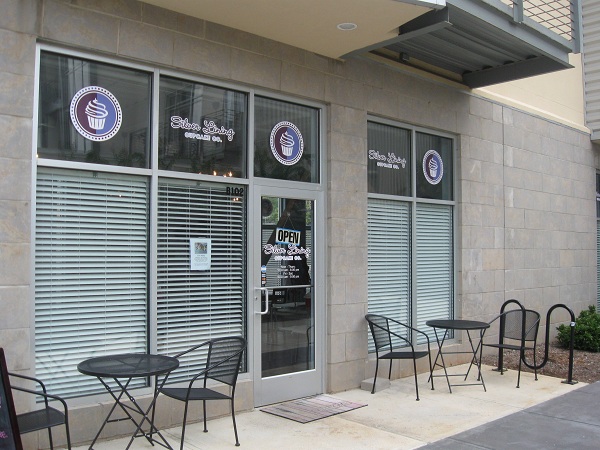 No, the cuppycakes came from Silver Lining, a business that opened last October and has been getting rave reviews ever since. The well-known chain Gigi’s has been getting a little more attention with its gigantic towers of icing and larger advertising budget, but Silver Lining, with its more reasonable amount of frosting and a delicious, subtle, and satisfying smile of natural flavors, is emphatically the better of the two. Gigi’s is just artificial enough to be noticeable. Silver Lining’s offerings are baked fresh six days a week and taste nothing but natural and light.

They are pricy – $14 for six would have instantly disqualified them when I was an undergraduate in town – but the black-and-white cake that I ordered was just heavenly. Besides, I think they’re cheaper than Gigi’s. They seem to offer eight a day from a rotating menu of perhaps thirty, announcing the day’s flavors on their Facebook page and taking special orders. This proved to be a very good choice, and a nice break from not just chicken mull, but our other common Athens snack, a Grill milkshake or malt.

We made one last stop in town – parents, if you haven’t learned the secret that public libraries are a fine place to stop and change dirty diapers, figger it out fast – and then got back on the Atlanta Highway for a final bite to eat at another new place. Actually, the library in Athens, currently undergoing major renovation, is a really fine one, but there’s at least one person who works there who doesn’t like the cut of my jib, so it’s really sort of a place to dump a dirty diaper and leave. Anyway, Big Al’s BBQ Pit opened this past December in a small storefront in Statham. This is a one stop light town halfway between Athens and Winder. 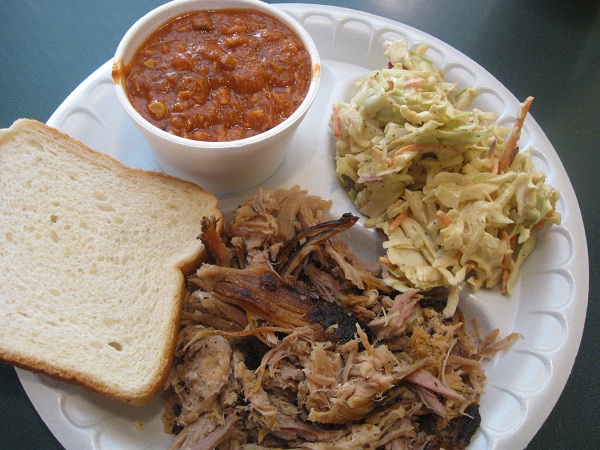 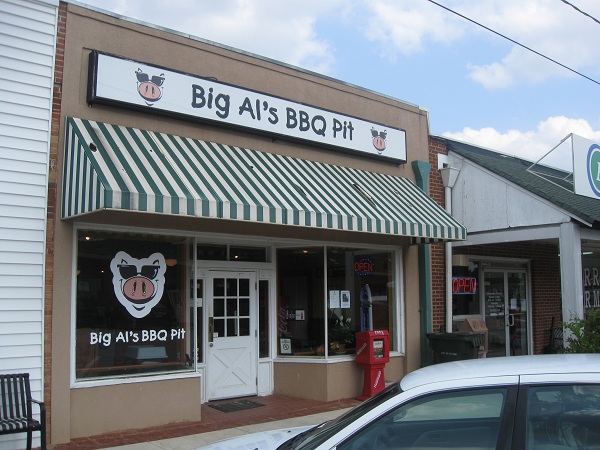 I had hoped to stop by Hollis Ribs in Athens. That had been my original thought of where I might eat on this trip, but ominous rumors had been circling that they were closed, and nobody was answering their telephone. I wrote Hillary Brown, who writes the Flagpole tabloid’s Grub Notes column and who can be relied upon for excellent food advice, and she confirmed that it was true, but recommended that I stop by Big Al’s instead. Coincidentally, it had been a note in her column back in January about Meat Week that alerted me to Big Al’s in the first place.

So this place, basically, it is unbelievably good. It is only open three days a week, and everything that they serve is knock-out-of-the-park good. Well, I wasn’t really sold on the vinegar sauce, but then again, I think that goes better with chopped pork than pulled. The meat is smoked and moist and delicious, and the “stew” – really, I would call this hash – is just a hair greasy and incredibly rich and thick, and the slaw is made with wonderful, pungent mustard. Oh, I haven’t had good mustard slaw in such a long time; this was fantastic. And you want to talk about a nice price? How about just $6.25 for a plate with two sides? Incredible! I don’t know how Al Calhoun does it, but he’s doing it right, and should be supported. Especially with Hollis gone, there’s another reason for Athenians to drive the seven or eight miles out of town to try this place, and for travelers to swing through while investigating all the great barbecue around Athens.

I’ve said before that while the city of Athens itself is not necessarily home to much in the way of fantastic barbecue, the region thirty miles around it is absolutely worth investigating further, and worthy of considered study by anybody who thinks they know good barbecue. Big Al’s definitely belongs in the good company here.

(*The three places on this corridor that we did not visit this time were Carol’s BBQ Shack in Hochston, Smokin’ Po Boys in Winder, and one of the two Fresh Air stores in the area, between Bogart and the outskirts of Athens, where I have eaten many times in the past. Since we started the blog, I have always intended to go to the original Fresh Air near Flovilla and write up that**; the other two are on the to-do list. Y’all don’t let me forget about them, though.)

(**Since writing the first draft of this entry, we have actually gone to that Fresh Air location. Look for that chapter in a couple of weeks!)

(Update, 7/6/12: Sadly, word finally reached Urbanspoon that Big Al’s shuttered in March after a 15-month lifespan. I know that the little downtown of Statham doesn’t get much traffic, but that’s harsh! I really wish he had been able to stick with it.)

3 thoughts on “Barbecue and “Cuppycakes,” Around Athens GA”