Have you ever noticed that the best of families just don’t want to risk anybody going hungry? We had stayed on the Thursday night with Marie’s Aunt Bertie and Uncle Bruce in Philadelphia, and we made certain they knew that we had breakfast plans in Baltimore, but Bertie just didn’t like the thought of us leaving town without something to eat. We woke a little before seven and there was an amazing spread of cheese and fruit waiting for us. We settled in and relaxed for a while. We wouldn’t be getting out on the road for a little bit yet.

Again following a recommendation from Diners, Drive-Ins and Dives, we made our way down I-95 to the Fells Point neighborhood of Baltimore, and had our second breakfast of the day at Blue Moon Café. This place is, again, completely wonderful and completely justified the attention. Obviously, that show’s researchers do their work and pick great places, so nobody looks stupid when tourists show up to try restaurants out.

It was packed; we had about a twenty-minute wait and it almost immediately turned into an hour wait behind us, but the staff works their socks off and are downright excellent at their jobs. Wonderfully, we were seated at the counter and could see the cook singing and dancing to every single song played on that Jack-FM station while we were there, prepping and stirring and slicing with abandon and flourish. We had a great time. And the food…? 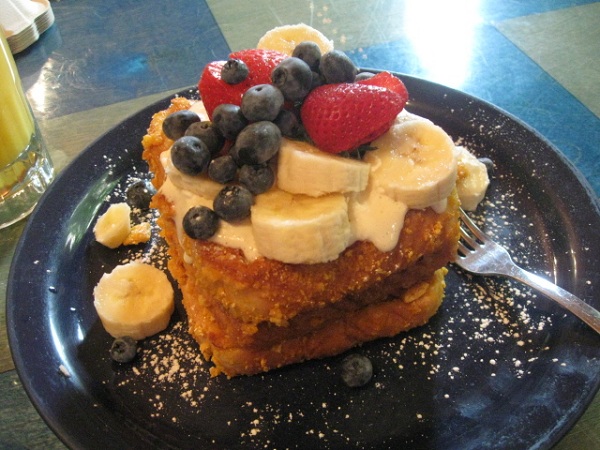 Decadent as hell. That’s an order of Cap’n Crunch French Toast and while all the walking we did mostly counteracted the food we ate, the pound that I did gain from all this eatin’ came from this thing. AND I WOULD DO IT AGAIN.

Unfortunately, Blue Moon seems to be just as well known for their line as their food. Reading what other bloggers have said, I’m incredibly grateful for only having to wait twenty minutes. Close to two hours seems to be the norm! I think that if you’re visiting Baltimore, I’d plan to go on a Wednesday or Thursday. Go on the weekend and you’re probably giving up a huge chunk of your day.

This stop turned out to be one of the most personally satisfying little chunks of the road trip, because the restaurant was literally three blocks’ walk from the stretch of road and the great old building on the waterfront where Homicide: Life on the Street, the best program ever made for American television, was filmed. It was so wonderful to walk around that place, where all those amazing actors had worked, and catch a little of the harbor breeze. It was a really nice day for it.