In the early 2000s, our friend Tory drove this wonderful clunker of a car that filled the air with toxic fumes and which she called Answers. I was in Nashville to visit her and she took me to supper at the celebrated Radio Cafe. This seems to have been in late 2003; the Cafe was closed for a couple of years but reopened around that time. I remember having a wonderful evening and seeing some live music. I also remember, when she started Answers’ engine at the end of the evening, the emissions-failing schlepcar instantly killed the bush that we’d parked next to. She took the regular ribbing over Answers being such a threat to our environment with good humor. Answers has since gone to that big junkyard in the sky. Antarctica thanks her.

The Radio Cafe closed in late 2006 and the building was renovated and refreshed throughout the following year. The new owner, Rachel Fontenot, opened Mad Donna’s, emphasizing fun and classic American bar and grill food. They apparently had a rough couple of years, during which new menu items were rolled out here and there. In time, they settled down and found a big following. Their weekend brunches are hugely popular, especially the 2-for-1 morning mimosas.

They’ve recently started serving an hour early. I had written Brooke and asked her to suggest an early Sunday spot, so that we could eat and get back on the road as quickly as possible. While she wasn’t able to join us, she suggested Mad Donna’s, whose web site said they opened at ten. When we arrived, we found they’re actually ready for guests at nine. Heck, we could been on the road an hour early, but I suppose that would have meant waking Tory and our daughter at the unbearable hour of eight. Marie and I, of course, had been up with the toddler watching cartoons on Sprout since about the time most of you reading this probably went to bed. 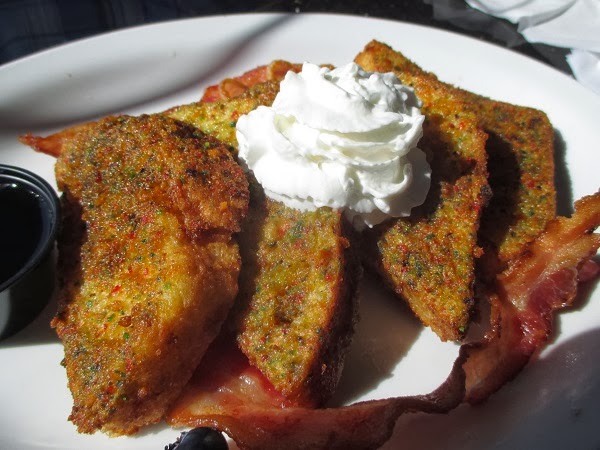 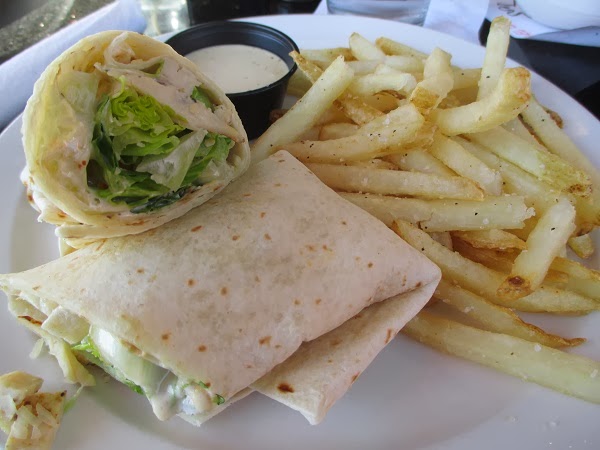 Tory joined us for breakfast. We love to have her join us to eat all the time, but when Brooke pointed out this restaurant is in Radio Cafe’s old space, I felt especially obliged, since I’ve spent the last ten years teasing her about her old car murdering that innocent shrubbery. I was a little concerned that nobody around us seemed to have much in the way of food at their tables, wondering if this meant an excruciating backup in the kitchen, but Tory reminded me that many people come here for either coffee or morning Bloody Marys or mimosas, and don’t order food at all. Indeed, our wait was not really a long one, and the food was all very good.

My daughter had the table’s best breakfast. The Cap’n Crunch French Toast is twice-dipped “Tuscan” toast from Nashville’s Provence bakery, crusted with breakfast cereal, with a drizzle of maple syrup and berries, served with a couple of slices of bacon. This is not quite like the celebrated similar offering at Baltimore’s Blue Moon Cafe, as here the cereal is ground into a sugary, powdered coating. It’s completely delicious, although I would understand if some of you would rather pass on that much sugar in the morning. 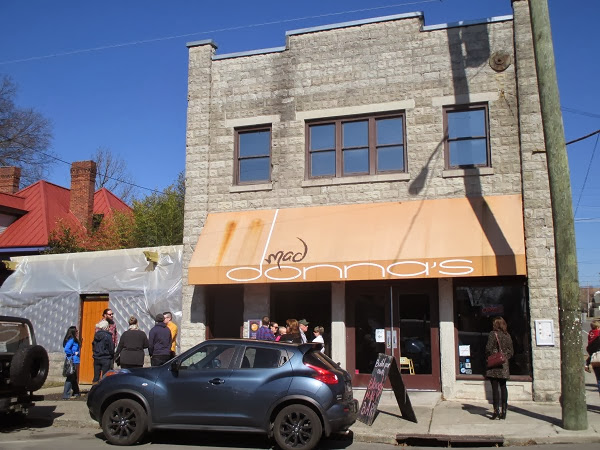 I enjoyed a chicken caesar wrap, and everybody was quite happy with their meals, but the morning’s high point came when the toddler (aged a little over two and a half) noticed an under-one baby girl outside, her mom rocking and playing with her as they waited in the growing crowd out front. “I want to sing to the baby!” he demanded. When we left, Marie took the toddler to say hello – Marie is among those moms incredibly curious about the age of every child we meet – and, true to his request, our toddler started crooning his ABCs to the baby! What a little flirt he is.

Other blog posts about Mad Donna’s: