A couple of weeks ago, Marie and I took the baby to Columbus and Phenix City for a day of eating, walking and visiting friends. We visited five restaurants and I’ll write those up over this and the next two chapters. A sixth, Fountain City Coffee, was intended, but we completely exhausted the almost nap-free baby, and so retired a little earlier than planned so he could get back in the car and go to sleep.

When I was last in Columbus, earlier this year, Katie and Maggi strongly suggested that Cook’s Place, a little joint at the end of the airport runway, would make a great stop for our blog. The business is better known as “Cook’s Hot Dogs,” and both names appear on the crazy, overwritten signage around the small but sprawling building, but I counted three “Place” to one “Hot Dogs,” so I’m going with that.

Plenty of places around the country make a claim to being a “1950s diner,” but Cook’s is one of the most interesting. Rather than sticking up some airbrushed posters of Monroe and Dean, this place is full of real artifacts from the period, including a great deal of loaned music memorabilia from a popular DJ who worked at a local rock station, WCLS, for many years. Some of it’s a little anachronistic, but it’s still neat to see that the station, at the height of Beatlemania, booked the Zombies and the Searchers for a “shindig,” so I’ll give it a pass.

Actually, the biggest anachronism was the music. Despite the poodle skirts, lettermen jackets and Roy Orbison autographs on the wall, they were playing a Sirius show hosted by Nina Blackwood and friends counting down the American top 40 from a week in September, 1980. Natalie Cole, the Pointer Sisters, Carly Simon and the Doobie Brothers all played forgotten, smooth, utterly godawful light rock numbers that peaked at # 27 and never get played on anybody’s radio anymore, mercifully. Another half hour of that treacly sludge, and I was either going to beg for some in-period 50s doo-wop or leave screaming, and a fellow has to be pretty darn desperate to want doo-wop. 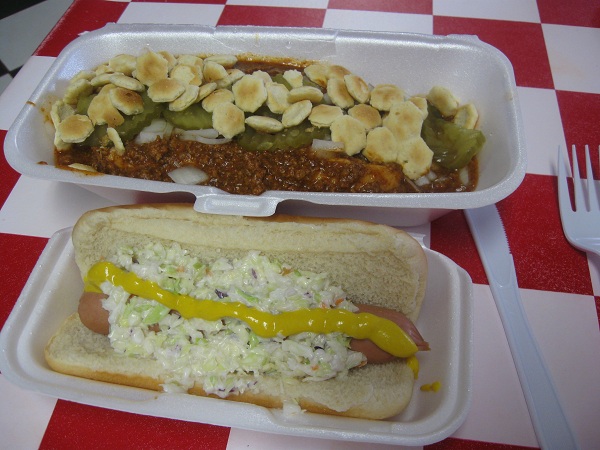 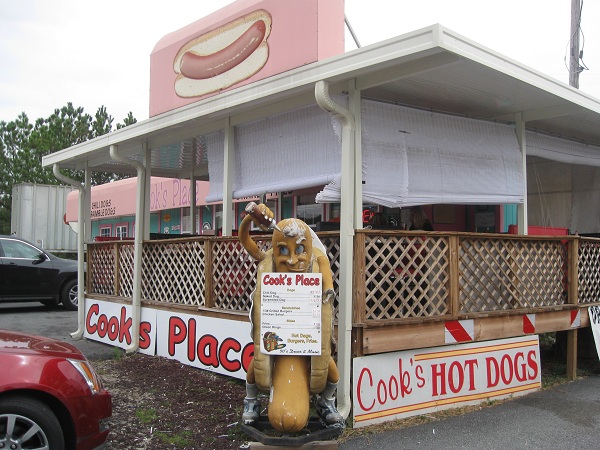 Cook’s is more about the experience than the food, which isn’t to say that it’s at all bad, just quite ordinary. It isn’t a patch on better hot dog joints. These are simple, basic, boiled franks, enlivened by the extras. The slaw and chili here are terrific, with the chili ensuring that their indulgent scrambled dogs are very nearly as good as the better-known ones at Dinglewood Pharmacy. It is a very popular place for families of all ages, and we saw many small parties ranging from older folk to groups of little league footballers coming in for these nicely low-priced dogs.

Interestingly, Cook’s is the central meeting point for alumni of the now-closed Baker High School, which I believe was open from the 1940s to the mid-90s. Usually, just the upstairs dining room and the outdoor porch are open to business, but for special events or when they get very busy, they open up the downstairs room, which is a very impressive sight. If the upstairs is choked with rock-and-roll and fashion memorabilia, then the downstairs is a living museum to Baker High, with old yearbooks and class rings and pennants from over the years, donated by that school’s former students. It is spectacularly cluttered and absolutely fascinating. Sure, you get some fake fifties things like a much more modern “Barbie Loves Elvis” doll set, manufactured for nostalgists, but it is mixed in well enough with the real treasures of the past that it does not stand out quite so much.

Actually, speaking of treasures from the past, while I was enjoying my slaw dog, I could not help but notice that the same act was advertised on several of the WCLS posters and things. The New-somebodyorothers. I figured that they were probably a local or regional act of the day and resolved to look them up when I got home. Would you believe that just three hours later, I was telling Ric about the old treasures on the wall and had already forgotten that band’s name? Next time I see something like that, I’ll try to remember that I actually have a camera with me and use the darn thing rather than relying on my failing memory. What were we talking about, again?