Phenix City, Alabama has a storied history of gangsters and organized crime and femmes fatale leading wide-eyed young recruits away from their first paycheck at Fort Benning. Well, that was the Hollywood version, anyway. It’s the town across the river from Columbus, and, honestly, it’s spent the last five or six decades just being the sleepy little smaller town and little more, but once upon a time, it really was a burg full of shysters and thugs, and things really were so bad that the G-Men had to come down in force to do something about crooks swindling the innocent wide-eyed joes who would leave base looking for anything fun to do. But, you know, that was so long ago that they were still called G-Men. The incident later made for a celebrated B-movie called The Phenix City Story, memorabilia of which can still be found in many Columbus antique stores, and a great little comic in one of Paradox Press’s Big Books.

Today, it’s better known as the home of lots of good barbecue. I’m aware of four restaurants presently; internet searching suggests there could be another seven. In a town of only 30,000, with plenty of other very popular places just across the river, I think that’s an impressive number. Some weeks before we went down to Columbus on our most recent trip, I had decided that when we go through town from now on, I do want to visit one or two places in Alabama. I will confess that this is as much to boost my Urbanspoon rankings in two municipalities in one trip as it is to vary our dining locales and try new things.

Our first stop in Columbus had been Cook’s Place, discussed in the previous chapter. After eating here, we went someplace to get some exercise. I have a standing promise to Marie and to myself that between Labor Day and Memorial Day, I have no legitimate excuse to keep me from undertaking some proper long walks, enjoying the outdoors. We drove over to Lakebottom Park and walked around there. As this is an intown city park, it isn’t quite the same as a good hike through the woods, but it’s still a nice way to spend some time and rack up close to two miles. It’s in an attractive old neighborhood, and Columbus High School, a gorgeous old building with concrete steps leading down to the street, borders the park on one side.

The park is just a few blocks away from Ric and Maggi’s apartment. Maggi, still recuperating from an attack of what she termed plague, bid us to go on to Alabama and bring her back something while she spent a little more time pulling herself back into shape before dinner. The baby was appropriately admired and doted upon, and the four of us left to visit Ric’s favorite Phenix City barbecue, the awesome Mike & Ed’s. 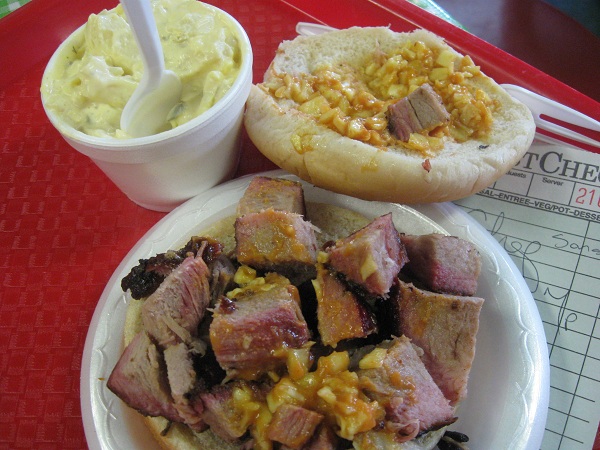 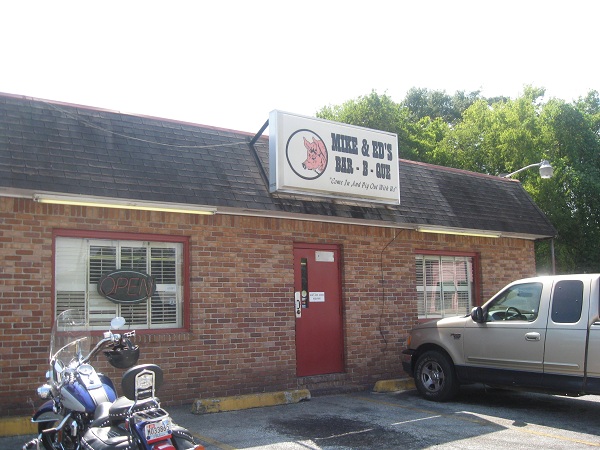 Now, Mike & Ed’s presently has two locations in Columbus, with a third scheduled to open on Manchester in an old Wendy’s in a month or so, but the Phenix City store is the original one. They flirted with franchising, with stores in both Auburn and back home in Athens, where Marie and I once met for dinner some months before we started dating, but while the expansion into Georgia didn’t take, they’re actually probably more popular in Auburn than at home. This will probably be the only time, ever, where I will note that Tigers fans have, at least on this subject, a little more sense than Bulldogs, since they had the mind to keep this good barbecue in town.

Barbecue comes here either as chipped or chopped. The chipped style is really shredded, and chopped is cubed. Honestly, it comes out as little cubes of meat. Unless you ask for it dry, the sandwiches come with barbecue slaw, as opposed to cole slaw. Either can be ordered as a side. Basically, the cole slaw here is made with cabbage and mayo, and the barbecue slaw is made with cabbage and the house’s mild mustard sauce. There are three table sauces available at Mike & Ed’s: mild mustard, hot mustard and a sweeter tomato-based sauce. The meat is absolutely terrific here. It is smoked precisely to how my own personal specifications are set, almost as if they were prepping for my arrival. You can also get the cubed meat in the stew, strangely. They offer both Brunswick stew and what they call “BBQ stew,” which is Georgia Brunswick-style with the addition of some cubes of chopped pork.

Ric swears by Mike & Ed’s, and likes the meat here better than Columbus’s very well-known Country’s, although he concedes that Country’s sides are unbeatable. Personally, I think Country’s is a little better on every front, though that’s not to take away from Mike & Ed’s. By any estimation, it really is a great meal they serve here.

For a second course, I had another place on the outskirts of town in mind, but we all got confused which way out of town I was talking about, so that restaurant will have to wait until we swing through again later in October on our way back from a trip we are planning to Providence Canyon. A backup plan, already established, saw us driving down what Ric calls “the Montgomery road” to the community of Ladonia and a stop by 13th Street Bar-B-Q. 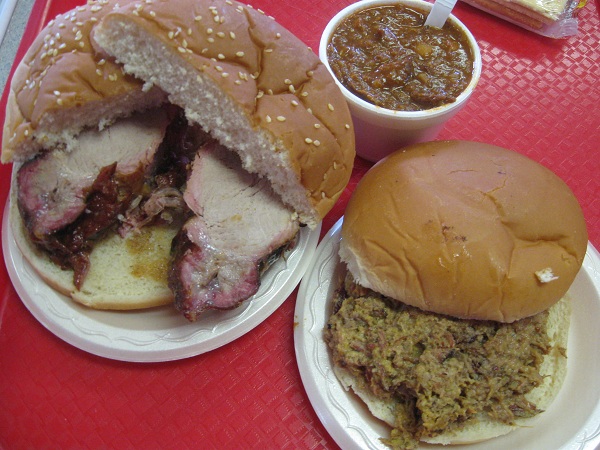 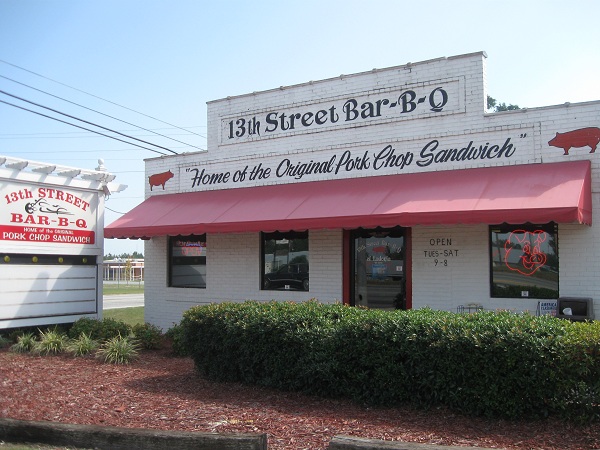 I love this building. Surprisingly, the restaurant and its smoker are fairly new, but of course the building has been there for more than fifty years. It has previously seen service as a grocery store and an auto parts shop.

We ate quite light here, and I ordered one of the celebrated pork chop sandwiches while Marie, having tried this region’s cubed take on chopped pork at Mike & Ed’s, went with a shredded, chip style here. Unfortunately, they didn’t quite listen when I asked for it dry and sauced the shredded sandwich up with their mild mustard style. Marie, who doesn’t really care for mustard sauces, resigned herself to her small side of Brunswick stew. This was quite uncanny. When you acknowledge that every place’s recipe for stew is just a little different, you should never find quite the same style twice. But knock me down if this stew is not almost identical to that served at Old South in Smyrna. That’s no complaint; I quite like that stew, and it is in fact my mother’s favorite, but it was darn weird to see its clone down here.

Speaking of stew, we talked about it a good bit here, as I filled Ric in on my recent, not-entirely-satisfying experiences with some celebrated barbecue joints in Atlanta’s northern burbs, and the frustrating foolishness of places offering stew – stew! – as a more expensive “premium” side. Ric’s in complete agreement; that’s ridiculous and pathetic and anyway, nine bucks should be the ceiling for a two-side plate of barbecue. Those eleven dollar, twelve-forty-six, thirteen-fifty plates that I have had lately don’t warrant repeating.

Anyway, the stew here was mighty good, but we didn’t really think all that much of the chipped pork. Even if it hadn’t been drowned in the sauce, I think there’s a point at which you’ve cut the flavor away, and it is shredded so fine that it’s past that point. Still, at a wonderful $1.49 a sandwich, it’s worth a try to see whether you disagree. The pork chop, on the other hand, was very, very tasty. They smoke this beauty for only four hours, but I would have figured it needed to go a little longer to get it as tender and packed with flavor as this is. It’s just a little drier than I would have wished, and so it needs some sauce. Of the two on the tables, the hot sauce here goes much better with it than the mild. This sauce is very thin and peppery and has a wonderful kick. 13th Street also offers a third sauce which they call “XXX” and keep behind the counter. All three are also sold in jars to take home.

Those two are probably Phenix City’s best-known and most popular barbecue places, but there are certainly others in the area that warrant a try. One thing is certain; anybody looking for a population center densely packed with barbecue restaurants to do a serious tour of local specialties would do well to come to Columbus and Phenix City. There is just a pile of good eating around here, and in the next chapter, I’ll talk about a couple of places that actually serve some other things just as good as the region’s barbecue.