Florida does not have a reputation for barbecue, that’s pretty clear. My hypothesis is that, more than any other southeastern state, it’s where people move or retire with their hometown’s recipes and try to bring those to life. So you’ll get individual restaurants with very distinct and individual flavors, but never a general sense that in this-or-that region, you can generally expect this kind of sauce or that kind of side dish. I can give you general ideas of what you may find in northwest Alabama or the South Carolina piedmont, but in Florida, it’s every restaurant for itself.

Obviously, this hypothesis requires months and months of fieldwork before it can become a workable theory. I take checks, money orders, and great big grants from Mobil.

We were down on Saint Simons Island for Christmas and my sister-in-law needed a ride back to the airport in Jacksonville. I was happy to oblige since this not only gave us an hour and a bit to chat, but it also left me in Jacksonville by myself without anybody else to entertain. This meant that I could drive around wherever I wanted and see a little more of northeastern Florida. Urbanspoon pointed me toward the town of Callahan as sufficiently away from the city limits, and so I left the Jacksonville Airport and headed north up FL-115 for several miles. This road meets with US-23 – that’s right, Buford Highway itself as we know it in Atlanta – and the frankly ridiculously-named Highway A1A in Callahan, a town of about 1000 people located in Nassau County about twenty miles from the southeastern border of the Okefenokee Swamp.

Like other hobbyists before me, I was confused by the restaurant’s sign sporting both a drawing of a pig and the slogan “The Chicken House.” I drove right past the most distant location of a six-store area chain called The Pig, passing on it in favor of the underdog, and wondered whether they were also likely to champion the quality of their chicken in favor of their pork. Like I say, more fieldwork is needed. 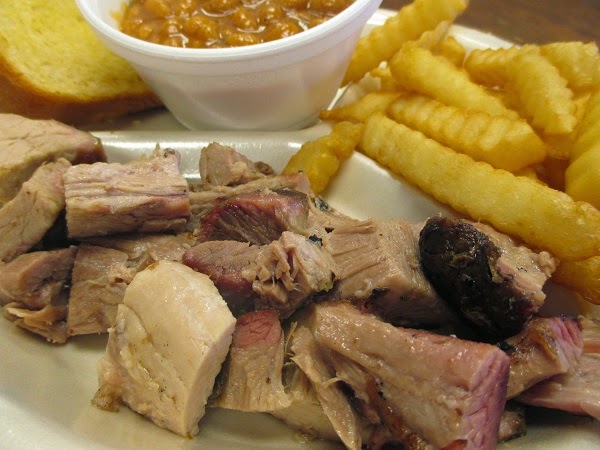 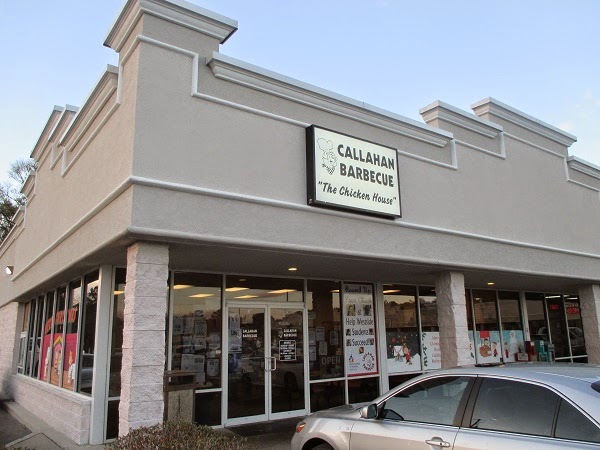 The owner, Danny Murray, originally set up shop in an old fast food place about a half-mile away, and moved to this strip mall location in 2006. He has an army of very loyal customers. There are about a thousand residents in Callahan? They all eat here. Every one of them. I came on a Tuesday at 4 pm and the place was packed. There’s a drive-through line which, comically, winds its way around the back of the strip mall, past the broken-fenced area where two Southern Pride smokers can be spotted.

My first taste of Florida barbecue, however, was tempered by the knowledge that the locals use that slogan “the chicken house” as the nickname for the restaurant, and they order fried chicken here. After working my way past the people waiting patiently for their carry-out orders and to the counter to place mine, I took one of two available seats and noted that every single person seated around me was enjoying either fried chicken or chicken sandwiches. I didn’t see a soul trying the barbecue. When it emerged, it was decidedly okay.

The chopped pork is cubed, as is often seen in eastern central Alabama. I was reminded of what I am familiar with at Mike & Ed’s in Phenix City in particular. A variety of sauces are available, the most interesting of which is a mustard sauce that tastes very, very similar to the mustard sauces in Atlanta’s western suburbs. I have written many times before about how those joints in the Hudson’s/Wallace tradition will often serve a lethally hot mustard sauce packed with cayenne pepper. This tasted very, very similar, albeit with considerably less heat, and less cayenne visible in the sauce*. I was genuinely fascinated by the examples of other regions’ barbecue traditions making their way to Callahan, but to be bluntly honest, this barbecue was not very smoky, and needed a pretty large amount of sauce to enjoy it. I liked the baked beans a whole lot more; these were amazing.

But this chicken… clearly I did not order the house specialty here. The mobs who call this place “the chicken house” sure do seem to be onto something. I’m glad that I’ve expanded our barbecue map just a little bit, but I’ve been kicking myself since I took that long drive east along Highway A1A to I-95 for not ordering that chicken to see what the fuss was about.

(*Note: Since writing this entry, I’ve traced a possible origin of this mustard/cayenne sauce to the same region that the cubed barbecue seems to come from. Chicken Comer developed a sauce like this in Phenix City in the 1930s, selling it door-to-door, and a restaurant later followed. The restaurant closed in the 1990s, but was reopened by new owners in Columbus GA who continue serving this sauce. (7/15))