In September, Marie and I visited a pair of barbecue restaurants in Phenix City with our friend Ric. When I wrote about those places in October, I noted some striking similarities between them. Our most recent trip to the region has shown more things in common. There’s a regional style here that warrants a little more comment than I have provided previously.

I noted before that both Mike & Ed’s and 13th Street offer their pork in three styles: sliced, chopped, and chipped. Chopped pork down here comes in little cubes of meat, and chipped is really finely shredded and, often, served pre-sauced. Our trip to Providence Canyon took us down to the small city of Eufaula, 45 miles south of Phenix City, and where the Chattahoochee widens into the massive Walter George Reservoir. There, we visited Phil’s BBQ, which I first read about when 3rd Degree Berns gave it a pretty good report. Again, the meat here is available sliced, chopped or chipped, with the standard sauces being mild or hot varieties of a thin, mustard-based style. Unfortunately, 3DB reported that the restaurant has seven different sauces. We only noted the two on our table, which is a shame, as I would have liked to have tried the other five. (3DB also reports that Macon Road BBQ, in Columbus, also uses the sliced/chopped/chipped style with a thin mustard-based sauce, adding another local restaurant to the mix.)

Phil’s has been in business since 1991, although I understand that Phil himself sold it after just a couple of years, the good name and reputation ensuring that the new owners would have their work cut out for them following his head start. It’s a heck of a good restaurant. They employ several young servers, who seem to delight in surprising guests with their speed. After we sat down, we saw several people do the same double-take that we did, being told at the register to please take a seat, that somebody would bring their food to them, and no sooner did they finish getting their drinks than their meals were ready, a smiling twenty-something girl following them to their tables. 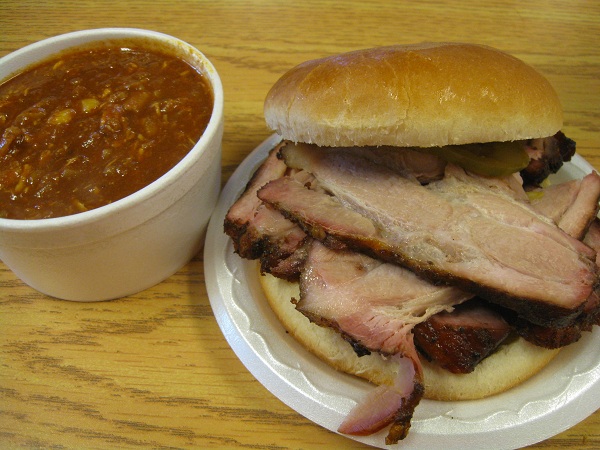 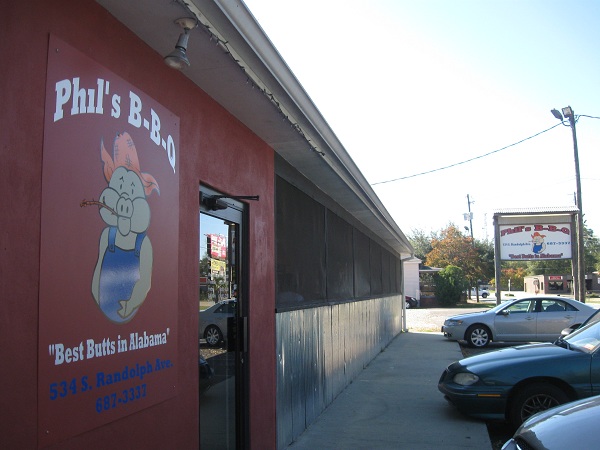 I spoke with the gentleman in charge of the pit – and it’s a beauty, a big, red, brick monster – about this regional style, but I don’t know that I came up with the right questions. Writers outside the southeast tend to just call mustard sauce a South Carolina specialty, so how the heck did it just up and jump across the established tomato-vinegar corridor of middle Georgia and become the dominant style of Columbus and this long strip of Alabama? Can we trace it, and the “chipped” barbecue, back to a single family? I didn’t get the gentleman’s name, but he was not certain. He also explained that what they call “chipped” is the same as what we Atlantans call “pulled.” I’d have to disagree with that; chipped barbecue might be pulled pork, but it looks like it’s gone through a wood chipper before it’s served.

Much more exploration can, and should, be done in this corridor. Eufaula itself seems to have another three barbecue places to try – we drove past one on our way to Phil’s and I’ve been kicking myself since for not stopping – and there is also the highly-regarded Martin’s in Fort Mitchell on AL-165, between Eufaula and Phenix City. Martin’s was actually our original first choice to visit after leaving Providence Canyon. I’m glad that I phoned first and learned that Martin’s is, disagreeably, closed on Saturday. I just cannot wrap my brain around barbecue restaurants not being open for lunch on Saturday. Plus there are perhaps another half-dozen joints in Phenix City to try.

About fifty minutes later – it would have been forty, but we stopped to fill up along the way at a pump that was dripping out gasoline about one drop at a time – we made our way through Phenix City a little northwest to the small town of Smiths Station. This is the home of Corner Que, a teeny little shack that I have gone past a couple of times and finally got around to trying. Man alive, was this place ever worth the wait. I didn’t get any closer to learning the origins of chipped pork – they don’t offer it here – or the thin mustard sauce – that’s all that they offer here – but I had a terrific conversation following some excellent food. 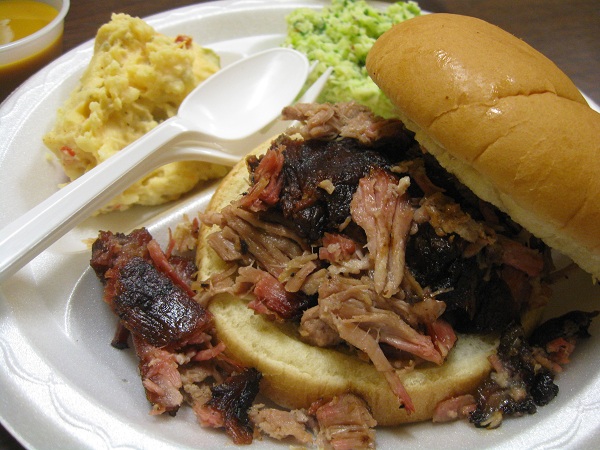 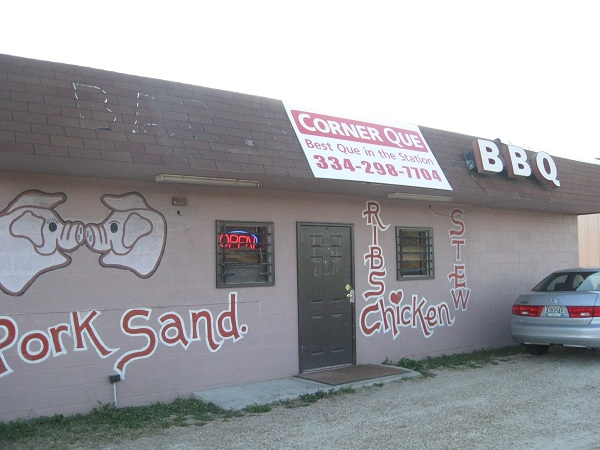 Lest I forget any other reasons to recommend Corner Que to our readers, note this: Corner Que completely filled Marie and me with excellent food, for less than just about any place I’ve ever been for barbecue. Not long ago, I made enemies of some sockpuppets for noting that I left a place hungry after spending $12.46 for a meal. Marie and I, together, didn’t come to that here and we left feeling like we’d eaten like royalty. Low prices are standard in this region – 13th Street’s $1.49 chipped sandwiches are, with good reason, legendary – but if there was ever a reason to get out of the Atlanta ‘burbs and see what you can get in the country, I’d say this was it.

The pork here is chopped, and it is very good. Between us, Marie and I enjoyed some completely amazing homemade sides. The slaw, which was perfectly balanced and green, the stew, thick and oniony, and the potato salad, surprising and spicy, were all first-rate. Honestly, I might enjoy Mike & Ed’s pork just a little more than this, but these sides just knock everybody else in the region cold. But there was better to come.

The small space was very busy and crowded, and Marie felt a little self-conscious about nursing with so many people bumping elbows. Anyhow, the way this baby of ours happily kicks and kicks when he’s eating, he’d probably knock the fork out of somebody’s hand in a space this small. So Marie retired to the car to feed him there while I finished up and spoke to the family in charge. We’ve eaten at many family-run businesses before, of course, including (in yesterday’s chapter) the notable one in Georgia just a few hours previously where we were literally in the dude’s house, but it’s a rare and happy day when you feel like you’re in a family’s kitchen, hearing stories about their food and their business, daughters and granddaughters working alongside and sharing tales with a smile.

No, they couldn’t tell me where chipped pork came from, and the old gentleman who opened the place would only confirm that his mustard sauce was an old family recipe. Clearly, I need to come along on one of those Southern Foodways Alliance expeditions and watch those cats at work to see how to get people to share a little more of this desired history. Speaking of which, of course, I also need to go by Chuck’s in nearby Opelika, where Chuck Ferrell has been serving for thirty years. It’s Mr. Ferrell’s contention, as related in this SFA interview (PDF), that an uncle, who used to run the Smokey Pig restaurant in Columbus, was the first to use the mustard sauce in the region, about sixty years ago. Since then, it has become the dominant style in a corridor about seventy miles deep and twenty miles across.

But it was a super chat nonetheless, and my curiosity was rewarded with a sample of their ribs, which were completely, devastatingly, amazing, and their yummy lemon sponge cake, which liked to have evaporated upon opening, it was so light and airy. “You let your wife have some of that cake now,” I was told. “Must I?” I replied, greedily.

But I did what I was told. When you’re a guest in somebody’s kitchen, you do what you’re told.