Cheryl had mentioned to us when Marie and I were in Columbus in September that she would be busy on the last weekend of October, and to try not to schedule a trip down that weekend. Indeed, we had originally planned to make our visit to Providence Canyon on the 22nd, but circumstances conspired against us and we ended up buying a car that day and coming down on the 29th, when, it turned out none of our other friends in the area were free, either. Fortunately, I’ve made just about enough trips to Columbus over the years not to get completely bewildered like I used to. That’s just as well, because the directions that I had printed for this road trip only went as far as the two Alabama stops in the previous chapter.

I had promised Marie a trip to Country’s after we set it aside last time, but we made a couple of other stops first. To begin with, we pulled into a Publix to pick up some twelve-packs of Buffalo Rock and Grapico, which we still can’t get in Atlanta. Nor can we get any answers why the Publix stores down there can’t ship ’em to the Publix stores up here. Truth be told, it’s a little aggravating. Don’t get me started on the lack of Blue Raspberry Crush up here.

After that, we did something pretty unusual for us. We visited a restaurant to get food for the next day. I’d read that Cafe le Rue offered some of the best gumbo in the state, among other treats. Since barbecue was on the evening agenda, I decided to just get an order for lunch the next day. The restaurant is small and cozy, a perfect place for date night, and they have a decently deep wine list. The gumbo reheated well, and it was terrific, really rich and mildly spicy. They even threw in a slice of French bread. I bet it’s really something else served fresh. We’ll have to try it again sometime. 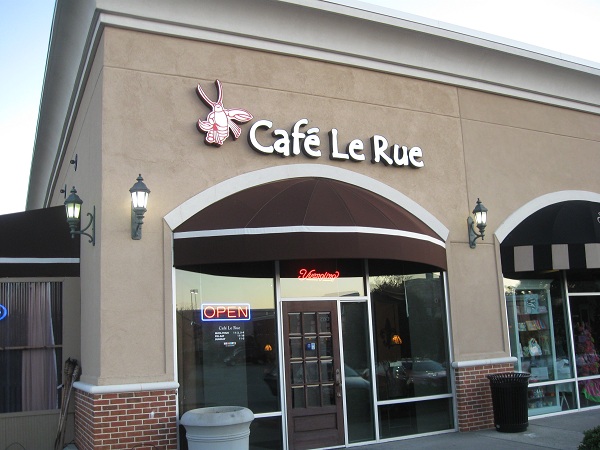 So, onto Country’s. For those of you who missed out, the timeline goes like this: my friend Matt introduced me to this incredibly popular local chain about ten years ago. Except for those times that I just went through on the way to Mobile, I think that I’ve eaten at one store or another on just about every visit since. I heard that Ronald Reagan had died while eating at the original location. I finally got down here with Marie last year, and she gave me a sweet earful about how much she loved it, and how she couldn’t believe that I took so long to bring her to Columbus to try it. We were poised to visit again in September, but Ric and Maggi persuaded us to go to Black Cow instead, where Marie was not really thrilled with her meal. So, Country’s was emphatically on the agenda when we returned last month. And Marie, love of my life, for whom we made this trip to Country’s, decided that three barbecue sandwiches in a day had been plenty, and she wanted a veggie plate. Women!

So anyway, the Country’s that we visited on this trip is the newest of the three in Columbus, where I’d only eaten once before. The building was erected in the late 1930s as a Greyhound station with a large interior diner. There’s a lovely, curving art deco style to it that fans of this architecture need to see. In the 1950s, Greyhound apparently moved to a smaller location as part of the downsizing that left the wartime diners and cafeterias behind. The rival company Trailways moved into this facility, but I’m not sure whether they used the restaurant much. It was eventually shuttered and left in disrepair for a short time before Country’s took it over in 1988. In one of the neatest feats of restaurant design around, the building actually incorporates an old bus which has been gutted and turned into a small secondary dining room. Kids love it. Speaking of kids, there were a heck of a lot of ’em around that evening, in costume. We were not long from being hugely inconvenienced by them.

But before we get to that, it’s always worth praising Country’s for their really excellent food and service. There’s no room in the bus depot Country’s for a bluegrass band like the one off exit 6, but there was a TV, so I could see Georgia squeak out that lovely and wonderful win over Florida. I suppose Marie’s veggies were all right. I ordered the Saturday night special of a chopped chicken sandwich and a side of salad for $6.39 – I really, really like the fries here, but I figured that I needed some lettuce after everything else we’d eaten today – and, because I did not read the menu closely, was sad to see that the sandwich came drowned in a sweet brown sauce when I was looking forward to Country’s mustard sauce instead. The server, who was awesome and sweet, replaced it. She actually told me that she’d “work some of our Country’s magic for you.” Country’s was started, and is still co-owned, by a fellow named Jim Morpeth. Jim needs to identify that server and give her a bonus for coming up with that line.

Actually, following up the discussion in the previous chapter, the next time the road takes me to Columbus, I’d love to sit down with Jim and talk about his experience with chipped meat and mustard sauce. He may not have the older family connections that Chuck’s in Opelika and The Smokey Pig here in Columbus share, but anybody who’s built a popular colossus like this probably knows a thing or two. The trouble would be finding a time when Jim’s actually not working his tail off and Country’s isn’t packed beyond capacity. I’ve eaten at these stores more than a dozen times, and I have never seen it such. 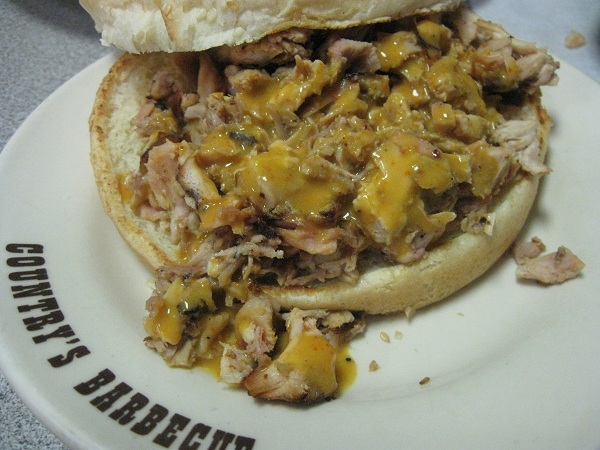 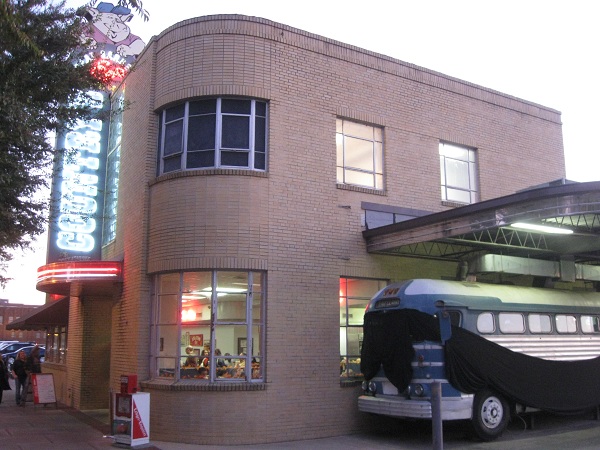 For dessert, I resolved that we would go to the other place that we put off visiting on our last trip down, Fountain City Coffee. When Ric lived in a small apartment nearby, he would often come here, and I recalled that they had a good selection of pastries and cookies. We left without stopping last time as the baby decided he wanted to get back in the car and sleep. This time, he let us know that he was really hungry, and I thought this would be a good place for Marie to nurse.

Even though we were within walking distance, we were in Country’s lot, so, having tempted parking karma at least twice in October, I decided it best to burn the gas and move the car a little closer. However, we couldn’t get as close as I’d hoped; Broadway was blocked off. I’ve seen this happen before, when the street is closed for a car show or something. So we detoured around it while the baby whimpered, and as we looped around past the Springer on 10th, we both felt that uptown parking was not going to happen, and we’d have to pull into a side street or that big hotel where Patrick Troughton died in ’87 to nurse the baby. I was actually shocked when we found a spot on 10th in front of the CSU dorms, right around the corner from Fountain City. 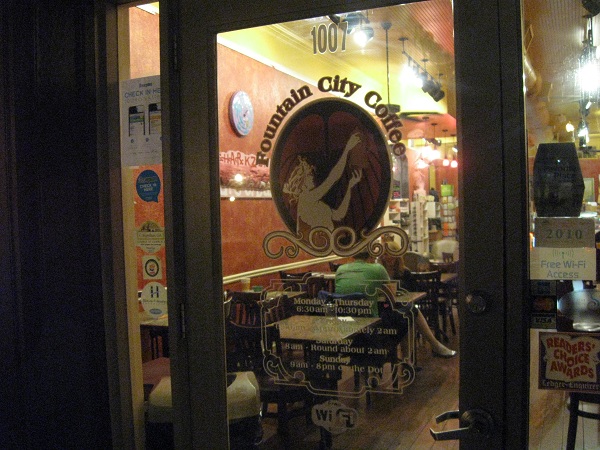 Unfortunately, Fountain City really didn’t come completely through for us. They were already sold out of desserts, except for gelato, and my memory of this place being as full of comfy couches and seating is flawed. There are indeed several chairs and tables, but the handful of larger, cushiony chairs for a nursing mom is smaller than I thought. Marie did find a place to nurse and enjoy a cup of tea, but we both joked that if only we knew a Columbus State undergraduate to let us into that dorm, the couches in the lobby looked really comfortable.

In its defense, I’m sure Fountain City is all kinds of awesome earlier in the day, before they sell out of pastries. They sell panini sandwiches here, and staff-mixed blends of coffee concoctions, and were probably the first place in town to offer wi-fi connections for their guests. They still sponsor an open mic night that has been getting a great turnout for years. The tea that Marie had and the Mexican Coca-Cola that I sipped could have come from anywhere, but Fountain City’s wonderful service from such a great young staff made the visit as pleasant as could be.

Then we left, and the parking karma that we exhausted earlier in the month, sneaking away from Everybody’s Pizza, and later from Hd1, caught up with us. All those costumed children that we saw earlier were participating in a fun run through the uptown streets. Broadway had been closed earlier, and, after we parked, the police shut down 10th.

We sat in the back seat and sang lullabies to the baby while pumpkins and Disney princesses jogged behind us. I’m restless and impatient by nature. Half an hour of that and I was apologizing to restaurants a hundred miles away for misusing their parking spaces. Remember, friends: car-karma can get you.