The situation was grim. Marie had requested that we spend the second weekend of October relaxing. After several out-of-town trips in September and the madness of the convention over the first weekend of the month, she wanted a Saturday where we didn’t do anything. That meant that if I wanted some new things to talk about, then on Friday night, I needed to please everybody with a couple of small meals and a couple of great desserts.

There was, first, the problem of my daughter. I had decided that I wanted to go back to Everybody’s, the terrific pizza joint by Emory’s main campus, but I was not keen on being so far away from my daughter while she was at a football game in the suburbs. She didn’t want to come eat pizza. “You’ll just put anchovies on it,” she said, not unreasonably. A bribe was necessary.

“What if we get ice cream afterward?” I asked. She declined.

“What if we get Jake’s ice cream, then?” Oh. That changed things. She’d drop the lead singer of My Chemical Romance on his butt for a scoop of Jake’s.

Then Marie piped in. She can’t eat ice cream, as I should remember. The dairy gets in her breast milk and gives the baby stomach aches. We would have to get desserts from two different places, at least once I figured out where you can get any Jake’s these days. She also wasn’t keen on pizza for the same reason. Maybe we could get a hamburger somewhere instead.

Imagine. There are some people in this world who would handle this problem with a single trip to a Picadilly Cafeteria. I hope we never turn into those people. In point of fact, I wouldn’t mind if this baby one day piped up to demand we insert stops for seafood and chicken mull into the menu. While we live in a city as large as Atlanta, there’s not one blessed thing stopping us from having the best of all possible worlds in one evening. Well, apart from the chicken mull. We’d have to drive to Athens for that, but we could come back here for the ice cream and cake.

The children and I picked up Marie at work, allowing her fellow employees to admire the baby for a few minutes – well, and the tween girl as well, I suppose – and giving Marie a chance to feed him. We then made our slow, agonizing way from Dunwoody through Friday “rush” hour traffic to Decatur.

Everybody’s has been serving the community for forty years now and, while fad and fashion have thrown other pizza places in the limelight, I still believe that Everybody’s serves one of the best pies in the region. Vingenzo’s might have knocked it out of my Atlanta top five, but it’s still a great pizza and worth a visit. This was actually the slowest I’ve ever seen it, but we arrived before the Friday dinner rush really got going. 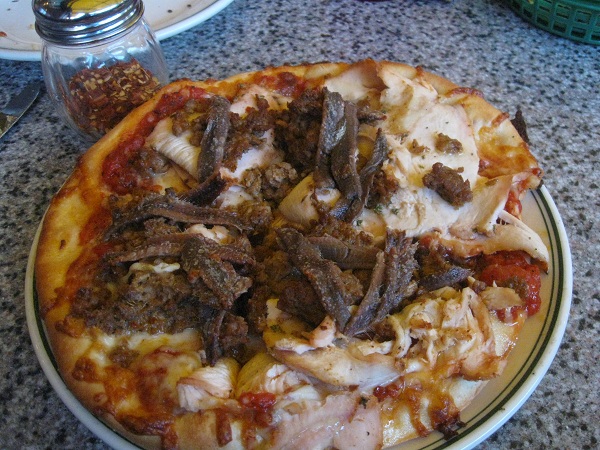 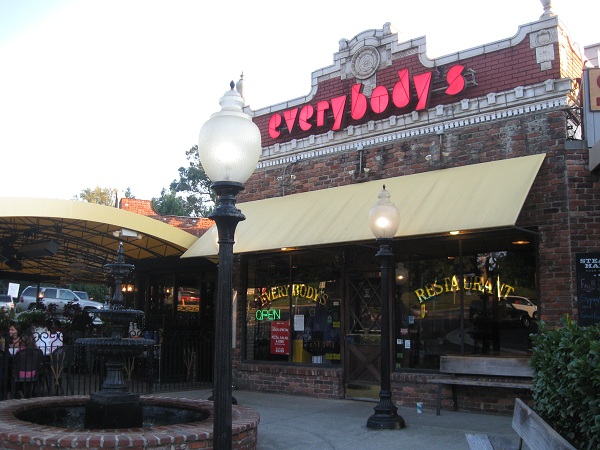 With Marie planning for a burger in a few minutes’ time and the threat of anchovies infuriating my daughter, they simply shared a salad and some amazing breadsticks. My individual pie was, unwittingly, a carnivore’s delight, with anchovies, chicken, and Italian sausage. I promise that I intended to have them with tomatoes and peppers, but something went stupid in my brain once I sat down. I have no legitimate excuse, but good grief, was it ever good.

Afterward, we walked down to the end of this strip mall to Wonderful World. I should note that we took the risk of leaving our car in Everybody’s lot and leaving the premises. I have heard, before and since, that this is never a good idea. We didn’t get towed or booted, but I don’t advise doing this.

Wonderful World has very quietly been grilling up some of the very best hamburgers in the city, without attention or hype, sliding their sliders right under everyone’s radar during the last three years of the city’s hamburger madness. I’m certain I never heard of this place at all before I looked up Everybody’s on Urbanspoon the day before we went down and was amused to see the name of this place listed as “nearby.” The name tickled me, because I frequently get one of two different songs named “Wonderful World” stuck in my head. 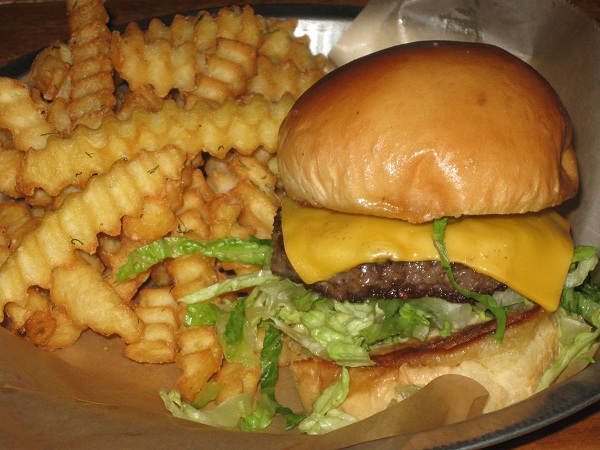 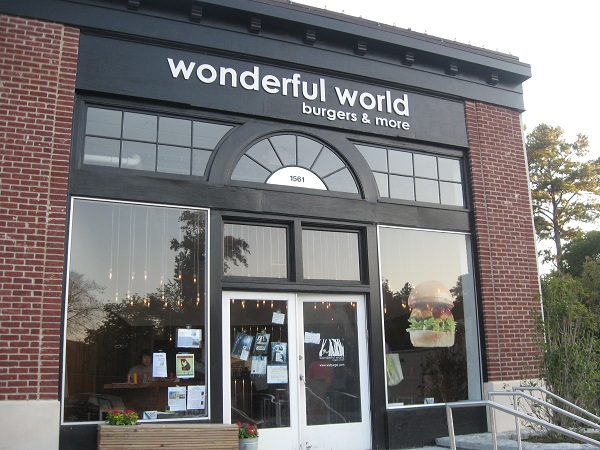 Anyway, Wonderful World is a very small side venture by Stephen Chan, who has opened a small chain of cafes called Tin Drum around the city. It has received virtually no attention from my fellow hobbyists, although Evan Mah, from The Toothfish, gave it a good review when it opened two years ago. Two years! This is one of the best hamburgers in the city, for pete’s sake. Folk need to get over here and try one.

They’re quite small and very nicely priced. Most are under $3 and are made from fresh, local beef, never frozen. The fries are also fresh and just incredibly yummy. We’ve had some good burgers lately. In fact, we’ve had a lot of ’em. This knocks just about all of them to the side, easily ranking among the juiciest and tastiest our town can offer. I had the WonderfulBurger, which comes with cheese, lettuce, pickles and a house sauce. It was just perfect.

I really like the interior decor a lot, too. Slotted wood paneling covers the lights behind them, resulting in a very comfortable and laid-back vibe. It only seats a couple of dozen at long, communal tables, but I think that once people get their food here, they’ll be in no rush to leave. It’s a complete delight, but we did have to make our way. I had promised the girlchild some Jake’s.

(Before we leave, however, a follow-up note. One of those songs that I enjoyed replaying in my head was “Wonderful World,” a track from one of David Sylvian’s countless odd projects, Nine Horses. As Tin Drum was also the title of Japan’s last studio album, I amused myself concluding that Chan must also be a Sylvian fan. This was confirmed a couple of weeks later, when I was walking down Broad Street downtown, passed one of the Tin Drum locations, and did a double-take when I saw, through the window, a giant blow-up of the front cover of that Japan LP. Chan makes terrific burgers and he appreciates one of my favorite musicians. I’d have said favorite, period, before he released that awful Manafon. Yeeesh.)

Now, not long ago, there were a few more Jake’s locations than there are now. Most magical was the great one in Decatur, at the end of the strip mall where Wuxtry has long resided. We could kick back and indulge in ice cream there for hours. It would appear that only a single Jake’s location is left, although they supply a few other coffee shops and places with their amazing product.

Inman Perk Coffee is one that Marie and I had visited once before. It’s a splendid little place where locals on laptops are always kicking back. Honestly, it’s next to impossible to make much comment on a coffee shop’s product, as I don’t drink coffee, but I figure, as long as the ice cream is good, it’s worth a visit. A relaxed and comfortable environment like this is just a bonus. 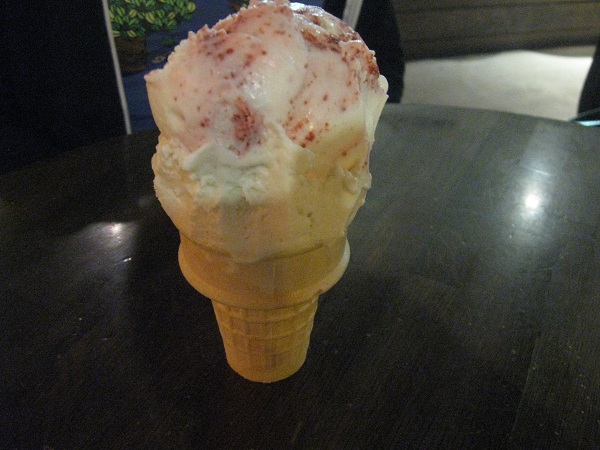 Unfortunately, Marie was deprived of this most excellent ice cream. She departed to change and feed the baby, possibly so her heart would not be broken that we were indulging in front of her. Mine was a cherry and vanilla double-scoop – their reliable “brown sugah vanillah” has been either replaced by or supplanted with a “thrillah vanillah” that I found myself enjoying even more.

Marie’s treat was a few miles up the road at OK Cafe. This venerable meat and three buffet diner has been around since the mid-eighties. Their long line of customers waiting for a table is so legendary that they installed a big digital sign out front informing anybody driving past how long the current expected wait is. 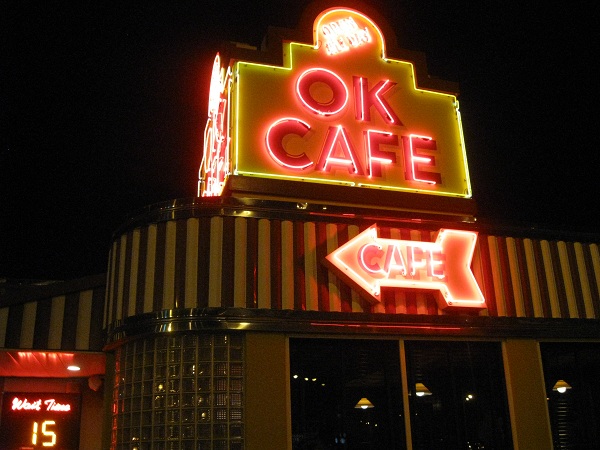 While the OK Cafe prides itself on its classic American diner food, with their chicken and fried trout particular favorites of everybody, we were just there for dessert. Marie got a big slice of chocolate cake. It was not a ridiculous, oversized chunk of a thousand calories, but something sensibly-portioned and tasty. They do fantastic work here, and getting to-go orders is incredibly simple.

This was a fine evening out. We discovered someplace new and fantastic and each of us came home satisfied. I’d call it a success all around. There remained, however, the problem of Marie decreeing the next day to be one of relaxation and late sleeping. That was fine, because I knew that we’d need to have lunch sometime, and I had a plan for that.

(Update, 3/24/12: Sadly, the Wonderful World shuttered this week to make way for another Tin Drum. Right across the street from a Doc Chey’s…? Wow.)